When it comes to muscle and performance, Charles Poliquin is so far ahead of most of the non-Testosterone pack it's scary. He's not only on the cutting edge, he's the guy who sharpens it. We're glad to be reviving his famous Q & A column here at T-Nation.

Abandon the Back Squat?

That said, you can't throw away all your tools. I partly agree with these coaches, but I'll keep the back squat in my toolbox. I use a lot of split squats too. There are over seventy ways to squat; saying you need only one is like saying you only need a hammer to build a house.

The best front squat I've ever seen was by a 165-pound weightlifter who front squatted 534 pounds. This wasn't an American college football version either; this guy was ass down, left a stain on the carpet. The strongest front squatters I've seen are guys doing around 3.3 times body weight.

As for the style of front squat, I prefer the Olympic version rather than arms-crossed style. Now, if the lifter's arms are too big or he lacks flexibility, then he can use straps.

One thing to remember when using front squats is to never do more than six reps per set. This is because your rhomboids tire out isometrically before your squads tire concentrically. You don't want to get to a point where you're squatting with a kyphotic posture. That's when accidents happen.

Question: Some T-Nation coaches advocate training the whole body in one session; others usually use a body part split of some sort. The debate is endless, but I'd love to hear your thoughts on it!

Answer: I'm the first one to want to improve on any training system, but I do not know anyone successful in the strength coaching business who uses full body routines exclusively.

I've trained Olympic medalists in sixteen different sports, from energy system sports such as swimming to short-term explosive power sports such as shot put. For almost every single one of them, 70% of the time, I've used split routines and switched to whole body routines as their competition was nearing. Whether it's Adam Nelson who won the World Championship in the shot put or Dwight Phillips who won it in the long jump, they all trained with split routines.

Workouts have to be short and effective, and when you train for relative strength you have to do a lot of sets. If you do a lot of sets, you can't do a lot of exercises. Athletes need split training to get adequate recovery.

The key is to recruit as many motor units as possible, and you have to think about the law of exercise order. There have been a few good studies done on this, but here's the Reader's Digest version:

I've always found that when you get to the elite level, most athletes do best just doing two primary exercises per workout using multiple sets (like ten), and then training again six hours later.

Every single Olympian I've trained used split routines. I've been in this profession for 26 years and no one has ever convinced me, by their results, that full body routines are the only way to go.

Having coached at three different Olympics, I've had the opportunity to talk shop with many successful colleagues. Whether they were from Norway, Germany, or Finland, they all came to the conclusion that split routines were far more advantageous than total body routines.

Question: At one time we were told that fasted cardio upon waking was best if your main goal was fat loss. Then we were told that it was a bad idea because it could be catabolic. Now we hear about semi-fasted morning cardio. Which one is really best?

Answer: I don't agree with any of them. We're made to throw a rock at the rabbit, not to chase it. We're basically anaerobic animals. The quickest way to get lean is through diet.

If you look in the world of sports, triathletes and marathon runners have body fat percentages ranging from between 11 and 14%. Four-hundred to 800 meter runners have body fat between 4 and 6%. Exercise intensity is the key, not duration. Take a picture of all the fat cows on the bikes at Gold's or World Gym. Go back next year and compare: they're all still fat or more likely: fatter!

Many people are now starting to agree with my German Body Comp principles: the best protocols for fat loss are the ones that increase the amount of lactate you produce. People from all over the world have told me that it's the best program they've used for their fat athletes or personal training clients. In fact, German Body Comp is still the best selling book I've ever written.

According to the latest research, GH production is directly correlated with a drop in blood PH. So when you produce lactic acid, as with German Body Comp, your blood PH goes down so your GH goes up. If people need to lose a lot of fat quickly and don't have much time to train, this is how we train them, four hours a week.

British researchers have noted the importance of the caloric cost to recover from that exercise. It has as much to do with the hours following the workout as it does with the actual workout itself.

And by the way, morning weight training isn't ideal either. Basically, the nervous system doesn't fully "wake up" until three to four hours after you do. But the good news is that the body will get used to anything, so you will eventually adapt to early morning training.

The Burn and Size Gains

Question: For hypertrophy, is the "burn" or the "pump" necessary?

Answer: There's a lot of ways people increase hypertrophy. Look at an Olympic weightlifter who never gets a pump. Look at a strongman competitor. They still hypertrophy. 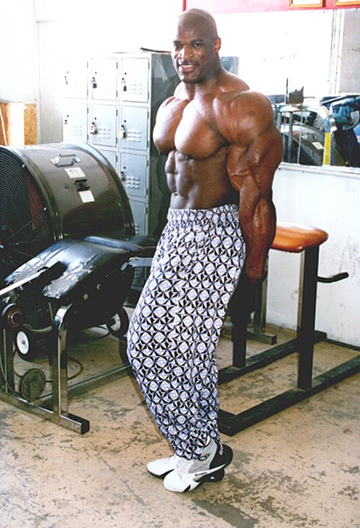 Look at pre-1980's bodybuilders, back when the steroid usage was fairly light compared to today. Back then they trained as part of a subculture with weightlifters and powerlifters. By society's standards, people who lifted weights were weirdoes. So all these people lifted in the same gyms and shared training methodologies.

I saw Robbie Robinson train in Norway with a Norwegian powerlifting and bodybuilding champion. Robbie, especially for his age, is a strong dude. He was kicking this young guy's ass. You could tell these guys came up in a culture where you learned to lift more to get bigger. These days I've seen pro-bodybuilders curling with 35 pound dumbbells, but they still have high levels of hypertrophy.

The forgotten element of hypertrophy training is the principle of overload. People don't try to lift heavier, they just double their drug dosage.

So, "going for the burn" is one way to hypertrophy, but not the only way. For example, if I make you do eccentric squats and eccentric chins, you're going to put some weight on, but you don't have a burn.

Question: You've written that 68% of Americans are pre-diabetic. Insulin is the hormone of aging and inflammation, you said, and "managing insulin is one of the best ways to promote health and longevity." Okay, so what's the single best thing a person can do daily to do that?

Answer: Take fish oil. Research has shown that if you take three grams of fish oil with a high sugar meal, your insulin response is much smaller.

Now, I've heard some people suggest that you take all your fish oil for the day at one time. But anyone who knows what they're doing when it comes to functional medicine will tell you to spread it out. Would you eat all your protein for the day at once?

Question: Looking around most gyms, what's the most beneficial but neglected exercise you can think of?

Answer: The snatch-grip deadlift, specifically a snatch deadlift on a four inch platform. The idea here is to get a large range of motion by standing on the platform and using the wide grip.

If you told me you were going to jail and only had a barbell and didn't want to get raped in the showers and could only do one exercise to put mass and strength on, then I'd tell you to do the snatch deadlift on a platform.

This exercise alone makes people gain weight like crazy. Any time I have someone who needs to gain weight fast and doesn't have a whole lot of time, I have them do snatch deadlifts. And with the snatch grip deadlift, straps are okay because you'll be doing reps above three, but don't use them until you get to your working weight.

If you think about it, this is the opposite of the sumo deadlift, which shortens the range of motion. Likewise, some powerlifters will lift in ballet shoes to shorten the ROM. What we want to do here is lengthen it. The snatch grip and platform will take care of that.

Question: Some bodybuilders say they avoid direct oblique work to avoid developing a blocky physique and thick waist. Should they really be worried about this?

Answer: You mainly see that kind of oblique hypertrophy in throwers. The average guy shouldn't worry about this, unless he's throwing five days a week for ten years.

This is why I'm against those Tornado Balls and other things recommended by coaches who can't get anybody strong. The core is most recruited by squats and deadlifts, even though there's no rotating action.

Question: Is there ever a reason for a non-powerlifting gym-rat to perform 1RMs?

Answer: Sure. Remember, hypertrophy is a function of a certain load and a certain amount of volume and time under tension. Thing is, if a guy is stuck at doing sets of ten at 200 pounds and he hasn't improved since Jimmy Carter was president, he probably needs to test his maximal strength and work on that.

So if he's benching 200 for ten, he's probably doing around 250 for a single, plus or minus ten pounds. If he goes on a cycle where he gets his bench up to 280, then he'll then be able to do ten reps with 230, then he'll see growth again.

He doesn't necessarily have to perform singles though; a safer way to train with high loads for the average guy would be six sets of three.

If a trainer were to come to us and say he had a method of ab training that would reduce the waist size of anyone in three weeks, we'd ask him what he was selling and then kick him out the door. Luckily, Don Alessi was a fast talker and before we could introduce him to the sidewalk, he'd convinced us that he had some pretty nifty ideas.
Training
Don Alessi August 10

Most people leave out this part of the ab training equation. Don't do that. Try this challenging exercise.
Tips, Training
Mike Robertson January 28