Q: I'm not having any luck training my triceps. I'm sure it's because I've been doing the same old routine forever. Got a good tricep routine that I can try out today?

A: There are two important variables that will lead to large increases in triceps mass:

With those two points in mind, here's a great triceps mass building routine:

In my opinion, this is the king of triceps builders. Yet, like the ever demanding squats and chins, it rarely makes the Men's Fitness pulley artist-type of routines.

To start the exercise, hold the bars and boost yourself up until you've stabilized yourself at arm's length over the handles. Then, lower your body as far as possible in between the bars. In fact, lower your body until your biceps make contact with your forearms–your triceps must get fully stretched. Once you reach the bottom position, press yourself back up by extending the elbows. Try to stay as upright as possible throughout the range of motion. If you lean too far forward, it will increase the recruitment of the pectoralis muscle.

If you can't lower yourself under control until the biceps make contact with the forearms, go back to collecting stamps, or perform decline close-grip bench presses until your arm strength is sufficient. Using an incomplete range in the triceps dips is a complete waste of time. And please do not go for the El Geeko version where you put your feet on a bench in front of you and your hands behind you. This exercise, along with Smith machine pressing exercises, is one of the major causes of shoulder impingement syndromes in the bodybuilding community.

At first, your bodyweight will probably provide enough resistance. As you get stronger, you can progressively increase the resistance by holding a dumbbell between your legs or hooking a plate or dumbbell to the specialized chin/dip belt. There are a lot of chin/dip belts on the market, but I prefer the ones that are standard leather lifting belts with hooks sewed into the belt.

If you have access to the better V-shaped dipping bar, use as narrow a grip as possible without, of course, compromising shoulder integrity. And please, do not cheat yourself by doing chopped reps where you don't go all the way down and you only come up three quarters of the way. By the same token, your elbows should only come to 98% of lockout to maintain maximal tension on the triceps.

Lie on an incline bench and hold two dumbbells at arm's length. Lower the dumbbells while keeping the elbows themselves stationary. Make sure that the triceps are fully stretched in the bottom position (the forearms should be in contact with the biceps at that point in the range of motion). Use a semi-supinated grip.

Use a revolving-type handle attached to a low pulley. Place a flat bench perpendicular to the cable station. Lie on the bench with your head close to the machine. Grasp the bar and extend it overhead. Bring the bar to the forehead on the eccentric descent and extend the elbows until they are at 98% of lockout. Be sure to keep your wrists in a neutral position to prevent any future elbow problems.

I've seen many individuals gain as much as a half-inch on their triceps in 30 days using this workout every five days or so.

Q: I see women doing lunges all the time, but I rarely see men doing them. What's your take on lunges? Are they strictly to develop the ass, or do they work the quads and hamstrings too?

A: You rarely see men do these exercises because of the standard bodybuilding bullshit that lunges are designed to "tone your butt." This falls into the same category of bullshit as the belief that leg extensions will cut up your legs.

Nothing can be further from the truth, though. I have seen many sprinters, jumpers, and bobsledders add inches to their already muscular legs by supplementing their squatting programs with lunges or split squats. By the way, the difference between a split squat and a lunge is that during the concentric portion of a lunge, you explode back to an upright position. With the split squat, you use a stationary stance where you go up and down on the forward leg.

Here is how to perform split squats properly:

Q: Wide-grip pull-ups are one of my favorite back exercises, but I've sort of stalled on them. I know you say trainees should be able to do at least 12 reps using bodyweight, but I haven't been able to get beyond eight. Any suggestions?

A: Here are three tips that will help you break through your wide-grip pull-up plateau:

Q: I have read some of your articles where you talk about "time under tension" and recommend sometimes doing sets where you take one or two seconds to raise the weight while taking anywhere from three to eight seconds to lower it. Is there any point in doing extreme time-under-tension reps? For example, I tried doing some sets of dips where it took me 15 seconds to raise my body and another 15 seconds to lower it. It hurt like hell. Did I discover something interesting, or am I just doing a slow-motion jerk-off?

A: Don't rush to the patent office just yet. On the other hand, don't put yourself down. My colleague Ellington Darden suggested many moons ago to do chins or dips using a 30-second count for both the concentric and the eccentric portions of those lifts.

You can use extreme time-under-tension training as long as the total time under tension does not exceed 60 seconds–otherwise, the load would be too low to elicit strength and muscle mass gains.

Do this simple test on your shoulders, apply the easy fixes, and watch as your bench, pull-ups, and press explode.
It Hurts Fix It, Mobility, Shoulders, Training
Brad Kaczmarski October 31 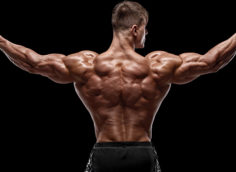 You've never seen this one before. Here's how to do it for a solid back and core.
Training
Gareth Sapstead June 16