Many trainees don't pay much attention to their lower back, except for when they happen to injure it deadlifting or moving a sofa on the weekend and they're forced to shuffle in Monday morning like the office Quasimodo.

But according to Coach Rip, your efficiency in every major lift is determined by the development of your lower back musculature – and the degree of control you have over it.

Your lower back may be doing absolutely nothing that you tell it to do, but learning how to control the muscles that set the curve of your lumbar spine could be the most important thing you learn this year.

I can't think of a more important piece of your body to have under control, as more than any other piece of the support structure, the lower back muscles directly determine your lifting efficiency.

We teach a lot of people to do the basic barbell exercises in our weekend seminars. We've spent the last four years showing thousands of people from every demographic how to squat, bench press, deadlift, overhead press, and power clean. All of these movements demand the use of an extended – or "arched" lower back – for efficiency of force transfer and production, along with safety.

That's right, I said safety. I'll admit to being guilty of having said, "Safety is for pussies," which some have taken as simple barbell-bravado. On the contrary, this is my particular way of saying that safety is a byproduct of efficiency, which you're expected to use anyway.

This arched low-back position is key to the effective use of the spine as the transmission of power produced in the hips and legs and applied at the shoulders, upper back, and hands, but in every group we teach, there are always at least a couple of people that can't either produce or maintain a lumbar extension.

In other words, when I ask them to "arch your lower back," or do an "anterior pelvic tilt," or to "stick out your butt," or to "make your tailbone touch your mid-back," or any number of other artful commands designed to stimulate the attendee to produce the desired low-back position, a number of people just can't do it.

The Ladies Get It 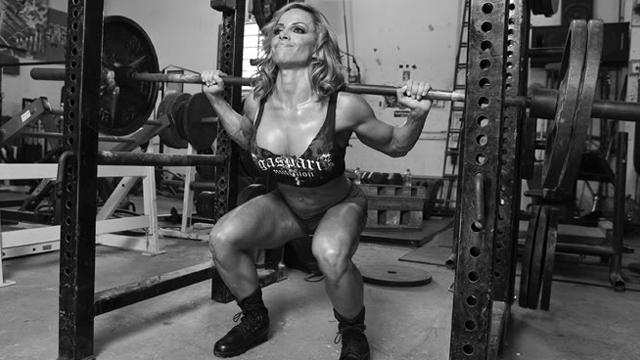 Interestingly, all the women can do it perfectly. I don't even ask to see them demonstrate this position – not because I'm leery of an inappropriate-behavior accusation (although this has happened, funny story, I'll tell you sometime). I don't ask because I've never met a female who couldn't immediately, and with pride, produce a voluntary lumbar extension.

It's a normal posture for any woman not swaddled in a burqa, a display position learned when they're young. The biggest problem with many women is an exaggeration of the arch into overextension, which is probably a worse position than flexion under load.

So I just save time and only check the guys. Many tall, skinny kids (maybe most of them) can't even bend over without rounding the low back into complete flexion, as if reluctant to bend the knees but quite happy to round the spine.

Many of these kids grow up to be relatively normal-looking adult males without ever learning to use the low back correctly. There are always a couple that have no idea of this position, and once they're shown how to do it, will tell me that this is the first time they've ever voluntarily assumed this position.

It's been well documented why the low back needs to be in the normal lordotic – the extended, or "arched" – position to bear a load. The thing you need to know is why so many people aren't able to voluntarily assume this position and whether you might be one of them.

It's also, of course, important to know how to fix it if you are.

No Low Back Awareness

The reason that many lifters can't arch their low back and hold it there in a squat or deadlift is because they actually don't know what position their back is in. Their kinesthetic sense for the position of their spine is undeveloped, and they may think it's arched when it's really in flexion.

An awareness of back position is necessary for the control of that position. Until you can identify lumbar extension – what it feels like to have your lower back in a position where the erector muscles are in contraction – you won't be able to assume this position when you want to, or when you have to, like in a squat or at the start of a deadlift.

What is more important for lifting heavy weights is that unless you can produce a voluntary concentric contraction of the lumbar muscles to set your lumbar spine into hard extension, you won't be able to reliably control those muscles isometrically under a load.

If you can't arch your back when you want to while standing up without any weight on your back, how in the hell will you be able to control it when controlling it gets hard? 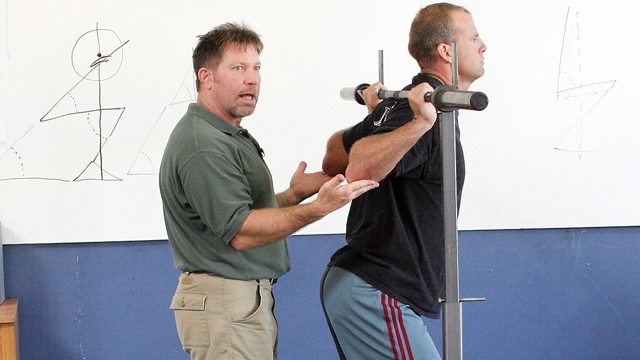 Here's what typically happens: After I identify the guys who have a "quiet" lower back, I'll stand beside the worst one and place my thumb and fingers on the muscle bellies of his erectors at the level of about T8, and then trace the muscles down to the sacrum. This tactile cue is sometimes sufficient to trigger a contraction of the lower back muscles.

I'll say, "Arch this part of your back," then watch carefully to see what he moves. Most guys that don't get it right will lift the chest instead of arching the low back, or lean forward by slightly flexing the hips without changing the position of the spinal components.

Take note, the problem isn't that the muscles won't contract – it's that the lifter's never tried to make them contract before now, and he doesn't know how.

There's no connection between his brain and his neuromuscular system that involves these muscles. It's like asking me to play Amaj7 on my guitar (I never learned that chord); I'd have to think very hard about where to place my fingers, watch them with my eyes, and practice doing it several hundred times before a "motor pathway" was established that allowed me to play the chord in a useful, non-nauseating way.

Fortunately, the motor pathway to the lower back is much easier to establish because the motor units involved aren't as small – it doesn't take fine motor control to arch your lower back, so there are fewer nervous components involved in the movement.

It can be taught quickly, provided you can figure out how to get the guy to do it right just a few times so he can feel what he's supposed to do.

Tricks of the Trade

When this doesn't work, I've got several tricks I use to produce the position. The cues continue. "Lift your sacrum (I then touch it) up here to your mid-back (I touch his spine at T8). Make these two spots come together."

I could also turn around and have him lay the palm of his hand flat across my low back and produce the contraction as an example of what I want him to do. This works surprisingly well; some people can learn from watching the lower back of another lifter go into contraction and then copying the motion. Feeling it with the hand reinforces what their eyes see.

For those wordy, non-visual types, I might also explain the concept of the pelvic tilt. The pelvis is hooked up pretty thoroughly to your low back, and if you tilt the top of your pelvis forward, the bottom tilts backwards and the low back goes into extension. With a combination of demonstration and manual assistance I can produce the anterior pelvic tilt that arches the low back. A helpful cue for males is, "I want you to drop your dick down between your knees."

Grandiosity being common, this usually works better than any other cue.

If all these things fail, Plan B goes hot. I lay the guy down on the floor on his belly with his hands behind the head. I have him relax his chest into the floor and then I say, "Lift your chest and elbows up off the floor." This produces an extension in the thoracic area of the back, well above where I want it. I have him do this a couple of times, and then explain that this is lifting the chest.

Next I say, "Lift your knees and feet clear of the floor. Keep your knees straight." I have him hold this contraction for a few seconds, and then I touch the lumbar muscles, which are now in contraction.

"Do you feel the difference between this and raising your chest up?" He can now feel my hand on the muscles, like before when he was standing, unable to make them contract, but now they're tight – he has produced a voluntary contraction in the muscles that before were unresponsive to the command.

I let him relax a second, and then he does a set of 10 reps, holding each arch for a couple of seconds. At the end of 10 reps the previously lazy muscle bellies have accumulated some lactate, and the burn is an identifiable product of the contraction.

Then I stand the guy up and tell him to make the same motion he did on the floor. The muscles are still burning, and he remembers exactly what action made this happen. A combination of these cues and this position on the floor works every time.

Back to the Point

Why is this the most important thing you will ever learn about lifting weights?

A lifter who can't control his lumbar spine isn't as good a lifter as he can be. The rigidity of the spine is so important a component of the force-transfer mechanism between the floor and the bar that your pulling and squatting efficiency is severely compromised until you learn this.

Many people get away without knowing about this control deficiency for years because their abs and related muscles are strong enough to compensate for this missing component. This is why some guys just lean forward into hip flexion when I try to cue the low back – ab contraction has been the default mechanism for spinal stability because that's all that was available.

It also explains how I've been able to discover experienced lifters that lacked the ability to concentrically control the lumbar muscles. These guys immediately improved their pulling and squatting upon being shown how to produce the contraction. And when I say immediately, I mean the next set.

If you're coaching a lifter, don't forget to check the low back for tightness since it has such a bearing on performance. And, just for the hell of it, ask your lifter to demonstrate his low back arch for you. You may be surprised.

So now that you're through reading this amazing article, stand up and see if you're one of the guys whose lifting can immediately benefit from learning how to control your low back muscles.

If you are, you're welcome.

When your glutes won't activate during lower body exercises, they start to get soft and shapeless. Here's a simple way to keep them round and hard.
Tips, Training
TC Luoma July 24 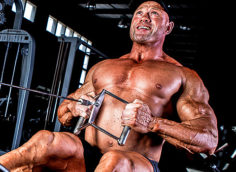