Neither are worth doing.

The main issue with the pistol squat? It requires the non-working leg to remain parallel to the floor, which, by the way, provides no added benefit. As a result, the shortened position of the hip flexors and their subsequent overuse can cause significant lower-back stress.

Getting into the bottom position of a pistol squat also requires severe lumbar flexion. The result can be a whirlwind of lower-back issues, especially for people with long legs. Tack on poor execution (which is all but inevitable) and things can get ugly pretty quickly. Here's why:

1. It's virtually impossible to maintain a neutral spine.

If someone dumps into excessive lumbar flexion at the bottom of a squat, it's an immediate red flag. So why aren't the same standards applicable to the pistol squat?

Watch someone drop into a full pistol squat and chances are their entire spine is rounded forward. Sure, their spine won't spontaneously combust, but repetitive flexion (with added load, nonetheless) can be problematic over time. Spinal neutrality is crucial, regardless of the movement.

Coach Mike Boyle's said, "Doing a pistol squat is a nice party trick, but it's not great training." I agree.

Entertainment aside, the pistol squat serves little-to-no purpose for building functional and transferrable strength, let alone muscle. There's hardly any eccentric or negative, minimal muscle activation, and reduced force production due to the extreme range of motion. And, call me crazy, but I've yet to see anyone dump into a pistol squat in sport or daily life.

The pistol squat almost always involves collapsing at the bottom of the movement, which makes it tough to maintain muscular tension and absorb force properly.

This can wreak havoc on the joints – namely, the knees and hips – since most individuals will wind up hanging out on their tendons, ligaments, and connective tissue at the bottom. Plus, pistols are almost always performed with a rapid nosedive into an already vulnerable position, which (literally) adds insult to injury.

In a fairytale world, everyone would be performing a pristine pistol squat in a way that would make every CrossFit box owner proud. In the real world, though, 99.99% of people will never be able to perform a pistol squat without dumping into flexion or collapsing like blocks in a game of Jenga.

Even then, doing a "good" pistol squat involve an unnaturally large ROM, which alters the natural way in which the lower half is supposed to function due to the structurally and biomechanically disadvantageous position.

The commonly cited benefit of the pistol squat is that it builds authentic single-leg strength due to the absence of the non-working leg. True? For sure. The best way to achieve that? Far from it.

A far better alternative is the one-leg squat which, to be clear, is not the same as a pistol.

What separates the one-leg squat is that the non-working leg isn't required to stick straight out. Instead, it can remain perpendicular to the floor when done standing on a box, or hover around 45-degrees when done to a box or bench. Either way, it's a far cry away from the 90-degrees required during a pistol.

It's a subtle tweak, sure, but it makes a world of a difference. There's significantly less stress being placed on the hip flexors and low back, it's easier to remain upright without losing spinal integrity, and the ability to maintain tension and stay tight is far more do-able.

As a result, one-leg squats minimize all of the pistol's inherent risks while maximizing the benefits of pure single-leg work.

Here's why the one-leg squat is so valuable

Plus, it's easier to manipulate the depth by using different box heights, which isn't always the case with other exercises.

If you don't have weight vests or chains, there are a number of other ways to increase difficulty. 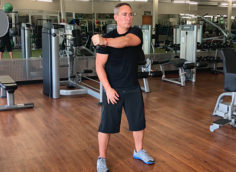 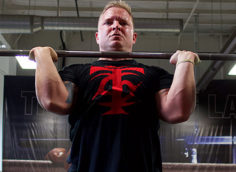 She did 15 minutes on the elliptical trainer. Then she did arm curls, leg extensions, straight leg raises, and side bends-lots of side bends. In short, she was doing everything wrong.
Training
Chad Waterbury February 12
Gary Homann isn't your garden variety weightlifter. Sure, he's 180 pounds at 6% body fat. Sure, he had the best 500 meter indoor rowing time in the world last year in his class and he's been an ACSM certified health and fitness instructor for the past nine years. But Gary's also got a Master's degree in applied health psychology and is currently working on finishing his Ph.D. in psychology.
Training
John Berardi, PhD December 23