Bill March set several world records in weightlifting during the 1960’s. He was probably also the first American to use Dianabol.

March didn’t attribute his accomplishments to steroids, but to a revolutionary new weight training system he’d been using called isometrics. Isometrics was the brainchild of York Barbell Club owner Bob Hoffman and USA weight lifting team physician Dr. John Ziegler. As news of March’s success with isometrics hit the muscle media, it captured the attention of athletes worldwide and made Hoffman in particular a very rich man.

However, things began to crumble when word came out that Ziegler was also the father of Dianabol and that March had been a user. Almost overnight, March, Hoffman, and Ziegler were soundly discredited, and isometrics declared a gimmicky and ineffective training method for natural athletes. Was that a fair assessment?

However, overcoming isometrics in particular can be very effective for busting through sticking points – the spot in the concentric range of motion where the resistance can’t be overcome by the strength of the muscles.

The fact is, you can produce 15% more force isometrically than you can concentrically. And producing greater force during the weakest part of your lifts is the key to pushing past sticking points and smashing plateaus.

With sticking points, the best defense is a good offense! By pushing as forcefully as possible against an immovable object, you’re not only overloading the weak region but also programming your central nervous system to be aggressive, all the while producing a localized training effect within 15 degrees of the targeted joint angle (i.e., the sticky region).

The real magic happens when you combine isometrics with dynamic or explosive work. Begin by setting the pins in a power rack to the region or range of motion you want to target. Then bench press the unloaded barbell into the pins and use maximal force against the pins for 5-6 seconds. Try to push the power rack through the ceiling!

“When you perform a 3-5 RM set followed by a light explosive set… to your nervous system it’s like lifting a half can of water when you think it’s full.” 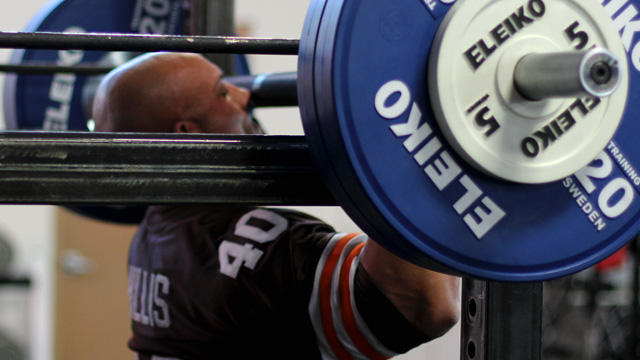 When performed incorrectly, isometrics can be detrimental to your rate of force development and can negatively affect your stretch-shortening cycle. Furthermore, even properly performed isometrics can lead to burnout and injury when used too often or for too long.

As such, I like isometrics in blocks of three weeks, with no more than two consecutive blocks. Here’s a sample program that shows how you might use isometric/CAT contrast training:

And here he is performing CAT benches 3 minutes later:

If you’re fighting a pesky sticking point, then give this bare-bone basic method a try. You don’t need access to any Ziegler goodies, just a power rack, a barbell, and a desire to get better.