Disclaimer: What you're about to read is some very technical, very geeky stuff, but don't panic if you don't have your kinesiology degree just yet. In the future articles in this series, Eric and Mike will break it all down for you and show you how to fix your posture and improve your physique. For now, take off that poseur trucker hat and put on your thinking cap!

Do the Evolution, Baby

Evolution is defined as "a process in which something passes by degrees to a more advanced or mature stage." Think back to prehistoric times and try to envision your ancestors. You probably have an image conjured up of a Neanderthal wearing a loincloth, grunting at females, killing his own food, and hunching over a fire to stay warm. His DNA endured century after century, guaranteeing that you're equally hardcore, right?

Then again, you wear boxer briefs, utter cheesy pickup lines at every woman you see, hunt for your food at the local Stop 'N Shop, and hunch over a computer all day. In other words, the only trait you share with this prehistoric badass is your pathetic S-shaped posture: rounded shoulders, forward head posture, exaggerated kyphosis, anterior pelvic tilt, excessive lordosis, internally rotated femurs, and externally rotated, flat feet.

Well, it's time to once and for all dissociate yourself from the Neanderthals by correcting these structural problems. We're here to help you do just that. This four-part series will outline the most common postural distortions and provide a comprehensive program to correct them.

First, let's talk about muscular contraction. You've heard of the sliding filament theory, right? No? You're not a total kinesiology geek like us, huh? Well, here's a brief synopsis:

Actin and myosin filaments are found within the sarcomere (a contractile unit of skeletal muscle). The myosin cross bridges attach to the actin filaments, pulling them inward and leading to an overall shortening of the muscle fiber. When a bunch of fibers do this at once, we get a concentric muscle action (contraction or shortening).

With the sliding filament theory in mind, you can imagine that changes in the length of a muscle fiber can affect the ability of the muscle to contract optimally. For example, when a sarcomere is too short, it can't generate peak force because of the preexisting overlap of actin filaments. This overlap takes up valuable space that could otherwise be used for the myosin cross bridges to attach. Conversely, when the sarcomere is excessively lengthened, the actin filaments are too spread out for all of the myosin cross bridges to reach them for attachment.

So, we know that a muscle fiber (and, in turn, the entire muscle) is strongest when the sarcomeres are at their ideal resting length (usually resting position or slightly more lengthened). In all other positions, the sarcomere is outside of this ideal length zone and can't generate maximal force. Just consider how your strength varies in certain portions of the barbell curl and you'll understand what we mean.

The length-tension relationship isn't only important at the cellular level; training – or lack thereof – can alter a muscle's normal resting length. Simply put, the more you train a muscle, the shorter it wants to get.

The problem herein lies when the agonists become chronically shortened due to poor training and/or lifestyle behaviors. Summarily, we get shortened (hypertonic or overactive) muscles and lengthened (hypotonic or inhibited) muscles opposing each another. Now, toss the length-tension considerations into the mix; do you think muscles (and their individual fibers) that are always outside of the optimal length zone will be able to generate maximal force? Is the Pope Hindu?

When discussing length and tension, you must also be aware that they're not one and the same. A muscle can have excellent length but still be excessively tight and vice versa (although it's not as common). It's generally accepted that with length, more is better unless you have the flexibility of a circus sideshow freak. Muscle length is usually improved via stretching (static, dynamic, PNF, etc.)

On the flip side, tension is more of a bell-shaped curve. On one hand, excessive tension is problematic as stated above, but excessive laxity isn't beneficial either. Tension is a true tight rope and something that should be evaluated frequently. Tension is best improved using modalities like massage, heat, muscle stim, or myofascial release.

It's time to apply the aforementioned principles to your caveman posture. Essentially, with the classic S-shaped posture, you have overactive and inhibited muscles from head to toe. The origin of such distortion is unique to each case. In some cases, these problems result from developmental or congenital structural abnormalities such as rearfoot or forefoot varus, Scheuermann's disease, or spondylolisthesis (just to name a few).

However, these cases aren't the norms when it comes to screwy posture; rather, the Neanderthal look is usually a function of poor postural habits and improperly balanced training focus at multiple joints. Therefore, in weight-training populations without actual structural irregularities (read: you!), the most beneficial corrective programs will work to resolve the problem at each affected joint. Beginning with the core (a common source of postural problems), here's a depiction of how several joints interact in this common postural distortion:

Now, this only refers to static posture. Just imagine what happens when someone with these postural afflictions actually tries to move around! Several injuries and/or conditions may result from each postural flaw:

Numerous muscles cross these joints and all of the actions of each muscle will be affected by alterations to optimal resting length. To give you an idea of how dramatic an effect these subtle distortions can have on every exercise you perform, consider the following muscles that may be affected and their functions:

Note: The temporalis and masseter (facial muscles) also become overactive with forward head posture, as they must constantly contract in order to keep the mouth closed from this position (tension in the hyoid muscles of the neck forces the mandible posteriorly and inferiorly).

And you thought poor posture wouldn't affect your training! In Part 2, we'll highlight several postural assessments and functional tests you can perform to give yourself a better idea of your structural flaws.

In the meantime, your homework assignment for the next week is to have someone take full body (head to toe) pictures of your normal standing posture from both sides and the front and back (preferably in just your underwear).

Don't chicken out! You absolutely have to take pictures of yourself to get an idea of how you stand (pun intended). You can also do this in front of a mirror, but it's usually less effective because you'll want to fix your posture or subconsciously try to improve it. Moreover, it's damn hard to take photos of your own back! Anyway, be sure to get those photos taken so that we can hit the ground running next week!

Hamstrings are the weak link for most lifters. Don't be one of them. Here's how to hammer your hams to increase strength, power, speed, and explosiveness.
Bodybuilding, Powerlifting & Strength, Training
Justin Fallhowe July 22 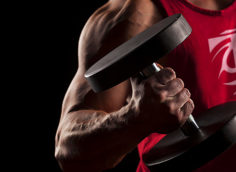 One to 5 reps for strength, 8-12 for muscle, and 15 or more for muscular endurance, right? Not so fast. New info here.
Training
TC Luoma March 15 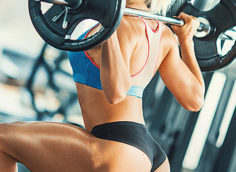 In a new study, women trained with light or heavy weights. The actual weight didn't matter much, but something else sure did.
For Women, Tips, Training
TC Luoma July 8

These three exercises can wreck your knees. Don't worry, you can modify the movements or just replace them with something better. Here's how.
Bodybuilding, It Hurts Fix It, Legs, Sprinting, Training
Dr John Rusin December 17