In strength and bodybuilding circles, the bench press is considered the king of upper body exercises.

Normal folks exchange pleasantries like “How are ya?” or “How’s the wife?” or “How’s your mom’s bursitis?” But in the commercial gym, “how much do ya bench?” is the most popular conversation starter.

It’s not surprising that, given this level of esteem, virtually every fitness center has a bench press area surrounded by beefed up dudes pumping their pecs every Monday.

In other words, for a movement to deserve the label “the ultimate upper body exercise” shouldn’t it have to work the entire upper body? 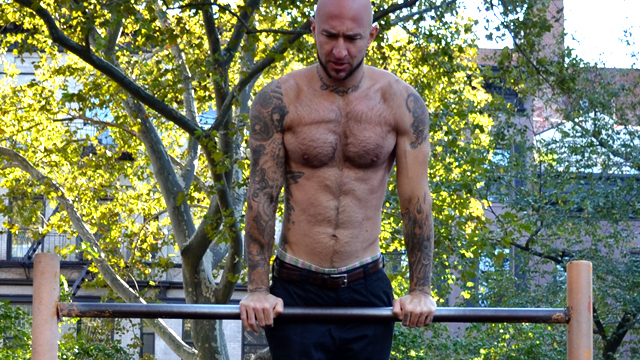 The muscle-up is a rare beast – an upper-body exercise that requires both pulling and pushing power and phenomenal core strength to boot.

Those unfamiliar with the move say it’s just a pull-up combined with a dip, but a muscle-up is much more than that. It’s an unparalleled assault to the upper body, and you have to be strong just to do one.

To practice this exercise, you’ll need a pull-up bar (or gymnastics rings) with plenty of overhead clearance. That’s it – no weights or fancy gym equipment required.

Ironically, many high-tech gyms today have vibrating platforms to simulate working out in an earthquake and treadmills equipped with flat screen TVs, but lack a simple straight bar with which to do muscle-ups. Your best bet might be to go to a local park.

To perform a muscle-up, rather than simply trying to pull your chin past the bar, focus on pulling (and then pushing) your entire upper body up and over.

If you’ve never done this move before, get ready for a humbling experience. Even if you can do pull-ups and dips like a trooper, you’ll likely need some practice to execute just one proper muscle-up.

There’s no set rule for how many reps of pull-ups are needed as a prerequisite; some lifters who can only manage six or seven pull-ups can perform a nice muscle-up, while others can bang out twenty dead hang pull-ups like machines and still continually fail at getting through the sticking point. The muscle-up is a unique challenge and must be treated as such.

It’s helpful to start off with a modified muscle-up. Set up a bar about chest height and use your legs to jump into the muscle-up. (If you can’t find a low bar, stand on a step or a bench under a high bar.)

This will help you get a feel for the crucial transition from being under the bar to getting on top of the bar, but without having to overcome your full bodyweight.

With practice, you’ll learn to rely less on your legs and do most of the work with your upper body. You’ll almost be ready to attempt the real deal.

The next step is to practice doing pull-ups with an exaggerated range of motion. Instead of stopping when the bar is below your chin, pull until the bar is well past your chest. Get as far over the bar as you can!

It can be helpful to use a false grip when performing a muscle-up. This entails bending the wrists up over the bar so that your palms are facing the ground as you begin the pulling phase.

For some, the false grip can make the transition from pulling to pushing simpler as you don’t need to worry about rolling the hand over the bar. If you’re learning the muscle-up on rings the false grip becomes a necessity – your hand won’t be able to roll as easily as it can on a bar. 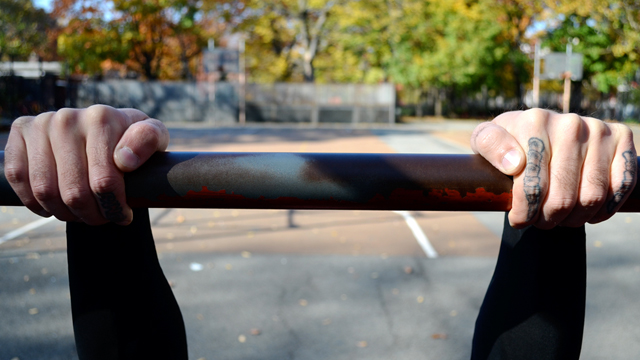 Since muscle-ups require considerable upper-body strength and help build power, it’s wise to practice them explosively, especially when starting out. You can eventually work up to performing the exercise slow and controlled to reap additional benefits. Once you reach the point where you can perform 10 consecutive slow muscle-ups, you’ll be at an elite level of pound-for-pound strength.

Here’s a video tutorial to help you learn the muscle up:

I recommend practicing muscle-ups near the beginning of the training session as they require significant energy and coordination, especially when learning the movement.

For those using a split routine, muscle-ups should be placed at the beginning of an upper body workout. Also, since you won’t be using additional weights, you can train them more frequently than you might with other exercises. I suggest starting at three times a week to effectively learn the movement pattern.

Most importantly, be patient. It may take a while before you get your first one. The longer you work at it, the more fulfilling it will be when it finally happens!

Once you’ve got the hang of muscle-ups, you can play around with ways to make them even harder. Just like pull-ups, muscle-ups can be made more challenging by using a close grip or a wide grip. You might even try working up to a clapping muscle-up, or the holy grail of bodyweight strength: the one arm muscle-up.

Just don’t get cocky and expect to be looking for ways to make muscle-ups harder right away. Getting just one good, clean rep may be a challenge for many!

Here are some popular variations of the muscle-up.

Get Your Muscle Up!

I’ve yet to meet a lifter who could successfully perform a muscle-up who didn’t try to incorporate them consistently into his or her routine. I’ve even known lifters that put down the weights altogether and simply used muscle-ups and other bodyweight exercises as their sole means of training – at least temporarily.

It’s not as crazy as it sounds, bench press addicts. I haven’t trained the bench press in almost five years, and thanks to muscle-ups, my upper body still looks and feels as strong as ever.

Best of all, I never have to wait in line for a bench press station – although I still get asked how much I bench, from time to time.