Truth be told, there isn’t much that I can legitimately claim to be an expert on, Star Wars notwithstanding. One rare exception is the deadlift. While not Andy Bolton-esque by any stretch, my 570-pound pull at a (then) bodyweight of 190 pounds allows me some bragging rights.

I consider the deadlift the ultimate showcase of overall strength. The entire body has to work in unison to accomplish the task at hand, and unlike the squat or bench press (where it’s much easier to cheat), there’s no debating the deadlift. Either the bar comes off the ground and you lock it out, or it doesn’t, and you have to hand in your man card.

While I’ve written extensively on the deadlift in the past, I still have more to say. Let’s see if the following random thoughts help you finally achieve deadlifting badassery.

Thoughts On the Setup

Without question, the setup makes or breaks the deadlift. If you’re lazy and just go through the motions, you’ll fail miserably, or worse, get hurt. Conversely, if you check your ego at the door and take the time to setup correctly, more often than not, you’ll be rewarded with a bigger lift.

On several occasions I’ve noted that one should retract (pull together) their shoulder blades when setting up for the pull. This stiffens the mid-back, engages the lats (which in turn provides more spinal stability), and activates the thoraco-lumbar fascia, which helps to better transfer force from the lower body to the upper body.

Based on feedback in the LiveSpill as well as various emails I’ve received, this whole “retraction” thing has confused more people than Chaz Bono in a men’s room.

As such, while I still feel that stiffening the upper back and activating the lats is integral for improving the deadlift, I’ve modified my approach. Slightly.

Trying to actively pinch the shoulder blades together while deadlifting just feels awkward. But when I use the phrase, “lock your shoulder blades into place and think about putting them in your back pocket,” it’s like magic, and people get it.

As a result, many of the benefits that I described above come into play. You shorten the lever arm length from the shoulder to the lumbar spine, and you also engage the lats to help protect the lumbar spine and the SI joint. But as a general observation, the pull just “feels” stronger.

Try it out on your next deadlifting day. I can almost guarantee you’ll notice an improvement. 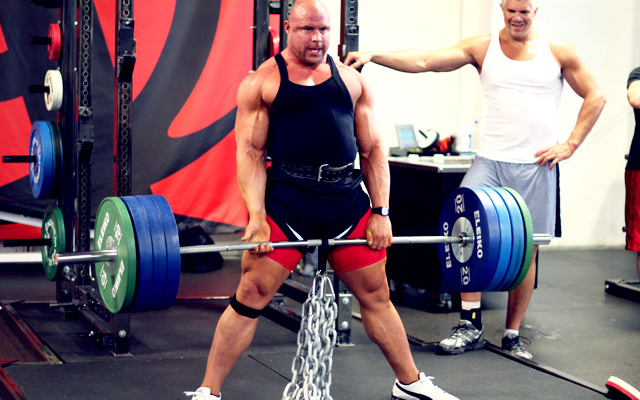 Possibly more important for a healthy, powerful, deadlift is packing the neck as opposed to hyperextending it, which is a big no-no for several reasons.

Don’t believe me? Try this little experiment. Stand tall against a wall and pack your neck (make a double chin) making sure to “wiggle” your head high into position.

Now, have someone shove you. You probably didn’t budge.

Alternatively, do the same thing but relax your neck, and maybe extend it a little (look up). Have someone nudge again. You should’ve noticed a big difference.

If you’re weaker when the neck is extending while standing, how is this any different than when doing a deadlift?

So to reiterate, when deadlifting, pack your neck. While this rule may not be quite as easy to follow during max effort attempts, I’d be remiss not to show that it IS possible.

To summarize, let’s break this down into list format:

If you miss at the bottom:

Any movement that emulates the starting position of the deadlift will likely transfer well to the deadlift. What’s more, and this is something that many trainees fail to recognize, the quads do play a significant role in the lift, especially in the starting position. Anderson half squats are an awesome movement that will help produce more leg drive off the floor, translating into a bigger, more efficient pull.

One piece of advice, however. Make sure that you share the load properly between the hip and knee joints. If you let the knees jut forward than it probably won’t transfer much to the deadlift. Remember to sit back.

If you miss at the top:

In fact, some studies state that there’s only a 15 to 20 degree carry over. Significant, yes, but definitely not ideal when you’re trying to improve a lift that starts from the ground.

That said, if you want to do rack pulls, do rack pulls. For some, it’s a psychological boost, and there ‘s something to be said about “feeling” what it’s like to locking out a heavier weight. Nonetheless, if you go this route, make sure you replicate the same kinematics as the top portion of your deadlift, meaning that the rack pull will almost look like a Romanian deadlift, not a partial squat.

In closing, here are some other random bits of awesomeness to kick up your deadlift.

This works really well with clients when trying to clean up their technique. There’s no law against pausing on the floor between each rep to “gather” yourself, get your air, re-establish a good back position, activate the lats, and perform a crisp rep.

Slow down. Gather yourself between each rep, and do it right!

For most, using the 5×5 approach to take your deadlift from the 200+ lb range to the 300+ lb range will work brilliantly. It’s progressive overload at it’s finest, and it works. However, if you’re attempting to enter “big boy” status and pull in the 400+ or even 500+ range, 5×5 ain’t gonna cut it. Sorry.

I’d go so far as to say that you’d be hard pressed to ever get to the really big weights using the 5×5 protocol, and if you do, it will take forever!

On the other hand, if you’re already pulling in the 300+ lb range, I’d suggest adding in more pulls at or above 90% of your 1RM.

Getting stronger is really about making the CNS more efficient. Sadly, you’re not going to accomplish this by performing 5×5 till you’re blue in the face. Conversely, it’s well established that using loads at or slightly above 90% of one’s 1RM affects the following:

So the only question left to answer is, what would a typical training session look like?

Lastly, if anyone comes up to you and says something like “I heard that deadlifts were bad for your back,” you have my permission to scissor kick them in the face.