Note: In case you missed it, here’s Part I.

You’d be hard-pressed to find a single weight-training movement that’s more “complete” than the deadlift. It’s not just an upper or lower back exercise, or a grip exercise, or a posterior chain exercise, or a core exercise; it’s an everything exercise. To that end, it’s a must-have in any lifter, athlete, or weekend warrior’s training arsenal.

Unfortunately, as with any compound lift, the deadlift can get pretty technical. If you’re going to be using big weights in hopes of getting big results, you need to make sure that you’re lifting with proper technique.

With that in mind, I’m first going to show the entire (conventional-style) movement in still frames, and then I’ll show it to you in video form at regular speed. Finally, I’ll come back and list the common errors that people make when deadlifting.

Step up to the barbell so that your shins actually touch it. 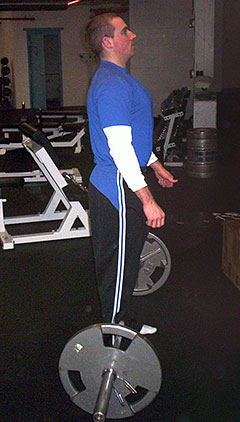 Keep your chest high while pushing your hips back. Imagine someone has a rope tied around your waist and is pulling you backward. 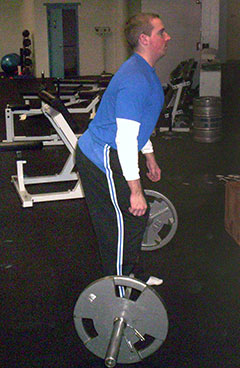 As your hips continue back, you’ll need to bend your knees a bit to get you down to the barbell. Grasp the barbell with a grip that puts your forearms right up against the sides of your thighs; the further out they are, the harder it’ll be for you to maintain neutral spine — and the further the bar will have to travel.

Keep the chest up and drop the hips down a bit. How far will depend on the build of the lifter, as I noted in Part 1. You should not look like you’re trying to squat the weight up. 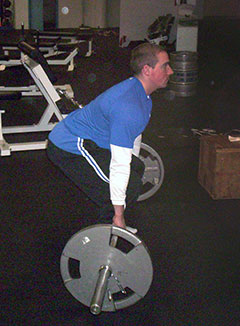 The elbows should be completely taut, with your eyes up and weight on your heels. Puff the chest up and tighten your triceps a bit to ensure that you’re in the “locked” position.

Take a big gasp of air into your stomach to help stabilize your spine, drive the heels into the floor, and push your hips forward as your knees extend. The hips and knees should extend simultaneously, and the shoulders and hips should rise together. 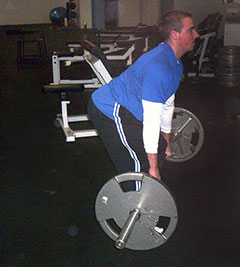 Note: Some lifters prefer to get their gasp of air before they descend to the bar.

As you reach lockout, imagine pinching something between your buttcheeks at the top to lock the weight out. This glute activation helps to prevent you from leaning back to finish the movement (lumbar hyperextension) and stopping short (can lead to hamstring dominance and a host of problems). At lockout, your scapulae are back and down (not shrugged up) and you’re standing tall. 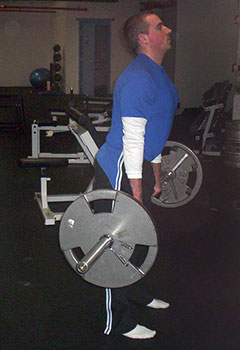 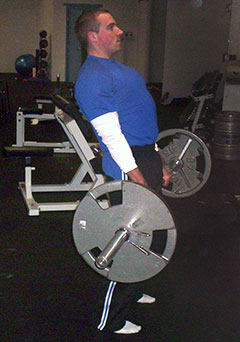 Now, a good lockout (glutes tight and shoulders back; standing tall, but not shrugged up): 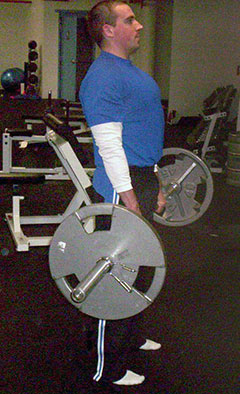 Initiate the eccentric (lowering) portion of the lift by pushing the butt back to unlock the hips without losing neutral spine. Just imagine putting a stretch on your hamstrings without rounding the back. 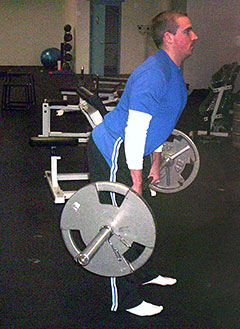 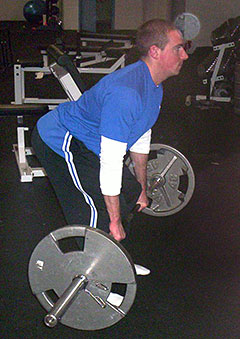 Many individuals will lack the flexibility to pull from the floor initially, so don’t force this exercise if you can’t pull it without looking like a scared cat! For these individuals, substitute the rack pull (partial deadlift). The bar can be elevated on pins in a power rack, or aerobic steps, or plates on the floor. Gradually move the bar down to the floor as your mobility improves. 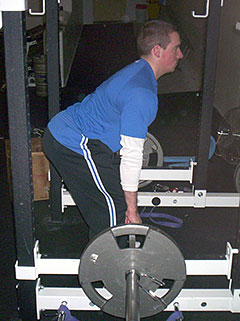 I’m going to put this in big, bold, capital letters:

THESE VIDEOS ARE INTENTIONALLY BAD!

I have nightmares of people skimming through this article and reposting them all over the internet. So, again, I certainly don’t let my athletes and clients lift like this!

Okay, let’s get to the troubleshooting.

This is the guy who sets up too low and far away from the bar on his pull. He has too much dorsiflexion going on, so the knees are actually in front of the bar as he initiates the pull. As the bar comes up, it catches on the shins and makes for a bloody deadlift and some good battle scars.

These individuals also have a tendency to pull with flexed elbows (from dropping too low and creating slack) and a rounded lower back (need to find range of motion wherever they can in order to get the bar around the knees).

Conveniently, as I was writing this article, a new athlete showed up and displayed this form, so I scored a video:

The solution is to get the feet up closer to the bar and bring the hips up a bit higher without losing neutral spine.

Deadlifts should be too heavy to curl, yet you’ll still see people who allow their elbows to go on slack when they initiate a deadlift. This is a great way to rupture a biceps tendon and guarantee that you aren’t pulling as heavy as you ought to be.

It’s the weight-training equivalent of punching someone with a limp wrist. You can’t effectively transfer force from your lower body and core to the bar if your elbows are flexed.

Here’s a great video for a few reasons. One, it shows you that even tall guys can pull (Pieter Smeets, at 6′ 5″, pulled from the floor on his first visit to the facility). Two, he demonstrates the elbows-flexed deadlift on his first few reps, but cleans it up when I cue him to do so. The last few reps are much better.

By pulling the elbows taut at the beginning of the movement, the chest pops up and it’s smooth sailing.

I seriously tried to get a video of this, and I’ve actually trained myself to the point that I can’t make my lumbar spine round enough to do this article justice. Fortunately, there’s someone you might recognize who’s done a great job of demonstrating this flaw over the past year or so on the internet.

On the bright side, he’s enthusiastic, so he’ll probably get the back surgeons to get him in sooner.

Our lumbar discs actually handle compressive forces really well, just not when that compression is combined with flexion. If you’re going to have any kind of flexion, it should only occur on max attempts in powerlifting populations, and only at the thoracic spine.

Those with a tendency toward the scared cat style need to improve hip mobility, lower body strength, and core stability.

This problem is most common in females, as they tend to be very quad dominant and often tight in the hip flexors. The more quad recruitment and the greater the anterior pelvic tilt, the more likely an individual is to stop short on the deadlift.

The solution is very simple: hump the bar! Activating the glutes posteriorly tilts the pelvis to complete hip extension. Combined with scapular retraction, this yields an upright posture.

Closely related to the stopping short flaw is that of lumbar hyperextension at lockout. In these individuals, rather than stopping short, they just hyperextend the lumbar spine to compensate for the glutes not firing to complete hip extension. In the process, the knees may bend a bit and the end result is a backward lean.

Again, the secret is to hump the bar and stand completely upright.

While a shrug might be desirable in teaching Olympic lifting progressions, it’s not what we want with a regular deadlift.

The shoulders should be pulled back and held down at lockout. This ensures optimal stability of the shoulder girdle. Just think about the last time you watched the farmer’s walk or car deadlift at the World’s Strongest Man contest. Did these guys carry the weight with their shoulders shrugged up, or were they in that “locked down” position? 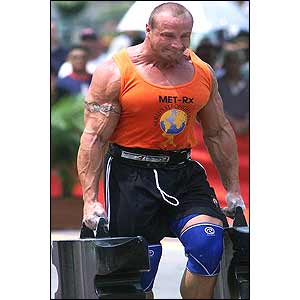 The answer is “B”

Some people are built such that they need to initiate the pull with their hips higher. On the other hand, there are those who just turn everything into stiff-leg deadlifts. Basically, what you see is that the hips shoot up faster than the shoulders and the bar gets too far out in front.

This can happen for many reasons — a history of knee problems, posterior chain weakness, not pushing through the heels — but it’s something that’s relatively easily remedied by just checking the ego at the door. Drop the weight a bit and focus on the hips and knees extending simultaneously with the shoulders and hips rising at the same rate.

Believe it or not, a lot of people have more problems with the lowering component of the deadlift than the lifting portion. The most common flaw we see is those who break the knees too early and try to stay completely upright for too long.

When the knees break, the bar gets further away from the ideal axis of rotation (hips). In order to create the range of motion needed to get the bar around the knees, the lifter has to round the lumbar spine and/or markedly protract the shoulder blades. In both cases, the knees can get shredded up pretty good.

The solution is simple: push the hips back and keep the spine neutral. Don’t break the knees until the bar has passed them. Then you can half squat, half deadlift the bar to the floor.

Sometimes we encounter people who have stiffness in their hips that doesn’t allow them to get the range of motion necessary to take the bar all the way down to the floor. Or, they’re simply too lazy to care about lowering the bar under control. Either way, they just round over to set the bar down — and usually pretty loudly.

Mobilize the hips, strengthen the upper back, and simply be patient, and this problem will resolve pretty quickly.

That wraps up our analysis of the conventional deadlift. Fortunately (or unfortunately, depending on how many of these flaws you found in your own pulling technique), we’ve got literally hundreds of variations of deadlifts we can apply in our programming. In Part III, we’ll cover several of them!