The following article is Part I of a two-part leg training article that's very different from anything you've ever done. How so? Well, for starters, some of the exercises don't even require you to use any weight beyond that of what you've got piled on top of your hip bones and dressed up in a Tommy Hilfiger shirt. Secondly, this workout has a nasty side effect. It hurts. Real bad.

Cast aside your skepticism and try the following workout this week. Part II will follow next week. Alternate between the two workouts for a period of three weeks or so. If it isn't everything Ian says it is, and if you don't think it's all that tough, keep doing things the old-fashioned way. Of course, if it is everything Ian says it is, you might want to skip it anyway, 'cuz you might be dead from the pain. Enjoy.

It's been said that the main reason many trainees avoid leg training is because it hurts too much. Maybe they're right. After all, leg training can be painful. Chances are, if you're going to "yawn" in the gym garbage bin after a workout, it's probably going to happen after squatting (for some strange reason, gym managers don't like it when you do this...one of them once asked me to leave his gym simply because I was quite noisily emptying the contents of my breakfast into his rubbish bin).

Do you know what it feels like to have your legs hurt so bad that you don't want to take another step, or have difficulty ascending stairs or getting on and off the can? Of course you do...or do you? Perhaps you've forgotten what it's like to have quads so sore that when someone brushes up against your leg accidentally, you swear that they had just stabbed you with a knife.

In case you've forgotten that feeling, or in case you want to experience it for the first time (silly you), you might want to try the following routine. It's the type of routine that you may read and think to yourself, "Easy," but you'll later find yourself wondering how such simple exercises could have caused so much pain. It is, however, a workout only for those who are more concerned about the training effect than the visual effect. You can't worry about how hard the routine looks to others. If that's of more concern to you than the effect of the workout, you're not ready.

This workout is only for those of us who are prepared to do something different for immediate size gains and subsequent strength gains.

But, hey, if you're satisfied with your leg development, you might want to pass this up.

The first two exercises are the leg flexion (curl) and leg extension. Provided that your gym hasn't overreacted to the "latest news" about the evils of open-chain kinetic exercises and so on, there will still be a leg flexion and extension machine in the gym. I don't prescribe these types of isolation exercises a lot (perhaps about 25% of total training time, in general), but I like these exercises for this type of routine.

I need you to do the flexion (curling) before the extension to counter any muscle imbalance in favor of the quads. Use one leg at a time on both. This is not only an opportunity to isolate the action of knee extension and flexion, but also to isolate the limbs. (I know, a potential criticism is the alleged non-specificity of knee extension/flexion. Who cares? You're simply using a pre-fatigue method.) If the gym isn't too crowded, do one set on the leg curl followed immediately by one set of the leg extension using the same leg. If the gym is busy, do both legs (individually) on the flexion, then both legs (again individually) on the extension. Start with the weakest leg first. If you don't know which one is the weak leg, you will by the end of the workout! (See the weak-side rule in the notes below.)

Use a load that causes you to fail between 12-15 reps. Do one warm-up set using normal speed, then one work set as described. In fact, this routine only asks that you do one set of all of the described exercises.

Stand on the edge of a low block (1/3 to 1/2 the height of normal bench height). Have the weak leg on the box and the strong leg off the edge of the box. With your hands on your hips, bend at the knee of the weak side, lowering down (two to three seconds) until the sole of your feet almost brushes the floor.

Keep the sole parallel to the ground. Pause for one second and return to full extension in about one to two seconds. At the tenth rep, pause at the bottom position for ten seconds. You must not rest the non-supporting leg on the ground at any stage during the set. Then continue reps until you get to 20. Repeat the ten-second pause.

Can you go on? If yes, remember that you have to finish what you start–this exercise must be done in multiples of ten, with a ten-second pause in the bottom position at the completion of every ten reps. If you get to 50 reps, look to raise the height of the block.

If possible, don't hold onto anything during the set – the challenge of having to balance yourself will add to the fatigue. However, you may wish to do this near a wall or squat stand, just in case. You don't need to do a warm-up set; go straight into the work set. And be careful when you get off the block at the end of the set.

Repeat with the strong leg.

Single-Leg Squats With Back Foot on Bench

Some know this as a Bulgarian squat...with a difference. Face away from a normal height bench and place your rear leg up on the bench. You can check your distance by ensuring that you keep a relatively vertical shin throughout the movement. Place your hands on your head and keep your chest and trunk vertical throughout.

If you can do more than ten reps, graduate to holding dumbbells in your hands (I don't expect this to be necessary, initially). Keep the knee aligned over the foot during the entire movement. You don't need to do a warm-up set; go straight into the work set. After you've exhausted the weak leg, repeat with the other leg.

You may have seen a recreational ski enthusiast perform this one, but don't get too confident. You might get a big surprise here. Place your feet shoulder-width apart, about two feet out from the wall, and lean your back against the wall. Bend your knees to a half-squat position. This is position one.

How long is the specified time? Start with somewhere between 10-20 seconds per position, adding five seconds per workout. The five positions should be done with no rest between them. That's one set (remember, just one set per workout). Was it too easy for you? Do it with one leg at a time.

This is another one for those gyms whose hack squat machines survived the purge. (If you don't have a hack squat, you can do a one-legged standing squat, holding the other leg out in front.) With the hack squat, hold the non-working leg out with the heel just off the ground at all times. Start with no weight on the machine other than that provided by the machine itself, and don't expect to be able to do full range movements right off the bat. Maybe start with a limited range, and look to progress in range from workout to workout, as well as making progress in your reps and weight. Try for 8-12 reps. If you struggle and find that you can't do full-range movements, work with a standard 302 speed. If it's easy, do 1-1/3s. Keep your knees in neutral alignment.

Using one leg at a time, stop three times during the eccentric (lowering) phase for three seconds each time. Look to vary the stopping angle. Explode up during the concentric (lifting) phase, but avoid full lockout on extension. Don't get carried away with load on day one – start with 50-100 pounds, doing 8-10 reps.

At last, the moment you've been waiting for – normalcy, an exercise you know! Your pleasure may be short-lived, though, as you face fatigue from near nonexistent loading. It takes a brave person to keep going – not only because of the physical pain, but also because of the emotional trauma of sweating and shaking under what will appear to be a minimal load to everyone in the gym. But remember, you're doing this for the training effect, not the visual effect!

Place the bar as high as is comfortable on the neck, take a narrower than shoulder-width stance, and allow only a slight external rotation of the feet. Don't let the knees wander, and go down as deep as your flexibility allows. If your trunk flexion exceeds 45 degrees, don't go any deeper. Take eight seconds to go down, no pause, and four seconds to come up. Do 6-8 reps.

If you can walk pain-free at the peak of delayed muscle soreness (about two days later), something's not right. This is one workout that should accelerate your muscle size and boost your strength immediately upon return to more conventional methods.

Notice a pinching sensation when you squat? Not good. Here are 5 ways to fix the problem.
It Hurts Fix It, Tips, Training
Dr Michael Mash January 22

Weak neck, weak body. Here's the best way to build that pencil-neck.
Bodybuilding, Powerlifting & Strength, Training, Weightlifting
Max Shank July 19
We've all been there. No matter how big and educated we think we are now, at one time or another we were small.
Training
Chris Shugart May 19 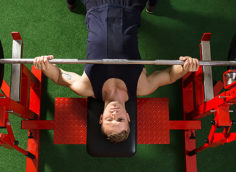