When lifters talk about specificity, they're usually talking about an exercise being specific to a competition lift or a movement in sport.

For instance, the bench press is considered to be specific for a lineman in football because it has a similar movement pattern to what a lineman does when he pushes against an opposing player. In terms of movement pattern, the two things are similar.

But the movement pattern isn't the only thing that matters when talking about specificity. As it turns out, it's not even the most important thing! Speed of movement is actually even more important.

The bench press and deadlift both usually happen pretty slowly, at least with heavy weights. But anything that happens on the football field needs to happen fast. And when training, how fast you move is even more important than HOW you move. As it turns out, strength built at low speeds has little correlation to the strength that can be displayed at high speeds.

Most people instinctively know that the ability to bench press a huge weight doesn't automatically transfer to the ability to throw a devastating punch, and this is one of the reasons why. A max bench press happens very slowly, and a punch happens extremely fast.

Researchers have shown that strength built at slow movement speeds just doesn't transfer well to fast or explosive movements. Strength built with fast moving exercises does transfer to slower lifts, but the opposite doesn't appear to be the case.

Exercises like the bench press and the deadlift do have a lot of value though, even to athletes. These "slow" exercises are the ones that produce the most tension in the muscle and therefore build the most muscle. So athletes need to include them along with training which takes place at a higher movement speeds.

Exercises which require a higher speed of movement are going to tell the coach a lot about how the athlete will perform outside the weight room. Many football coaches who attend my seminars are eager to share their stories about the kid that could squat or deadlift the world, but couldn't move at all on the field. Every coach has a story about a player who looked like Tarzan, but played like Jane.

On the other hand, most coaches recognize that any player who can power clean a big weight is probably going to be a terror on the field. The fact is, the power clean to bodyweight ratio is better at predicting vertical jump and 40 yard dash performance than any other method outside of actually jumping or running the 40.

But football coaches don't need to read some study in a scientific journal to figure this out. They can see with their own eyes that when the kid who has a big power clean hits someone he knocks them on their ass.

This is why the power clean is often referred to as the athlete's lift. Cleans build and display power. This is the kind of strength that applies to sports.

In the clean, the movement starts at the floor with the bar motionless, then the bar is steadily accelerated upward until somewhere between the knee and the hip where an all-out explosion occurs. The slow acceleration from the floor, along with the explosion at the end, together have to impart enough speed and momentum to the bar to raise it to the rack position on the shoulders.

The push press is like the upper-body power clean. I think I've called it the upper body squat previously but that was wrong. The squat can be performed slowly. In fact, when you have near limit weight on the bar, slowly is the only way it can be performed!

But the push press, like the power clean, HAS to be performed fast even with max weight. The only way to do a heavy weight is with as much acceleration of the bar as you can achieve.

In the push press, the movement starts by slightly bending the knees then exploding upward. The leg drive is the main force that drives the bar up immediately after it leaves the shoulders. Then as the bar rises, the arms take over and contribute more and more as the bar get closer and closer to lockout.

After the bar leaves the shoulders in the push press, the lift becomes almost identical to the press, and the arms are of course always pushing with all the upward force they can muster. But since the weights used in the push press are heavier than what the arms can move alone, all the arms can do is slow down the deceleration of the bar.

The goal is to provide enough force with the arms to keep the bar moving upward until it's locked out. With heavy push presses, the movement is fast and explosive right off the shoulders, but slows considerably as the bar nears lockout.

In both the push press and the power clean, great force must be applied to the bar while it's moving upward at a high rate of speed. In the power clean, the bar must be accelerated to a speed of about 2 meters per second.

In the push press, the bar will usually start right off the shoulders even faster than that, and the goal is to apply as much force as possible while the bar is already moving quickly.

So whether your sport is football, weightlifting, or CrossFit, remember that the bench press and deadlift will help you build strength and muscle, but the clean and push press will help you display that strength quickly!

Because both of these lifts are fast, explosive lifts, the reps per set are usually between 3 and 5. If you want or need to do more volume it makes more sense to do more sets and keep the reps the same.

My favorite push press workout is 3 submaximal sets of 5 early in the week (around 85% of 1 RM usually works) and one maximal set of 5 late in the week. One set of 5 in the push press can usually be done with around 90% of your single rep maximum. 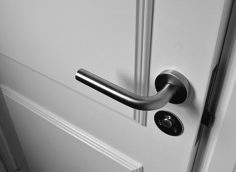 No access to a pull-up bar? No worries. Keep your strength and build your back using... a door. Yep, you read that right.
Training
Lori Brand May 18

In the deadlift, if you can break the bar off the floor but struggle mid-shin, the problem is likely weak quads. Here's one way to fix it.
Exercise Coaching, Tips
Christian Thibaudeau January 6