So what exactly is “heavy?”

Since I advocate the use of heavy Bulgarian split squats for building bigger and stronger legs, I get that question a lot.

I go back and forth about whether strength standards are even a good thing, but overall, they probably are. Lifting is and should be an individual pursuit of self-betterment where the ultimate goal is improving yourself, but it still helps to have some sort of barometer to see how you stack up against others to at least let you know you’re on the right track with your training.

I’ll answer the question three ways– an absolute number, relative strength, and strength relative to another bilateral lower body exercise. All three have their advantages and drawbacks.

Throwing out an absolute number is tricky because it’s inevitably somewhat arbitrary, and it definitely favors the bigger dudes.

I’ll say this, though – about a year and a half ago, I made a deal with my high school hockey boys (ages 14-18) that anyone who could do 200 pounds for 6 reps per leg (either with dumbbells or a barbell) would get a burrito from Chipotle on me. At the time, the strongest of the group was doing 185 pounds for 6 reps, and most were in the 130-140-pound range, so I thought my wallet was safe.

To date, I’ve had to buy seven burritos, and five have eclipsed 220 pounds for 6. Mind you, those numbers are coming from high school boys weighing 160-195 pounds, so strong on this exercise is probably a lot higher than you thought it was, especially for lifters who prioritize it and perform it regularly with sufficient intensity.

In terms of relative strength, this is also problematic because it favors smaller guys, but I’d say a reasonable goal would be bodyweight (meaning your bodyweight in additional loading) for six reps per leg. If that sounds way too high, bare in mind I was actually going to suggest a higher number, but since I don’t feel like nitpicking decimals, I’ll be conservative.

If I had to give a more precise number though, based on the ratios of my strongest guys, I’d say 1.25 times bodyweight of additional load for 5-6 reps would be considered very strong.

If that sounds like crazy talk, here’s a video of a 180-pound kid cranking out 235 pounds for 5 like it’s nothing:

The best strength standard for Bulgarian split squats might be looking at it relative to a bilateral exercise.

For one, doing it that way helps to level the genetic playing field. If you derive a number purely based on absolute strength or relative strength, the genetically gifted are obviously going to have a much easier time hitting those objectives.

That’s fine to a point because we’re trying to establish benchmarks, but if you make the standard relative to your other lifts, it makes it more of an individual competition.

Furthermore, it also reveals good overall balance between unilateral and bilateral exercises, which is important as far as performance is concerned, both in terms of lifting performance and athletic performance.

If you’re strong bilaterally but can’t express that strength on one leg, then you’re leaving something on the table. Conversely, if you’ve got great balance and can do well with single-leg exercises but you just aren’t that strong overall, that’s not good either. Ideally you’d be good at both.

A lot of people misinterpret me advocating single-leg work as trying to somehow denounce bilateral work as if the two are mutually exclusive, but it should be a symbiotic relationship, each augmenting the other.

My bilateral lower body exercises have improved tremendously as a result of increased unilateral strength, but the converse is also true. When I first started doing Bulgarian split squats I was using measly 40-pound dumbbells, but within just a couple months’ time I was up to 275 pounds for 6, and a few months after that I was over 300.

But bear in mind I could also deadlift over triple bodyweight and front squat over double bodyweight when I started on my single-leg journey, so while those increases are huge, it wasn’t so much that I actually got stronger during that time as it was more learning to translate my strength to a new exercise.

I wouldn’t have been nearly as proficient with single-leg work had I not built up a solid base with bilateral exercises. Therefore, the two should be used synergistically for best results.

With that in mind, based on my own numbers and those of my athletes, a good benchmark to shoot for is to be able to Bulgarian split squat half of what you can trap bar deadlift with the low handles, with good form.

Why the Trap Bar Deadlift and Not the Squat? 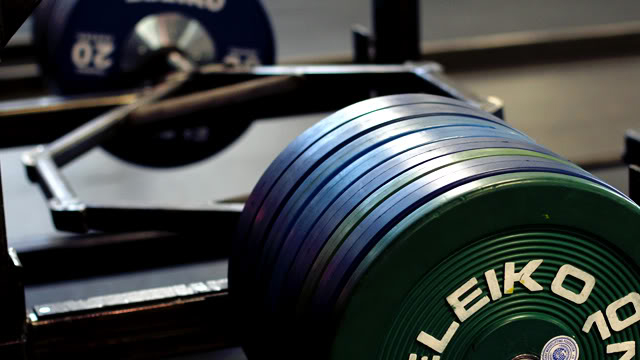 From a practical standpoint, I don’t squat regularly and neither do my athletes, so I don’t have any point of reference. Trap bar deadlifts – which many argue is more of a squat than a deadlift anyway – are a staple exercise, though, so I have considerable data for comparison.

But beyond that obvious logistical reason, I think the low-handle trap bar deadlift might be a better comparison anyway, for a few reasons.

For starters, deadlifts are easier to judge. The bar must touch the floor on every rep, so there’s no grey area on the range of motion. With squats, the depth issue confounds things a bit more. You could use a box to regulate depth, but then how do you establish a fair box height?

If you use the powerlifting standard and say you must go down until the crease of the hip is below the knee, then that’s not consistent with the depth of a Bulgarian split squat. If you look closely at a Bulgarian split squat, most people end up being a couple inches high of parallel in the bottom position – about the same position you’re in at the bottom of a trap bar deadlift when pulling from the low handles.

Taking it a step further, people’s squat strength will be extremely variable based on their anthropometry. Some are built to squat and can hoist huge numbers with relative ease while others aren’t and will habitually struggle with the lift no matter how hard they try. Trap bar deadlifts and Bulgarian split squats typically lend themselves better to a wider range of body types, so there won’t be as much disparity between lifters.

Moreover, most of the time when we’re dealing with Bulgarian split squats, we’re holding dumbbells, and so it makes sense to compare to a lift where the weight is also in the hands.

One potential issue with having the weight in the hands for either lift may be grip strength, so if that becomes a problem, just use straps. Interestingly, I’m finding that if people struggle with grip, it tends to be with holding heavy dumbbells for Bulgarian split squats and not on trap bar deadlifts, even though the total load is significantly higher in the deadlift.

However, because the trap bar deadlift comes out to about twice the Bulgarian split squat for people proficient with both exercises, it makes for much cleaner numbers and is thus more practical and useful.

Here’s one of my 16 year-old hockey boys crushing 210 pounds for 11 reps on Bulgarian split squats, with more in the tank:

A Closer Look at the Numbers

This comparison assumes proficiency with both exercises. People new to Bulgarian split squats are usually nowhere near half of their trap bar deadlift, but with several months (or even weeks) of practice it improves dramatically once they start to feel more comfortable with the exercise and their balance improves.

In fact, in time a lot of lifters will find that they can actually handle a bit more than half of what they can trap bar deadlift, and some a lot more.

For athletes, if you’re off from that ratio, I’d actually rather see you skewed more towards the unilateral side of things, whereas if you’re just a general lifter looking to get stronger and look better, or are someone specifically concerned with improving your squat and/or deadlift, then unilateral strength isn’t as important. It’s still very valuable though, so you should still strive to at least be in the ballpark.

Note: If you’re a strength athlete who can deadlift monstrous loads, then it’s probably not realistic to think you’d be able to do half that weight on a Bulgarian split squat, and it might not even be safe to try.

Every exercise has limitations and reaches a point of diminishing returns, but most lifters aren’t anywhere near that point. That’s just for the abnormally strong outliers and won’t apply to 99% of people reading this.

Getting Up to Snuff

If your Bulgarian split squat numbers are nowhere near half of your trap bar deadlift, it’s probably due to one of two things (or both).

If you roundback the hell out of your deadlifts and slam the weight off the floor between reps, your numbers will be inflated in relation to your Bulgarian split squat. That’s because it’s relatively harder to cheat a Bulgarian split squat since you’ll get sloppy if you lose your balance. So use good form.

If this is the case, it’s time to make single-leg work a higher priority in your training.

This means rather than skipping it or tacking it on at the end of your workout when you’re already smoked and ready to go home, it might behoove you to put it first in your lower body workouts so you can hit it while you’re fresh.

Of course you don’t have to do your single-leg work first, but it’s an option I’ve found to work very well for bringing your unilateral strength up to snuff quickly.

If you struggle with Bulgarian split squats, start with bodyweight split squats with both feet on the ground until you’re comfortable before attempting to elevate the rear foot, at which point you should again start with just bodyweight in the “prisoner position” (hands behind your head).

Once you’ve maxed the dumbbells that way (plus a weighted vest if you have one available), move to the barbell.

With barbell loading, some people feel more comfortable with the bar on their back while others prefer the front squat grip. If you’re strong enough to worry about that, you can make that call for yourself.

So to recap, good goals for Bulgarian split squats might be 220 for 6 reps, 1.25 times bodyweight of additional loading for 6 reps, and/or 50% of your low handle trap bar deadlift numbers.

Choose the goal(s) that makes the most sense for you, but try not to overthink the details and instead focus on the bigger picture.

If you don’t trap bar deadlift, you could try to approximate what your numbers might be based on other lifts, but don’t lose sleep over it. And if you don’t like Bulgarian split squats or they don’t agree with you for whatever reason, pick another single-leg exercise (or a few) to get good at.

Similarly, don’t fret if your numbers don’t compare exactly as they’re intended to be a general guideline. You may think I’m off base either high or low, but at least try to see the message I’m trying to convey.

For those that have nixed bilateral exercises for injury reasons, or just for personal preference, I hope this article gives you something to strive for strength-wise with your unilateral work. Remember, choosing single-leg work is not an excuse to be weak.

For those of you with a unilateral strength deficit, I hope this gives you that friendly push to start working on bringing it up. If you weren’t sold on its value yet, I’d wager your opinion will change as you get better at it and your strength increases.

And don’t be surprised if your legs undergo some nice growth in the process – which is never a bad thing!