First, I apologize if I left out one of your favorite exercises. Don't take it personally. I performed these experiments in my garage, and while I have one of the baddest garage gyms in Arizona, I don't have a lot of machines. I realize that the hip sled, leg extension, hack slide, smith machine, and various leg curl and calf raise machines are an important component to plenty of bodybuilders' lower body workouts, but I was unable to test them for the time being.

I do, however, have some results from past experiments that I'll elude to toward the end of the article which will shed some light on muscle activation as it relates to lower body machines.

I also regret that I could only test four muscles at a time, since the instrument I used to measure EMG activity only has 4-channels. I'm also sorry I couldn't test more individuals. These experiments are very labor-intensive; in order to measure every exercise on every muscle part using a variety of subjects would be a project of colossal proportions.

Just remember this: people are different, but not that different. What's true for me is probably true for you.

I'm not going to make any judgments regarding the safety of any exercise. I realize that certain exercises pose greater risks to the joints than others, but every guy has the right to train however the hell he chooses. As lifters, we can choose to assume a lot of risk or little risk since we're the owners of our bodies. Good form, a natural tempo, and a full range of motion were always used in these experiments.

One last thing: In bodybuilding, powerlifting, and sport-specific training, it's not all about EMG. Range-of-motion, positions of peak contraction, directional load vectors, levels of stability and instability, transfer through other parts of the body, total muscles and joints worked, specificity, ability to produce muscular soreness, ability to produce constant tension, joint-safety, and conduciveness to going extremely heavy are all important components.

Now that the pre-flight safety announcement list of warnings is over, let's get to it. Are you ready to build huge wheels and enormous calves?

Since this is a bodybuilding experiment, I used weight that was light enough to allow me to perform at least five repetitions. The mean number is on top and the peak number is on the bottom. (If you don't know what I'm talking about, please read What Are Mean and Peak Activation? )

The Skorcher is an apparatus I invented and patented which allows the lifter to perform band hip thrusts with the shoulders and feet elevated so the hips can sink down through a full range of motion against maximum band tension.

It's also possible to perform barbell hip thrusts and single leg hip thrusts off the Skorcher. I have no aspirations to manufacture and market the invention, as I don't believe the current economy is conducive to new fitness products, not to mention the fact that the Skorcher looks very archaic and I'm far from convinced that there would be adequate demand for a specialized glute machine that is foreign to most exercisers. (It also involves an extremely embarrassing looking movment, where you basically hump the sky.)

Although it's not possible for T NATION readers to use a Skorcher for hip thrusts, I included the Skorcher data in this article to alert the reader that there is an optimal way to work the glutes, and with a little innovation, you may be able to rig something up if you have a garage-gym.

Since my glute article came out last year, I've seen absolutely horrendous hip thrust videos on Youtube. I guess I should have seen this coming, as all one needs to do is take a quick trip to any local gym to witness piss-poor form on squats, deadlifts, and bench presses due to "ego-lifting".

This led me to film an entire instructional video for the hip thrust. In short, it takes time to get good at hip thrusts and glute bridges; you must control the weight and use a full range of motion by bending solely at the hips and not the spine, and avoid compensating with the lumbar spine.

If any lift in this experiment had an "unfair advantage," it was the pull through. When going heavy, I often struggle to maintain balance and find myself being pulled out of position mid-set. To prevent this from happening, I rigged up a series of two-by-fours that were positioned directly behind my heels to help me with my balance. This allowed me to go much heavier than normal and get a much better glute workout.

If any lifts in this experiment had an "unfair disadvantage," it would be the box squat and step up. Both involve an abnormally long pause during the movements which decreases mean activation levels.

Each exercise in this experiment was performed in the same session in order to maximize accuracy. In EMG, exercises tested with the exact same electrode placement and MVC trials will be much more valid and reliable than exercises tested during subsequent sessions.

Conversely, machine hack squats appear to slightly edge out squats in quad activity and seated adductions greatly outperform all hip extension exercises in adductor activity (save for the hamstring part of the adductor magnus).

These results are somewhat surprising given that I am 6'4" and often wondered if the leg press or smith machine squats worked my quads harder than free weight squats or whether any leg curl machines worked my hamstrings harder than various straight leg hip extension exercises. (They don't come close.)

Upon examination, many individuals will look at the EMG chart and say to themselves, "What? Lunges make my glutes so sore. What gives?" Or, "What? Good mornings cripple my hamstrings. What's the deal?" Exercises that really stretch a certain muscle while providing maximum tension during that stretch tend to produce the most soreness.

Exercises that place consistent tension on a certain muscle, especially at the terminal position of the movement, tend to produce the most occlusion, hypoxia, or "pump."

One without the other will likely yield suboptimal results.

This is due to the increased inherent stability involved in bilateral lifts. Single leg training definitely has its place due to balance, multiplanar stability, coordination, sport-specific training, and decreased spinal loading, but double leg training should always be prioritized regardless of the training goal.

I've actually tested the EMG activity of crappy squats and deadlifts. Specifically, I loaded up my 1RM and performed a "squat-morning" and a "rounded back deadlift." In the case of the squat fallen-forward, hamstring and spinal erector activity increased while glute, quad, and adductor activity decreased. In the case of the round-back deadlift, erector spinae activity increased while glute, hamstring, quad, and adductor activity decreased.

As I mentioned earlier, I am 6'4". Despite my height, squats are still my best quad exercise except for possibly machine hack squats, and deadlifts are still my best hamstring exercise. I should mention that I'm pretty darn strong at machine exercises; I can do 800-900 lb leg presses with a full ROM and usually rep out with the entire stack on leg extensions, lying leg curls, and seated leg curls.

It appears to be a really good position to "turn on" the glutes. I was very surprised to find that the hip belt squat and straddle lift did not activate much quad, hamstring, or glute musculature in relation to barbell variations. I was shocked to see how good of a job the weighted bird dog does at activating the glutes and hamstrings.

Also, it appears that back squats work more quad than front squats and deadlifts work more hamstring than RDL's. Weird.

What if I would have tested other quad, hamstring, and adductor muscles? Is it possible to target more outer or inner quads, hamstrings, and calves based on foot position? What if I utilized fine wire EMG instead of surface EMG? Would that have changed the outcome of the experiments?

All in all, it was still an extremely productive experiment, and there's always time for more testing down the road. Clearly more research is needed, as it's impossible to anticipate everything prior to an experiment, no matter how prepared and organized you seem.

Based on the results of this experiment, I bet the following would be one kick-ass workout that'd target the quads, hamstrings, glutes, and calves. Enjoy! 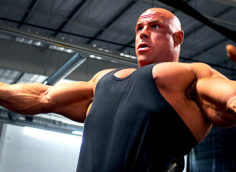 Most of you are too weak to put on muscle. Here's a simple 40-day program that will make you strong and buff.
Bodybuilding, Powerlifting & Strength, Training
Dan John May 19