The deadlift is the most talked about exercise on the internet. In fact, the number of deadlift articles on T Nation alone may very well surpass the number of Wilt Chamberlain's alleged sexual partners.

Now I love deadlifts as much as the next meathead and consider them to be one of the absolute best overall exercises for strength and muscle-building, but I'd be lying if I said I didn't get just a little sick of seeing the same old info about how to deadlift correctly or what assistance exercises to employ regurgitated seemingly ad nauseum.

However, here's one simple but highly effective tip that you probably haven't heard before. It's one that's helped me increase my pull tremendously and should also help you, regardless of your pulling style or what program you're following.

Try doing your first few warm-up sets from a deficit.

Deficit deadlifts are one of those exercises that sound like a great idea on paper. They're often touted as a great assistance exercise if you tend to be slow breaking the bar off the floor, and the increased range of motion will theoretically recruit more of the posterior chain and quads, thereby giving you more bang for your buck.

Trouble is, theory doesn't always translate to practice, and what happens is that most people lack the hip mobility to pull any substantial weight from a deficit with anything even close to resembling a flat back. For that reason, I rarely recommend heavy deficit pulls for the vast majority of lifters.

Light weights are a different story though. I like doing my first few sets from a deficit for several reasons:

1 – It helps serve as a great warm-up to loosen up the hips and work on improving hip mobility.

Mobility work is extremely important, but I'm much too impatient for long, drawn-out warm-ups. And when it comes to lifting, I much prefer warm-ups that are specific to the exercises I plan on doing in that workout.

Light deficit pulls are a great drill for increasing your hip mobility and since you're going to do your warm-up sets anyway, you might as well kill two birds with one stone.

2 – It helps reinforce the notion of keeping your hips down.

One of the biggest problems people have with the deadlift – regardless of their pulling style – is the hips shooting up at the start of the pull as they try to break the bar off the floor. This not only makes for a weaker pull, but it also puts your lower back at an increased risk of injury.

Pulling from a deficit forces you to exaggerate getting your hips down, so when you remove the deficit for your heavier sets, it's much easier to do it correctly.

Better form equals potentially bigger pulls with less risk, which is a win-win.

After pulling from a deficit, pulling from the floor feels like a breeze, almost like you're doing a rack pull. And when the form feels easy, it allows you to think less about what you're doing and just clear your mind and rip at it. Confidence and attitude are a huge part of pulling big weights.

4 – It makes you pay attention during your warm-up sets.

One goal of warm-up sets is obviously simply to warm up and acclimate yourself to the weights, but warm-up sets are also a good time to rehearse good form and get mentally locked in. That takes focus though, and far too often people just blow through the warm-up mindlessly and go through the motions. They don't respect the weights until it's hard.

However, just the act of getting into position for deficit deadlifts is reasonably hard even if the weights are light, so it forces you to focus on the task at hand and be aware of what you're doing and how you're moving, which makes for a more productive use of your time.

This strategy can work regardless of what deadlift program you're on because it has no bearing on the actual working sets.

Work up just as you normally would, but pull your first 1-4 sets from a deficit.

I'm remaining deliberately vague with the recommendation because a lot depends on your current strength and mobility levels.

Let form be your guide. Pull from a deficit until your form starts to slip and then ditch the deficit and pull from the floor for your heavier warm-up sets and working sets. The key with these sets is to keep your hips down. Once they start to shoot up at the initiation of the pull, you're done.

Don't try to be a hero on your freakin' warm-up sets. They should feel easy from an exertion standpoint, but somewhat challenging from a focus standpoint because you want to be extra vigilant about your form.

At first, you'll likely struggle even with really light weights, so you may only do 1-2 sets, if that. You may even find that you need to do some more aggressive mobility work before you can try this strategy. No shame in that.

In time though, as your mobility improves, you'll find that you're able to go deeper into your warm-ups from a deficit while maintaining good form.

How big of a deficit should you use?

For practical purposes, I either pull standing on a smooth metal plate (1-1.5 inches) or a four-inch aerobic step. I only do the higher deficit though with very light weights (225 and under, usually) or else it gets really ugly, fast. Plus, aerobic steps often aren't built to accommodate a lot of weight, so you don't want to break through. I've learned that the hard way, unfortunately.

Other Points to Consider 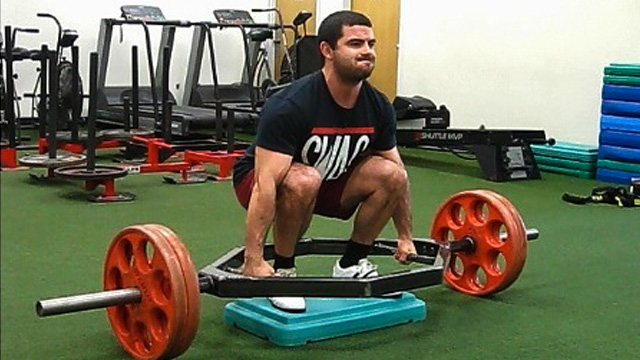 And That's a Wrap!

Give this strategy a try. I think you'll find that your deadlifts feel a lot stronger without adding any time to your workout. If anything, it actually cuts down on your total workout time because it eliminates the need for tons of mobility work (though I still recommend doing some).

And if this idea doesn't work for you, you can always just default to my favorite tip of all, which is an almost surefire way to deadlift bigger weights – man up and pull harder!

With smart training, not only should your lifts go up, but your posture should improve as well. Here’s how to make it happen.
It Hurts Fix It, Mobility, Training
Mike Robertson March 27