Shoulder training used to be one of the cornerstones of any man's training program. There was a time when developing wide and full deltoids was such a priority that many men actually spent more time training that complex muscle group than any other!

Old-time bodybuilders would do a lot of volume for the shoulders in hope of creating that elusive V-shape and it worked! By emphasizing deltoid development, many "structurally challenged" men were able to give the illusion of width despite a relatively narrow shoulder girdle/clavicle.

You only have to think about Larry Scott. Scott started out shaped like a traffic cone until he began to blast the hell out of his delts! In fact, there was a time when he was considered to have the best shoulders in bodybuilding! 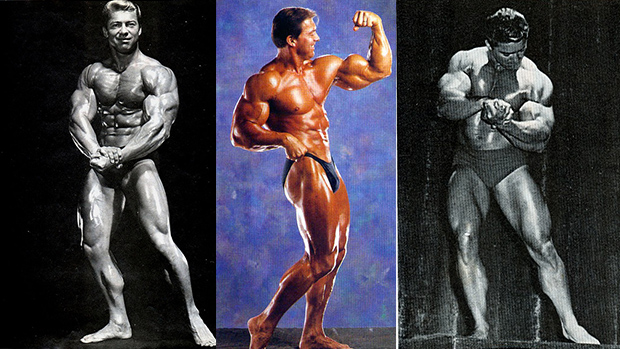 Other good examples of naturally narrow shoulder structure being overcome by sheer will include Mike Mentzer and Mohammed Makkawy, both former Mr. Olympia runner-ups. Look at both pictures of Mentzer; in the first one he's in shape, but far from his best level of development. Notice his narrow shoulder structure, yet in the second picture he looks like a monster! 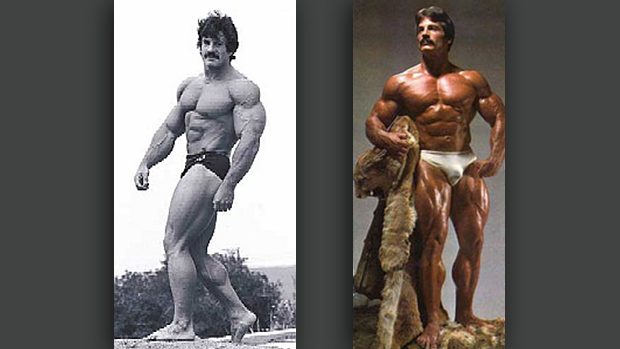 I'm also an example of a guy with a naturally narrow shoulder structure who was able to correct the situation by building up my delts as much as possible. The picture presented below is one of my girlfriend Christiane, who shows just how impressive fully developed shoulders can look! 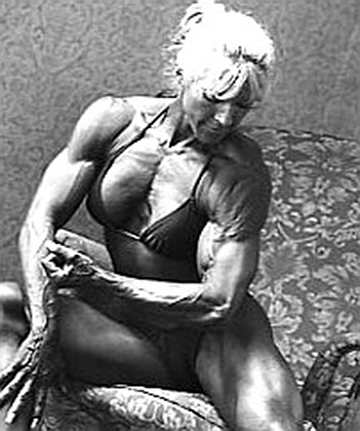 However, the pendulum has swung the other way! Now most coaches are actually advocating the avoidance of direct deltoid work. The reason goes something like this: "The delts receive enough stimulation when training the chest and the back."

While this might be true in some individuals who are genetically gifted in shoulder development, I'm completely against this way of thinking. Here's why:

The bottom line is that if you want to build an aesthetic and complete physique, there's just no way that you should avoid shoulder work, especially for the lateral and posterior portions of the muscle group. We'll still include some anterior delt work to make sure that we make our shoulders as big as possible, but emphasis will be on the two other parts of the muscle group.

As mentioned in Part 1 of the HSS specialization series (for back), when you're specializing on one muscle group you should increase the training frequency for that muscle while decreasing the training volume for the other groups: down to 1-2 exercises performed for 3-4 sets. Failure to reduce the volume of work for the non-targeted muscle group will lead to stagnation and possibly overtraining. Don't do it!

So, without further ado, let's get to the program!

This exercise is very similar to an old-time strength feat called the iron cross or crucifix, which consisted of holding a dumbbell or pair of dumbbells at arms length by the side of your body and parallel to the floor (forming a cross with your arms and body). 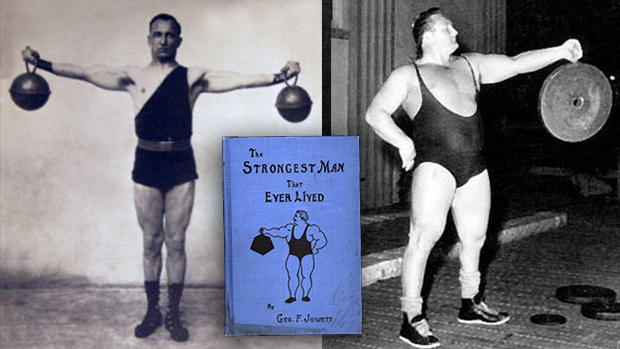 This lift is still used in many strongman competitions around the world, sometimes for max weight, but mostly for max time. We aren't going to be using the holding variation, but we will inspire ourselves with this feat of strength to design a type of dumbbell pressing that'll focus most of the stress on the lateral portion of the shoulders.

We want to perform the unwinding press in such a way that it truly places a lot of training stress on the lateral head of the deltoid. Here's how we're going to perform the movement: 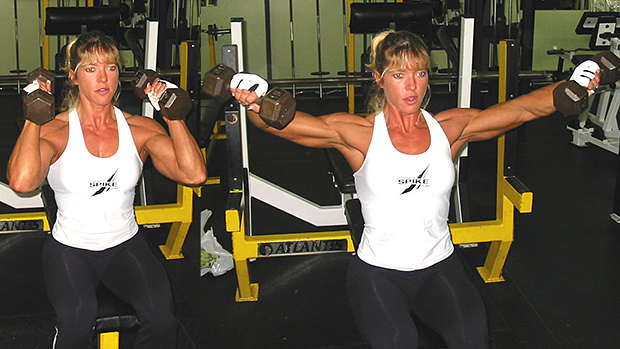 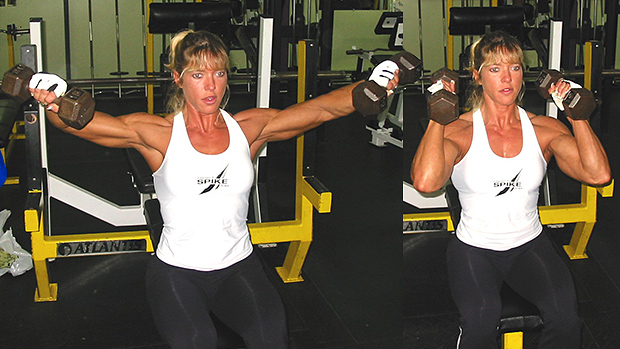 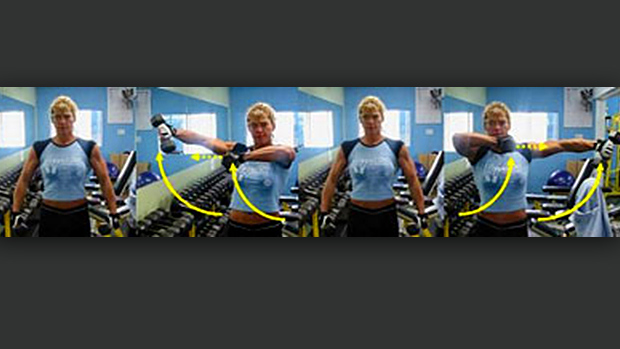 This is one exercise that's really surprised me over the past few weeks, so much so that it has actually become my favorite movement to build massive delts! When I first read about the drill I was a bit sceptical. After all, it did look like a simple side lateral with the added "crooked rep" for the opposite arm. I couldn't see how this movement could actually place more training stress on the shoulder.

But, after all, it is a Gironda movement, and the man was rarely wrong when coming up with innovative new exercises. So I gave it an honest try, and boy, am I glad I did! The "crooked" lateral portion of the lift is the money portion of the exercise. At first I thought that it would actually contribute little to the stimulating effect of the movement, but after playing with the exercise I quickly noticed how much of a difference it makes!

It does hit the shoulder in a new way, and this provides a brand new training stimulus to turn your shoulders into boulders! The real key to make the "crooked" portion work is to lift the arm in front of your torso, but as you reach the higher part of the movement, you should actually push the dumbbell (slightly extend the arm) toward the other arm (the one performing the "regular" lateral portion of the lift). 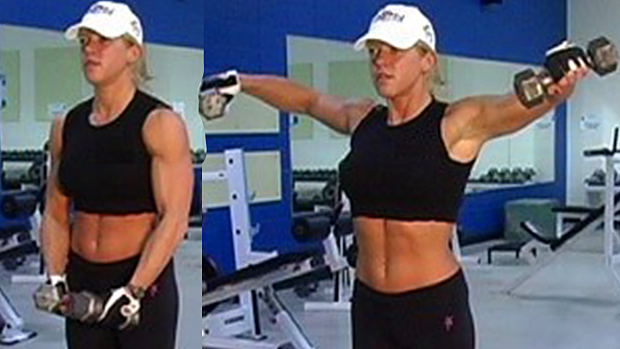 Essentially, bring the arms up so that at the end of the movement the back end of the dumbbells is higher than the front end. This position greatly reduces the involvement of the anterior portion of the deltoid and as a result places more stress on the lateral head. 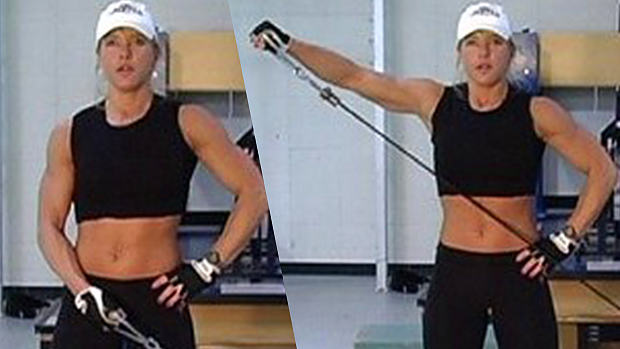 "Muscle rounds" is a technique created by Leo Costa which is basically a high-volume variation of the rest/pause technique. Each set is composed of four mini-sets of six reps. There's around ten seconds of rest between each mini-set for a muscle.

In the case of unilateral movements like this one (one arm is trained at a time), you don't take additional rest: the right arm partially recovers while the left arm works and vice-versa. So one muscle round/set for this exercise would look like this:

This is one set (or one muscle round). You should select a load that you could normally perform for around 12 reps, so you'll end up doing 24 reps with your 12RM. 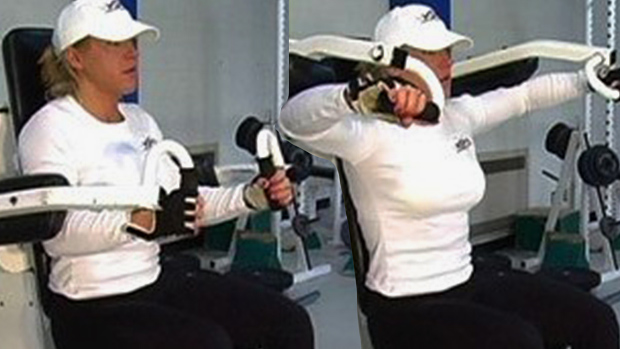 Really, there's no need to explain this one! The goal is to get the 100 reps without any pauses. At first it might be impossible because the deltoids seem to be a muscle group where lactic acid accumulates fast and the reps can quickly become painful. So a few 4-5 second pauses here and there are acceptable, but gradually try to eliminate them.

This is the bread and butter lift for thick shoulders. While it won't give you much width (we already have one full day for that!), we're still after complete shoulder development, so might as well use the most powerful exercises to do the job!

The push press is basically a cheated variation of the standing military press. The shoulders and arms still do most of the work, but you use a small "leg kick" to get the bar moving off the clavicle. This will allow you to use more weight and really overload the delts. 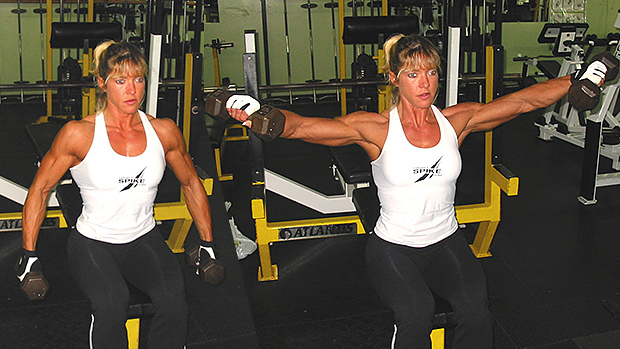 As I mentioned, we want to promote full shoulder development; however, we still need to place more emphasis on the lateral portion of the deltoids to create the illusion of more width and of a more aesthetic physique. This is why in this superset we'll use the pre-fatigue method (isolation exercise before compound movement), selecting an isolation exercise targeting the lateral portion of the deltoid.

The seated pitcher raise is essentially the same exercise as the standing pitcher raise that we saw earlier. The main difference is that since you're seated, it's harder to cheat and, most importantly, the fact that you're seated means that the dumbbells must start on your side and not in front of you. This gives a slightly different stimulus at the start of the movement. As they say, always try to attack the enemy from many fronts! 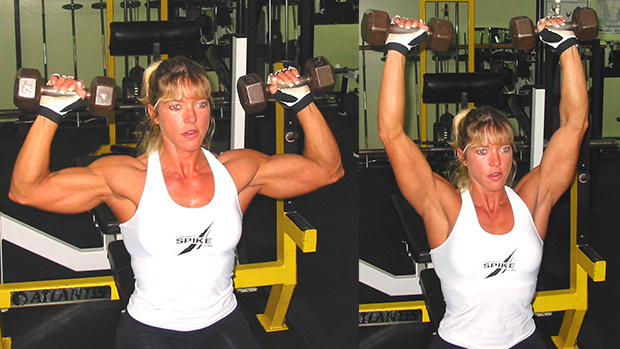 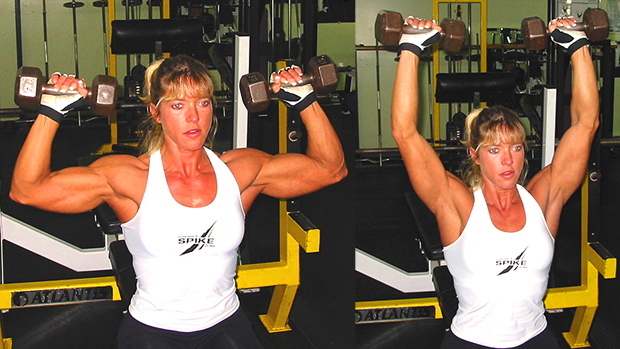 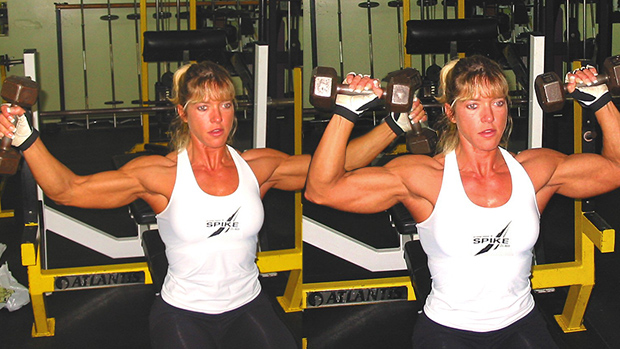 In case you've been living on Mars, in a cave, or in Arkansas (kidding, guys), you know that a muscle is stronger during the eccentric (lowering) portion of a movement. We also know that overloading the eccentric portion – called accentuated eccentrics – is a great way to stimulate hypertrophy/muscle growth. This is just what this exercise does.

Again, this one is self-explanatory. The goal is to get the 100 reps without any pauses. A few short pauses here and there are acceptable at first, but gradually try to eliminate them. You don't need to lock out your reps. In fact, for the purpose of this exercise, three-fourth reps are actually better.

A. (Heavy Exercise) – Seated row to mid-pec line with elbows out 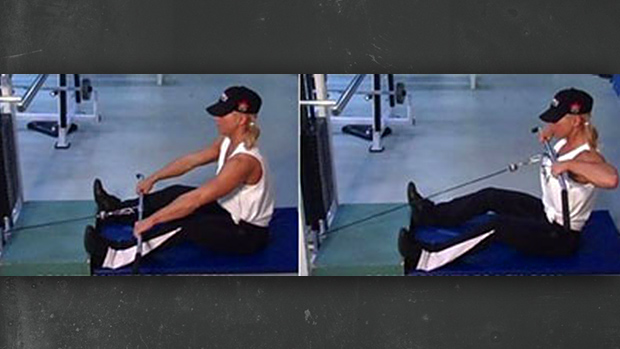 This nice exercise will thoroughly trash the rear deltoids, upper and mid trapezius, as well as the rhomboid muscles. In other words, it'll make you thick and as a bonus will help you correct several antero-posterior muscular imbalances. We want big muscles, but if we can get injury-free at the same time, why not take it?

The keys for the proper performance of this exercise are as follows: 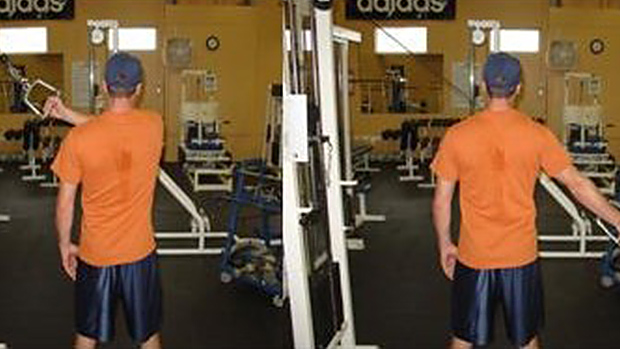 This exercise is pretty straightforward: Grab a single handle from the high pulley station. While keeping your whole body straight, bring the arm outward and down toward your hip joint using as wide an arc as possible (in other words, keep the arm perfectly extended during the whole movement).

A possible variation is to replace the handle with a rope and perform the exact same movement with a pronation grip (palm facing down). 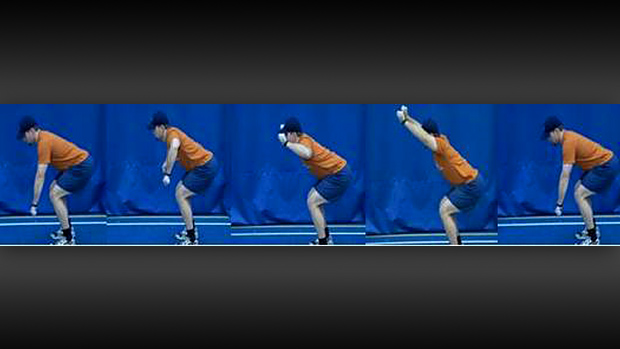 Here's an interesting exercise you may not have seen before.

* I'd like to thank my good friend and member of the Junior Canadian National Baseball team's coaching staff, strength coach Phil Tomlinson, for the pictures of these last two exercises. 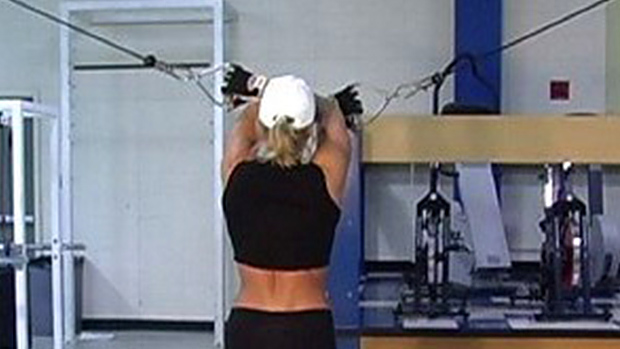 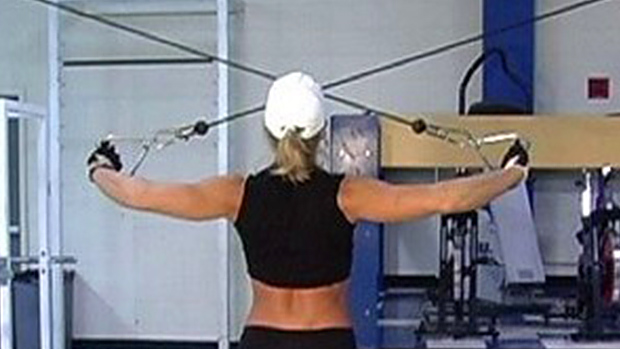 This wraps up the second portion of the HSS-100 specialization series! Hopefully you'll be able to take a lot from it, either by following the program and building some humongous deltoids, or simply by learning a few new exercises that'll allow you to stimulate a little growth in an otherwise stagnant shoulder development.

The third installment of this series will deal with chest specialization. Stay tuned! 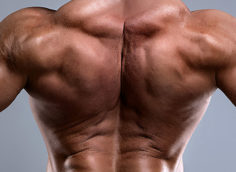 Build your upper back and lats with the exercise you just can't cheat, no matter how hard you try.
Training
Michael Shaughnessy February 26 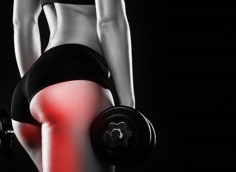 After training you have a 5-15 minute window of opportunity to greatly accelerate recovery and overall progress. Here's exactly what to do.
It Hurts Fix It, Plazma, Soft-Tissue Techniques, Training
Dr John Rusin May 18
In Part I of this article, I carefully picked out seven of Charles Poliquin's principles and tried to make them a little easier to understand. Of course, as I mentioned, picking out only seven was a little like trying to pick my top seven favorite Hanson songs?okay, bad analogy.
Training
TC Luoma August 7