How to Squat: A Big Fella's Guide

The squat is difficult when you're a big boy. Sure, it's not uncommon to see lifters of all body types force-feed the movement. They keep tirelessly performing the lift, but it just isn't right for their body. And it can go beyond just having unfavorable leverages. Sometimes the lifter's just a large customer.

Whether we're talking about being a fat bastard, having a lot of muscle mass, or a mix of both, having a body that occupies a lot of room in every machine, rack, or setup can be as frustrating as it can be fun, depending on the circumstances.

Take squats, for instance. What most commonly hinders correct performance is a lifter's overall size.

Big guys usually carry a lot of mass in the hip region. It's possible some extra gut space is blocking their range of motion, or the lifter is just plain immobile (or both).

One strategy is to focus on a slightly wider stance (after a warm-up). It could be exactly what's needed to achieve some reasonable range of motion to give your legs and trunk the clearance needed to break parallel.

Another trick to achieve more range of motion is to static-stretch the quads before every set. "Wound up" hips and quads tend to block a lifter from achieving a good range of motion. Sure, static stretching can sacrifice a smidgen of your potential strength on any given set, but it'll result in better performance and better lifts in the long run.

Oh, if you're expecting me to tell you how to static stretch, forget it. Any of those simplistic stretches you learned in junior high gym class will do, from single knee-to-chest stretches to kneeling lunge stretches. A stretch of 30 seconds or so before each set will do nicely.

Big guys usually have lousy shoulder mobility. Consider what they have to overcome during overhead pressing. They have all that upper body mass to get around before they can even put their hands in the proper place on the bar.

Invariably, some sort of compensation occurs, usually in the form of overarching in the lumbar region (to accommodate for immobility at the shoulder).

For barbell squatting, this compensation usually takes the form of an ultra-wide hand position. Heck, I'm even guilty of going a bit wider with the hands when I back squat because I find it comfortable.

I can only imagine what it's like for guys tipping the scales at over 300 – especially if that's coupled with a stockier frame with shorter extremities. It's a big ask to hold a barbell on the back with the hands near the shoulders. Further, they often can't screw their elbows downwards, resulting in poor squat posture and squat performance.

One rule is to remember that the health of the knees and elbows are prisoner to the health of the ball and socket joints that lie immediately above them (the hips and shoulders, respectively). If the elbows are ailing or their mobility is lacking, it's imperative to address how the shoulders perform.

Yeah, I'm talking about shoulder mobility or the lack of it. That's where shoulder dislocates are called for. If ignored, elbow tendonitis is on the horizon.

Big guys afflicted with this problem and the tight hips described earlier need to come up with squat alternatives until those two problems are addressed, like the ones below.

The safety bar is one of the most underrated pieces of equipment, and, fortunately, it's becoming less and less obscure. It was almost impossible to find one ten years ago unless you belonged to a niche powerlifting gym or performance center, but not anymore. The safety bar is arguably the most comfortable squatting tool in the game. It completely solves the problem of shoulder or elbow discomfort because the hands and elbows point down instead of being forced into an uncomfortable position on a straight bar.

The best part about the safety bar? The load is still technically positioned on the back, enabling you to still use a significant load. It's more comfortable for me to use a slightly wider stance when using a safety bar. I'm sure the orientation of my hands and arms has something to do with this, but it also creates more hip space to get down low.

Just remember, most safety bars weigh more than Olympic barbells, so factor that in.

The Frankenstein variation of the safety bar squat is handy for chasing depth and a good hit for the quads and core. Again, it's a way to save the shoulders and elbows from unwanted stress. And the front load can potentiate a greater range of motion that big guys often lack.

This movement will take some getting used to. It's best suited as a lighter-load exercise to help groove the pattern and challenge muscular endurance while using good form. There's essentially no cheating since almost any irregularity in patterning will cause the bar to fall.

Don't try to be a hero. Just focus on keeping the torso upright while pushing outward with the knees. It's easy for the elbows to bend and the hands to sink, so don't let it happen. Make strong fists and keep the hands above the level of the bar.

A lot of big boys can't get a good clean grip while doing front squats. They have too much upper-arm mass or have poor wrist, elbow, and shoulder mobility. Tying a pair of lifting straps to the bar can overcome all of this.

Holding onto straps gives you a few vital inches of space between the hands and bar. It also encourages a pulling action that can lend itself to higher elbows and a more mechanically sound front squat.

As a bonus, it beats the potential imbalances that can arise from the more conventional California-style cross-armed grip that's pretty damn uncomfortable when using heavier loads.

They're harder to find, but the cambered bar, especially when paired with parallel box squatting, is another solution for big lifters. A lack of elbow or shoulder mobility becomes largely irrelevant because the bulk of the weight is positioned much lower. Also, the vertical handles allow more room to play with your grip.

Another interesting effect? The novel positioning of the weight places a different stimulus on the lower body – in my case, more glute activity. Combining this move with a dead stop allows for a squatting movement where no transfers of force or momentum are allowed.

Never forget that shedding a few pounds or improving mobility is a worthwhile goal. It's easy and fun to walk around tipping the scales at 300, but it doesn't mean it's smart or healthy.

Use the above advice when necessary, but work on the smart stuff and keep the mobility drills and conditioning work in your program until your performance (and possibly your physique) change for the better. You're in this for the long haul. 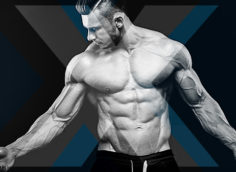 Strong core, strong body. But you need more than traditional ab exercises to get it. Try these out.
Abs, Training
Michael Boyle August 30 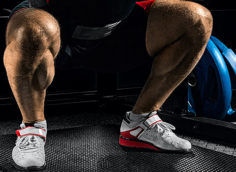