What’s the first thing that comes to your mind when you see a tall guy in the gym?

Besides saying, “Damn, he’s tall,” you’re probably thinking the guy either plays basketball or paints ceilings for a living. Or even worse, you say to yourself, “Man, he’s skinny.”

For the most part, “skinny” is a great way of describing most tall guys in the gym and in life. After all, it’s not exactly easy to fill out a frame with long legs and arms using conventional dieting and training methods.

And that’s exactly why you have to reach up to the top shelf for some new ideas. 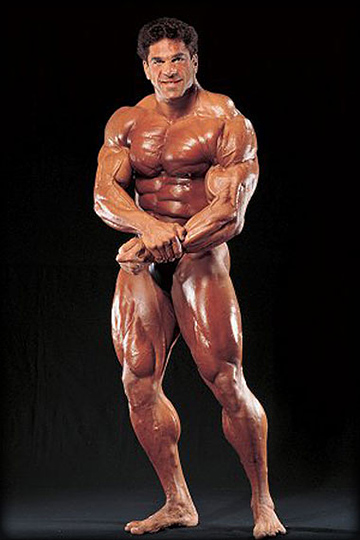 If you developed like most tall kids do, you were pelted with comments like “lanky,” “awkward,” or “uncoordinated” as you struggled to grow into your body.

When you’re young and impressionable, that sucks. Why are all the shorter kids better in sports? You just don’t have an answer.

Luckily for me, I was an ’80s baby and could turn on the television and see the Incredible Hulk. Sure, I didn’t know that in real life he was 6’5″, but it was obvious that Big Louie was so much bigger than everyone else on screen, and it didn’t have as much to do with his size as it did his height.

And since bodybuilding has a certain fondness with its “golden era” stars, Louie was still in heavy rotation on magazine covers, which meant that taller people had hope that they could pack on some serious size.

Regardless of all of the fantastic things that Arnold Schwarzenegger did for this sport, he still did it standing next to 5’6″-ish people like Franco Columbu and Frank Zane, so you couldn’t look to Arnold for training inspiration. We all got motivated by the black and whites, but when you’re growing up tall, you quickly realize that there are certain exercises you just can’t do. Has anyone ever seen a picture of Lou squatting? I think not.

Be Tall, Get Jacked

For the purposes of this article, I think it’s imperative that we define what “tall” means.

According to the National Center for Health Statistics, the average height for an American male is 5’9″. In 1994, the Third National Health and Nutrition Examination Survey reported that only 0.5% of American males were over 6’4″. So for argument’s sake, we’re going to lump everyone 6’0″ and over into the tall category.

Of course, the information presented is more applicable for every inch over 6’0″ you happen to be, but you’ll still get results following the guidelines, as will anyone under the cutoff.

Guideline #1 – Get Your Mind Right

You’d be a liar if you said that there was never a point in your life that you picked up a bodybuilding magazine and thought to yourself, “I can be that big.” We’ve all done it. The majority of people say they don’t have the dedication to stay in the gym as consistently as that goal dictates, but the few that do quickly realize that unless they live the entire lifestyle of grueling hours in the gym, numerous sacrifices, pharmaceutical drugs, and have fantastic genetics, it just won’t happen.

Unfortunately, for us tall guys, it’s a double no-no. I’ll point out some of the reasons as to why, but our biggest enemy is our mind. We dedicate ourselves to the gym, we don’t go out partying on a Friday night because we have to work on our legs on Saturday, and we’re uber focused on our nutrition, meal by meal. Yet, the 5’5″ guy who eats nothing but chicken and squash 12 weeks out from a bodybuilding contest, in our eyes, looks huge and ripped.

Mentally, that beats us down and makes us decide on dropping our calories or gorging on junk food just because that’s what we “need” to do to achieve that body. Listen, physiology is physiology and it applies to everyone, but tall lifters need to realize they need to take it a step further and have a laser focus on their training and nutrition.

You’ve heard about all the wonderful merits of classic, compound movements like the bench press, squat, and deadlift, right? According to some, these exercises can do everything from giving you 21-inch arms to a razor sharp stomach to unlimited fat loss. And while there’s a bit of sarcasm there, they’re fine exercises and you’ll do well keeping them in your program. If you’re over 6’0″, however, then you need to think twice.

This entire article can be summed up in the following statement: The majority of tall lifters’ troubles stem from their lever length (humerus and femur particularly) and their muscle attachments related to those levers.

Now I know some people will argue that shorter individuals can have longer levers, and at times, that’s true. I have a friend who’s all of 5’10”, but has arms that rival Magilla Gorilla’s in length. Sure, it happens, but it’s not nearly as likely as a tall guy having long levers. Tall guys, in particular, have long femurs (leg bones) that do a few horrible things, such as making leg work oh-so painful and causing various jeans to become high waters by default.

So, take a tall guy with long femurs and you make him squat the same weight as a guy who’s 5’7″ and what’s going to happen?

The tall guy will do more total work. We know that work equals force times distance. The tall lifter covers a larger distance (range of motion in the squat), but uses the same force (weight on the bar) as his vertically challenged counterpart. The tall guy has to do more work, so for a given amount of reps, he’s going to fatigue first.

Not to mention that the tall lifter’s hamstrings and spinal erectors are probably weak links (as are everyone’s), so he’ll be forced to incline his body further forward during the set, which wreaks havoc on his form and leads to stabilizing muscles fatiguing before the prime movers. He’ll have to end the set early, without fully stimulating the desired muscles.

So, what can a tall guy do to bring up his legs? 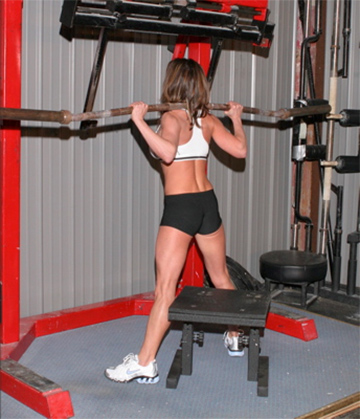 I really feel that intra-set rests where you pause at the top of a squat for 10 to 15 seconds without racking the bar is a very potent weapon for us tall guys. Not only does it help to restore creatine phosphate, but we’ll also increase our aerobic capacity for future squatting endeavors.

Lastly, keep the damn reps low. Enough of this 10 to 15 rep stuff. Remember, we’re tall, so the rules change. Therefore, when you’re squatting, shoot for around 4 to 8 reps for maximum benefits.

For what it’s worth, the current “tall” top bodybuilders at 6’2″ – Toney Freeman and Dennis Wolf – both have recently talked about their affection for the leg extension in terms of increasing leg size.

While we’re on the topic of being different, use the leg press. Sure, it’s a machine and most machines are built for the average height, but the leg press allows us to get a focused effort on our quads and hamstrings, as opposed to the issues presented above with the back squat.

When we move onto the bench press, we find some more glaring issues, this time because of the humerus (arm bone). Everyone wants jacked arms; it’s just reality. And believe me, I get angry when I see someone around 5’8″ with arms that look like bowling balls, but in reality they’re probably all of 15 inches when jacked.

Now take a minute to realize that the humerus dominates every major upper body lift that you can do. Factor in your muscle attachments being nice and long and you have a recipe for a bad bench and small arms.

Tall lifters also have the issue of flaring their elbows during pressing movements. Anyone that knows proper bench press technique will tell you not to allow your elbows to flare out when you press. Due to our lever length, we have almost no choice but to allow them to flare at the start of any type of pressing, especially when we’re under the bar with no spotter.

So, how do we resolve this?

Well, for starters, tall lifters need to bring their hands in more. Not as close as they would be in a close-grip bench press, but if you’re tall and feel the need to bench press, then you have to take a narrower grip. Doing this forces you to press in a straighter line and decreases the chances of your elbows flaring.

Being tall also means you’re going to have a fun time trying to lock out the weight at the top. Aside from having to do more total work in a single rep when compared to a short person, the lockout is a big issue.

As a result, traditional methods to improve the bench press won’t work as efficiently for us tall folk. Instead of focusing on different pressing angles, tall lifters need to incorporate more floor and board presses into their routine so that when they hit the sticking point going up, they’ll be able to blast through it.

I don’t like the idea that tall lifters were born to deadlift. Sure, we are more mechanically inclined to succeed in deadlifting due to the form required to deadlift and our long levers. But most tall guys actually sabotage their deadlifting success by not focusing on proper form because deadlifting comes so natural.

Because our femurs are so long, we have a tendency to straighten out and raise our hips too fast and rely on our hamstrings to pull the weight. Tall guys need to allow their feet to flare and really focus on pushing through the floor as opposed to pulling the weight up.

What happens if that slight technique tweak doesn’t work? Well then you have to get creative, and the one thing that’s worked the best to improve the rate at which my hips rise is to deadlift slower. Now I know that seems taboo, and I wouldn’t normally advocate that, but some techniques work with a slow pull and will allow us to pay attention to our hips and notice when they break too fast.

As is the answer in seemingly every other lower body problem, working the hamstring as a hip extensor won’t hurt either. Adding a few extra sets of stiff-leg deadlifts, pull-throughs, and reverse hypers will go a long way into building the posterior chain.

If all else fails, then revert to step aerobics. I’m not kidding. Grab one of those early ’90s steps in the gym and start deadlifting from a deficit. It’s a great way to overcome the hip issue and save your lower back from extra work when you straighten out too soon.

Most tall guys don’t do any of that, yet wonder why they’re the only tall guys to ever have problems deadlifting.

Be Tall, Get Jacked Principles

Up until this point I’ve talked about a few specific issues with each of the main lifts, but our problems don’t stop there. We can’t curl as much and our shoulder press stinks when compared to shorter guys. So, we need non-lift exclusive training methods to bring up all of our lifts.

That’s the Skinny on Being Tall

In wrapping it up, I just want to say this to my tall brothers from other mothers: Don’t worry about some short guy whose arms look huge. Chances are that yours are bigger. Embrace your height because tall guys get more beautiful women, make more money, and look better in suits.

Don’t look at that guy being bigger than you. Look at the fact that you’re taller and have more muscle than he does because, well, you do. Just keep training hard and eating right and your body will be in better shape than you ever dreamed it could be.