You're sitting alone in your living room, staring blankly at the
wall. A crashing wave of panic is closing in, threatening to engulf
you at any minute.

The worst part is, you can't put your finger on just what's
brought it on. Is it the ten grand you owe the mob? Nah, that's not
it.

Maybe it's that chick you picked up last month, who just called
to inform you that she's two weeks "late?" No, not that
either.

Or perhaps it's the fact that those little red sores are getting
bigger, and it hurts when you pee? Nope, not even
close.

I'll tell you what it is, bucko. You have an acute case of lower-body anxiety.

Training camp is starting in five weeks and you've spent the
majority of your spring and summer training to look good on the
beach. As a result, you now have the chest and arms of a silverback
gorilla, but the thighs and calves of a pink
flamingo.

And you just know that when they test you on the forty,
or when you have to run through that nasty defensive line, you're
likely gonna be in for a very unpleasant surprise. Maybe you'll
lose your starting position, or even your spot on the team. Then
you can kiss that nice big college scholarship goodbye.

Then it hits you: without your scholarship, you'll have to drop
out of that fancy university. Without a college degree, you'll have
to work the night shift at 7-Eleven, selling Big Gulps and Slurpees
to other losers for the rest of your life.

Okay, maybe I'm exaggerating a little, but in my many
years as a coach, I've seen this situation many, many times. For
some reason, whether it be an injury, short-sighted beach-muscle
focus, or just plain laziness, an athlete "forgets" to work on his
lower body during the off-season, then suddenly realizes that he
actually needs decent legs for serious running when the season
starts.

These athletes come up to me at practically the last minute,
desperate for a program that will allow them to start the season on
the right foot, so to speak.

So here's the program I give them. Yes, it's brutal, hellish,
cruel, and unusual. Yes, you'll curse my name for hours on end. I
don't mind. Do this program, and it'll get you in playing shape
faster than anything else you can do.

Understand, though, that this is only a quick fix: an emergency solution, and not part of a properly
planned long-term program.

An athlete needs lower body strength, strength-speed,
speed-strength, speed, and reactive strength. Ideally, you have a
longer time to train, and are able to focus on each of these at a
time, thereby maximizing them all.

However, with only 3-5 weeks to get ready, we don't have that
luxury, so we have no choice but to do everything at once. Luckily,
there's an effective way to do this: the strength spectrum
circuit.

This approach will build strength, power, and speed, while
improving your work capacity, conditioning, and overall general
physical preparedness. And, if youÕre a bodybuilder and
youÕve never done training like this before, itÕll also
beef you up.

The first lower body session is hip-dominant, while the second
one is quadriceps-dominant. Both include 5 or 6 exercises,
performed in the form of a circuit (one set of each, before
repeating a second and third time). 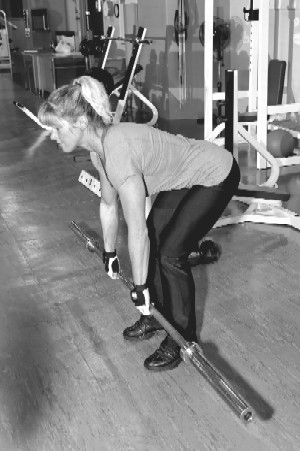 Key coaching point: push the hips as far back as possible
when you lower the bar, to stretch the hamstrings

75 seconds of rest before moving on to A2.

A2) Power Snatch From Blocks 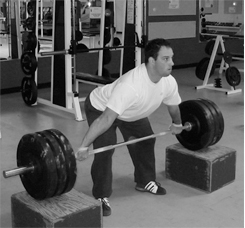 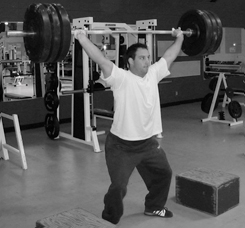 No emphasis on eccentric (just don't drop the bar on the
blocks), explosive concentric/lifting

Key coaching points: Think "beach position" (always keep
chest out and lower back arched), and jump! Keep the bar as
close to the body as possible at all times during the
lift.

75 seconds of rest before moving on to A3.

60 seconds of rest before moving on to A4. 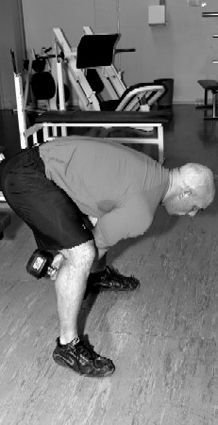 Key coaching points: aim for as much acceleration as
possible. Focus on achieving full ankle, knee, and hip extension at
the top.

Key coaching points: use 20-30% of your body weight.
Switch legs in the air.

60 seconds of rest before moving on to A6.

Key coaching points: focus on length (hip-dominant) not
height (quad-dominant). Spend as little time as you can on the
ground between jumps.

2 minutes of rest before restarting the circuit

A1) Olympic Style Back Squat 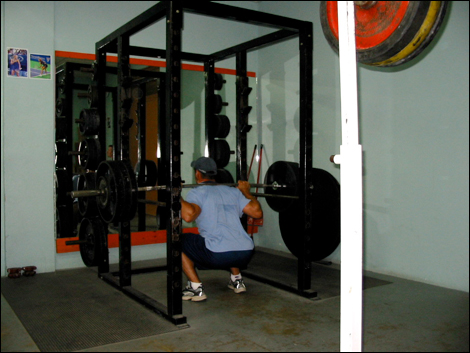 90 seconds of rest before moving on to A2.

A2) Power Clean from the Hang 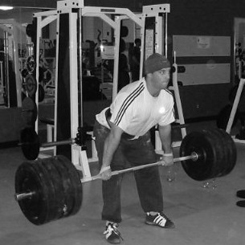 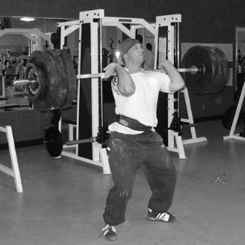 Rapidly lower the bar to the knees, and immediately explode
upward

90 seconds of rest before moving on to A3. 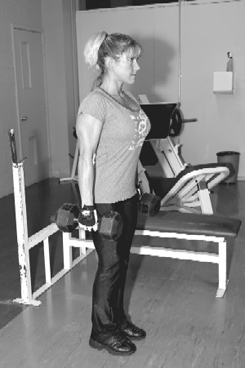 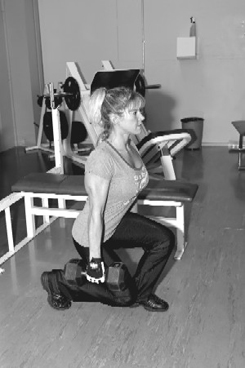 Key coaching points: the back knee should be in line with
the front heel in the low position. Bring the back knee as close to
the ground as possible, without touching it.

75 seconds of rest before moving on to A4. 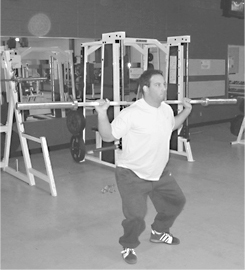 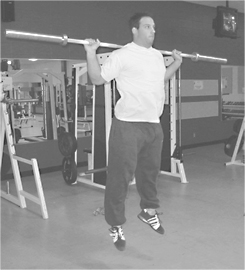 Key coaching points: use 20-30% of your max full squat.
Focus on jumping height, but try to spend as little time as
possible on the ground. 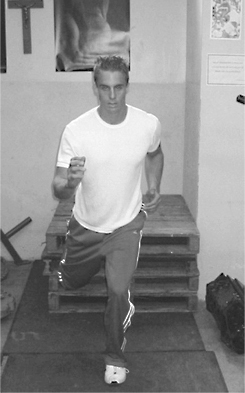 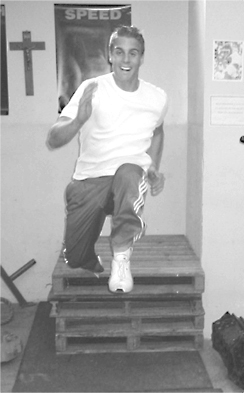 Rapid eccentric before jumping up as fast as
possible

Key coaching points: the focus should be on bringing the
knee up to the chest with as much speed as possible. The back leg
stays on the block. Minimal ground contact time.

Do this lower body cycle for a period of 3 to 4 weeks and you'll
significantly improve most facets involved in optimal athletic
performance. It won't make you a super-stud in all of these facets,
but at least you won't embarrass yourself in front of the
linebackers and cheerleaders, you can save your scholarship, and
you'll keep your future reasonably Slurpee-free.

In other words, if you desperately need to bring up your lower
body in a hurry, this is your best, and perhaps only option.

The relatively short rest intervals (which I wouldn't recommend
under normal circumstances) will also help get you into athletic
playing shape, while developing your capacity to maintain a high
level of power output even in a fatigued state.

So if you're floundering in the roiling waves of lower body
anxiety, here's your life jacket. But next year, be serious.
Concentrate on your lower body from the start. 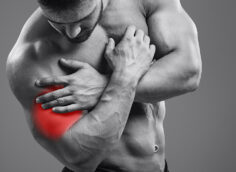 Injuries kill workout consistency. Avoid these high-risk exercises and replace them with smart moves that are even more effective.
It Hurts Fix It
Nick Tumminello November 28

When I first approached corrective and performance exercise specialist Paul Chek about writing for Testosterone, his first concern was whether I'd choose to soft-peddle his article. In other words, he was worried that I'd try to "dumb down" his material.
Training
Paul Chek August 4