Partial reps have gotten a bad rap. Most lifters have accepted the numerous studies showing that full squats result in greater muscle activation than partials, but by avoiding partial rep training entirely they've effectively thrown the baby out with the bathwater.

This article will address partials and relevant research exploring the underappreciated benefits of supramaximal training in general and then describe ways that strength athletes and bodybuilders can use these methods to enhance their strength, muscularity, and body composition.

Powerlifters often use supramaximal methods primarily for a psychological edge, reasoning that if you get used to the feel of extremely heavy loads on your back or in your hands, maximal attempts won't feel nearly as intimidating. And as we all know, confidence under the bar is paramount.

Regardless of the rationale taken for employing supramaximal lifts, powerlifters often use reverse band lifts to do so. To set up reverse band lifts for squats, benches, or deadlifts, simply attach the bands to the top of the power rack and to the bar. This makes it so that you're handling almost all the weight at the top of a lift, but as you squat down or lower the bar, the bands take progressively more load.

The result is you end up using weights heavier than you could normally handle through a full range of motion because the bands make the load manageable through the most difficult part of the lift.

Reverse band lifts are superior to partial lifts in my opinion because you receive the benefits of both partials and full range of motion (ROM) lifting.

Here's a simple way to implement reverse band training, which is especially useful if you feel you've stopped making progress simply because you're intimidated by a certain weight.

Use reverse bands to handle that weight – or more – every time you train the lift. Let's say your typical squat workout looks this:

To add reverse bands into the mix, add the bands to your last working set and progress in the following way:

The amount the bands help depends largely on which bands you use, the height of your squat rack, and how tall you are. As a ballpark though, heavy bands assist about 150 pounds at the bottom, average bands 100 pounds, and light bands 50 pounds.

In the example given, average bands would probably be perfect. The load on the last set would be easily manageable (about 325 pounds, or about 85%, very doable for a single), but will still let the lifter get used to feeling and handling 425 pounds.

This serves two purposes: it gets him used to seeing four plates on the bar, and it lets him reframe the feeling of handling that weight from one of imminent failure to one of anticipated success.

In the previous example, the 385-pound squatter might use 75 pounds of chains set so they're completely off the ground at the top of the lift and on the ground at the bottom. A bar weight of 330 pounds plus the chain weight would still get the lifter used to feeling 405 and build confidence unracking the bar.

However, if you don't have bands or chains (maybe you should switch gyms?) you still have partials, both progressive ROM and fixed ROM.

For progressive ROM, use a weight that's 20-100 pounds heavier than your max (lower increments for bench and press, higher increments for squat and deadlift). Start with a very short range of motion, using pins for the squat, pins or boards for bench, and pins or blocks for deadlift.

Then every week or two, increase your ROM slightly, either by moving the pins down, using fewer boards, or using shorter blocks. Do as many reps as you can at each height, and try to equal your rep count with each downward increment. You'll lose reps as the ROM increases, but that's expected. Once you're back down to a full ROM, you should be set for a sizeable PR.

This method was popularized by Paul Anderson, one of the strongest squatters and pressers ever, and has been used successfully by lifters ever since.

Anderson recommended progressive ROM training be done every day, with the height lowered every three days. However, it can also be implemented once per week as a second training day for a lift, with full-ROM work on the other day. Here you'd go down in height every 2-3 weeks instead.

Fixed ROM is applied similarly to reverse band work. After your work sets for a lift, set the pins to the desired height (usually a quarter to a half your typical range of motion squat) and work up in weight from there.

For a quarter squat, it's not uncommon to be able to use 50%+ more weight than you can squat for a full ROM, but be careful when you start. Build up slowly, even if it doesn't feel challenging at first.

Finally, if you don't have a power rack (seriously, you need to change gyms!) static holds can work just fine. For the squat, unrack the bar with about 120% of your max and simply stand with it for 3 sets of 8 seconds without locking your hips or knees.

Ditto for bench – hold it at arms' length with a very slight bend in your elbows. These can also be used for deadlift as long as you have straps or a superhuman grip.

These may sound easy or lame compared to the earlier options, but trust me, they aren't. Fred Hatfield has recommended a few sets of static holds after heavy squat and bench work, and his lifts speak for themselves. 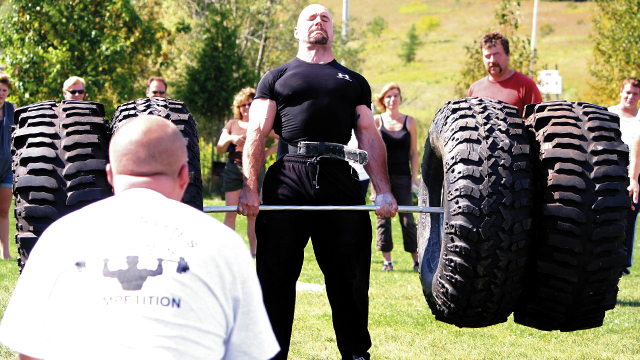 Strongman training makes ample use of three supramaximal lifting techniques: partial deadlifts, frame carries, and yoke walks. Most lifters can implement two of these, even if you don't plan on competing in the World's Strongest Man contest any time soon.

Partial deadlifts are typically performed off blocks or pins. Blocks are probably the most user-friendly since the weights still roll like normal, but pins work just fine.

There are two general approaches to deadlift partials, either working up to a max that's much heavier than you could deadlift from the ground, or pulling reps with a weight near or above your current full-range max. Both condition the body to handle heavier weights, build grip strength, and develop an enviable yoke.

Yoke walks are more difficult for many typical gym-goers, typically due to lack of equipment. However, with a little ingenuity, one can approximate the effect.

Set the pins in a power rack so that you only have to move the bar 3-4 inches. After standing up under the bar, carefully alternate lifting one foot, then the other, almost like marching in place. Make absolutely sure that you do not lock the knee of the down foot.

I'd recommend against applying these as supramaximal lifts the same way strongmen do for safety reasons, but 50-100 "paces" with 50-75% of your max can be a fantastic finisher for your upper back, abs, and hips.

If you have access to a yoke, however, load it up with absurdly heavy weight and revel that you train at an exceptionally well-equipped gym.

Frame carries are another example of a strongman lift that most people can approximate as long as they have a trap bar and a little space to move. Load the trap bar up heavy with the weight resting on blocks or a few plates to elevate it.

From there, just pick it up and walk with it, much like a farmer's walk. However, since the weights can't roll in your hands, you can use much heavier loads than what farmer's walks allow.

For a supramaximal load for your hands, yoke, hips, and core musculature, use 100%+ of your deadlift max and try to make it 30 yards, increasing weight as you can. Longer distances and lighter weights can be used for functional hypertrophy work and a huge yoke.

Powerlifting-inspired supramaximal training still hasn't caught on in bodybuilding, though shortened ROM lifting is routinely used to great effect. John Meadows has written extensively for T Nation about how the same techniques powerlifters use to up their 1RM can be used by bodybuilders for new muscle growth. If you're in a size slump and haven't checked out Meadows' work, I suggest doing so.

The key for applying supramaximal training to bodybuilding is maximizing muscle tension throughout the entire range of motion. The technical term for it is accommodating resistance. Certain lifts have wonky strength curves where you're very weak through one part of it, but much stronger as your leverages improve.

A prime example is the bench press. If you can bench 300 pounds for 6-8 reps, it only means you can move 300 pounds through the weakest part of the lift 6-8 times. But maybe you could move 350 through just the top half of the lift, or even 400 if you were only locking the weight out?

That means by sticking with just 300 pounds of straight weight you might fatigue your chest and front delts, but you'll likely be missing out on some bonus triceps work as the lockout will be a breeze.

To get around this, you could load 400 pounds on the bar with reverse bands, or add some chains to 275-300 pounds of bar weight. I realize that this doesn't count as true supramaximal training, but it does allow you to use significantly heavier weights for a stronger growth stimulus while still staying in a more hypertrophy-inducing rep range.

It also helps keep your joints healthier, since the weights are slightly lighter at the bottom of the lift where injuries most often occur. Almost any barbell pressing variation can work with accommodating resistance, as do squats, triceps extensions, and deadlifts (Romanian deadlifts especially).

Other lifts simply provide a better growth stimulus when you shorten the range of motion. If you watch most pro bodybuilders perform pull-ups or pulldowns, you typically see the bar reach their forehead or maybe their chin. Chest-to-bar may be a good rule of thumb for scapular stabilization, but removing the weakest part of the ROM (while still maintaining good form, obviously) lets you use more weight and build some wings.

Rack pulls are another example. Although full range of motion deadlifts are great for overall hypertrophy, they don't hold a candle to rack pulls from just below the knee for packing mass onto your upper back.

Finally, the shoulder press, especially if performed behind the head, can be done safer and with heavier loads by shaving a few inches off the bottom and stopping at eye level instead of chin or neck level.

Get Partial to Partials

Whether you want to add some muscle to your frame, put another 50 pounds on your maxes, or minimize body fat gain while bulking, you could probably benefit from incorporating supramaximal lifts into your routine.

Provided you choose the appropriate ways to implement these techniques, they can help you in your pursuit of any strength or physique goal.