So in an attempt to hop on the glute training bandwagon, you've started doing glute-ham raises religiously on lower body days.

It's a difficult exercise, it looks hard-core, and it has the word "glute" in its name. Sage move, grasshopper. Might as well start writing your acceptance speech for "Most Improved Backside" today.

Not so fast, brother.

Most lifters know that the hamstrings have two primary roles – to extend the hip and flex the knee. Some even know the roles of the gluteus maximus, including hip extension, hip abduction, hip external rotation, and posterior pelvic tilt.

However, despite this knowledge, the majority of lifters can't break down the biomechanics of the glute-ham raise and objectively determine its primary purpose.

The first problem with the glute-ham raise is the name. Most lifters can't objectively analyze an exercise if the exercise's name is misleading.

Case in point, back extensions. Flex and extend the spine with the pad at your navel and it's indeed a back extension, which targets the erectors dynamically and the hip extensors statically.

But place the pad at upper thigh-level and flex and extend the hips while keeping the core stiff and now it's a hip extension exercise that works the erectors statically and the hip extensors dynamically.

Back to the glute-ham raise – this is another example of a confusing name. Put the word "glute" in the title and you somehow dupe an entire industry for forty years!

Though European athletes had been performing the movement since the turn of the 20th century, most Americans first learned of the glute ham raise through a 1971 Strength and Health magazine article where Russian weightlifters were performing the movement on a pommel horse in front of wooden stall bars. Later came the various exercise apparatuses such as the glute-ham developer and the poor man's glute-ham.

I've seen all kinds of names for the exercise over the years and many ways to perform it.

Usually these are intended to be initiated from a 90° hips-flexed position by way of an initial hip extension motion followed by a knee flexion motion that ends in a 90° knee-flexed position.

Then you have the shortened motion glute-ham raise, which is also performed off a glute-ham developer but eliminates the initial hip extension motion, so you're only lowering down until the torso is parallel to the floor.

These typically involve kneeling on a pad and lowering under control while the ankles are held in place by a partner, a lat pulldown apparatus, a sit-up apparatus, a loaded barbell, a poor man's glute-ham apparatus, or any other immovable object you can think of using.

These are all amazing hamstring exercises, but guess what? They're all lousy glute exercises.

If you consult the literature, you'll find a couple studies that show that the glute-ham raise and Russian leg curl are both great hamstring exercises.

The next best thing is to examine the results that I got when I conducted my own EMG experiments on myself (I own an Elitefts Glute-Ham Developer).

Here's what I found, normalized to MVC:

To compensate for this, you can use bands or hold onto a dumbbell to increase the challenge on the glutes as well as the hamstrings. Holding onto a dumbbell is the best method for targeting the glutes, but bands appear to have the edge in terms of hamstring activity.

If your knees are near the very top of the pad of the glute-ham developer, then the exercise is highly similar to the Russian leg curl, both in kinematics and kinetics.

Back to the chart. Check out the levels of hamstring activation. Pretty impressive. Now look at the levels of glute activation. The highest activity you get is when holding a 50-pound dumbbell on the glute-ham developer with the knees positioned far away from the pad.

Furthermore, if you think about it, all the glutes are doing in the glute ham raise are contracting isometrically to stabilize the torso. Dynamic contractions are better for muscle growth and strength compared to static contractions.

With the hip thrust, you get much higher mean and peak activation compared to the glute-ham raise, plus you get a dynamic muscle contraction with a concentric, isometric, and eccentric component.

If this isn't enough evidence for you that the glute-ham raise isn't much of a glute exercise, then maybe the next section will change your mind.

For the following calculations, I'll consider a model of a Russian leg curl performed off a poor man's glute-ham from Sorinex as it allows for simpler calculations due to the segments being parallel with the ground at the bottom of the movement.

And I'll assume that the lifter is strong enough to be able to curl himself upward by himself without any push-up assistance, which is actually quite a generous assumption because most guys can't. But I'll be nice for argument's sake.

Let's say you have a six foot, 220-pound male of normal proportions. We need to examine the superincumbent bodyweight; that is, the portion of the body directly acting on the joint in question.

Now let's add in the hips and thighs as this will act on the knee joint. His head, arms, trunk, hips, and thighs will weigh around 88 kgs (194 pounds, or 863 Newtons).

By the way, I'm using data from Plagenhoef, et al., 1983, and de Leva, 1996, to formulate my estimations, and these articles also allow for the estimation of the center of mass of the collective segments in question.

To calculate the hip extension torque at the bottom of the ROM, we must multiply the lever length by the load. So (637 Newtons) x (.4 meters) gives us 255 Nm of torque at the hips, which is borne primarily upon the glutes and hamstrings.

To calculate the knee flexion torque at the bottom of the ROM, multiply (863 Newtons) by (.6 meters) which gives us 518 Nm of torque at the knees, which is borne upon the hamstrings and gastrocs.

Athletes tend to have around 60-85% more hip extension torque capacity than knee flexion torque capacity (Poulmedis 1985, Smith, et al. 1981). So in the Russian leg curl, you're getting 203% more joint torque at the knee compared to the hip, but the hip is 60-85% stronger in extension than the knee is in flexion. As you can see, the Russian leg curl is a hamstring dominant exercise.

Still not convinced that the glute-ham raise isn't a good glute exercise? Then maybe the next section will finally convince you.

Earlier I discussed how the glute-ham raise simply involved a static glute contraction.

Think about it. If you take the knee-flexion component out of the glute-ham raise and just held an isometric back extension for time, you could probably hold it for 60 seconds, if needed. Obviously knee-placement would matter, and if the knees were on top of the pad it would be more challenging.

Nevertheless, the horizontal back extension iso-hold off the glute-ham developer would be an endurance event, not a strength or power event.

Furthermore, most of my clients can bust out 50 reps on the back extension with their bodyweight. Some can do 100 reps. Again, an endurance event. But the back extension (should be called hip extension) is a better glute exercise than the glute ham raise for several reasons.

The glute-ham raise and Russian leg curl are ass kickers in a figurative sense, but in a literal sense? Not so much.

They're amazing hamstring exercises, and you should definitely do them from time to time, but they're not very good glute exercises, activating only around 5% mean glute activation when normalized to proper MVC position (which is an isometric quadruped hip extension while contracting your glutes as hard as possible).

If you hold onto a dumbbell and position your knees far away from the glute ham pad, you can get up to around 30% mean glute activation and over 100% peak glute activation. But you can get much higher when performing barbell hip thrusts, or even weighted back extensions.

Author's Note: If this article is right down your alley, please check out Hip Extension Torque: The Scientific Guide to the Posterior Chain. It's filled with explanations, graphs, and charts pertaining to the biomechanics and research involving glutes, hamstrings, squats, deadlifts, split squats, good mornings, back extensions, 45 degree hypers, hip thrusts, kettlebell swings, and much more. 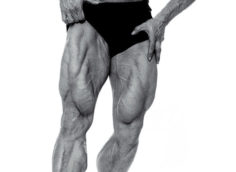 Add this to the end of your next leg day to blow up your quadriceps. Warning: It's gonna hurt.
Bodybuilding, Legs, Tips, Training
T Nation January 12

Tension builds muscle and this variation provides a lot of tension on the pecs. Be sure the dumbbell held at the bottom doesn't rest against the body.
Bodybuilding, Chest, Exercise Coaching, Tips
Drew Murphy September 18