I used to spend most of my time using heavy weights, or at least what I considered heavy weights. But then lockdowns hit, and things changed. For the first time in my life, I built a home gym.

Oddly enough, it freed me. I no longer was subject to the scrutiny of the mob. I didn't have to use heavy weights all the time because I was worried about someone from the gym recognizing me and saying, "Hey, look at that moron over there using the Fisher Price 'Laugh and Learn Countin' Reps Dumbbell Rattles' (for toddlers from 6 to 36 months). That's TC! Wait 'til I get on social media and mock him mercilessly and try to destroy his credibility and his career."

It was immature on my part to even give a damn. I'll cop to that. Regardless, the freedom from worrying about looking stupid or weak by having a home gym was liberating.

It's weird when a writer in the fitness/bodybuilding game writes about which exercise, exercise program, or set/rep ranges works best for them. Each of us has only one body from which to draw experience, so someone's best exercise for glutes might be someone else's worst. What I feel in my biceps, you might feel in your anterior delts. And so on.

It reminds me of Tiresias in Greek Mythology. He was a man who, like my Uncle Chuck, was turned into a woman – not by paying $100,000 to a clinic in Zurich, but by the goddess Hera after wounding a pair of mating snakes. Tiresias knew better than anyone what it was like to have had a penis and a vagina, to know what it was like to bone someone and be boned by someone.

So, unless you're some sort of weightlifting version of Tiresias who had the benefit of drawing experience from another physical form, another body, how the heck do I/you know what worked the best for you/me is going to work the best for the random Tom, Dick, Harry, or Meat?

Then there's what I call the "deceptive big body part principle." It has to do with when guys/girls with some particularly well-sculpted body part, whether it be their pecs, biceps, glutes, calves, etc., are judged to be experts on that body part.

But far more often than not, someone has big calves for the same reason someone has a big schlong – genetic propensities. In the case of big calves, they got a heavy dose of a few specific genes from one or both of their parents that instructed their cellular mRNA and tRNA to keep piling the amino acids onto the muscle scaffolding of their emerging fetal calf muscles and probably not because they do farmer's walks on their tippy toes.

So why the hell do we listen to these people? Their experiences don't necessarily apply to us.

As far as well-designed scientific studies about what causes muscle growth, they can give us some guidelines about what works for most of us. But their findings are often confounded by a host of circumstances ranging from age, sex, and experience to maybe something unimagined, like maybe people with big, hairy Hobbit feet are better at squatting than people with little Elf feet.

However, it's a safe bet that SOME people have similar experiences to the writer of an article on lifting (or a participant in a study). In my case, maybe my experiences are applicable to you because our long lever arms are close in size, our muscle fiber proportions are similar, or our nervous systems are tuned similarly.

The same is true of studies. The only way to know is to experiment.

It's with those people in mind that I offer the suggestions in this article. But even if our physical similarities end with both of us being bipedal and having a fondness for boiled potatoes, the overall principle of lifting lighter weights to grow muscle espoused here may apply to you, too.

Now I know the standard philosophy has always been "lift heavy or go home," but that appears to be true only if you're trying to get appreciably stronger because it's part of your sport, you're preparing for the zombie apocalypse, you're woefully insecure, or it helps you in your afterschool job of hoisting sacks of manure onto a truck.

William Kraemer, the Duke Kahanamoku of modern weightlifting theory, stressed in his landmark 2004 paper that using high loads was absolutely necessary so that we could recruit the max number of muscle motor units and thus fully realize a muscle's growth potential.

Others thought that lifting heavy caused tsunamis of growth hormone and testosterone to be released, both of which would work in concert to nurture muscles. Unfortunately, that's happy horseshit.

As I've stressed innumerable times before, just about anything, even hitting your head with a hammer, releases growth hormone (GH). The key to GH-induced growth is sustained and supranatural increases of the hormone – not a short-lived little duck snort. The same is true of testosterone. While heavy weights might induce a post-workout surge, you need a sustained surge for it to have any growth benefits.

Anyhow, most of us grew up embracing Kraemer's go heavy or go home dictum, but more recent studies have thrown some shade on that theory. Now I realize that I just finished talking about how studies are prone to confounding factors, but when enough studies come up with the same conclusions, you think maybe that the nerds are onto something.

Specifically, new studies show that training to failure or near failure is more important to muscle growth (not strength) than using heavy weights. Doing as many reps as you can, even with light resistance, ends up recruiting just as many or nearly as many motor units as lifting heavy does, so "lift heavy or go home" no longer has to be the rule of the realm.

Instead, there's no need to go home – just train to failure and maybe hang around afterward for a nice mango and whey shake.

Schoenfeld and his colleagues found that doing 25 to 35 reps to failure (which requires muy light weights) worked as well as doing 8 to 12 reps to failure... except in the biceps, where high rep training worked better, increasing the biceps size of participants by 8.6% compared to the 5.3% realized by those who performed low(er) rep/heavier weight training.

Another study, this one conducted by Robert Morton and his colleagues (2016), found that doing high reps (20-25) with light weights (again to failure) worked as well as doing 8-12 reps to failure. Their theory? Volume (reps times weight) can be as important as intensity (percentage of 1RM).

And, if you want to throw another study into the pile, Kumar and his colleagues experimented with exercise intensities of 20, 40, 60, 75, and 90% and found that 60% of 1RM was the magic number, stimulating protein synthesis to a greater degree than any other percentage.

But figuring out percentages requires that you first determine your 1RM on every single goddam lift and then doing some cipherin' to figure out how much weight to use. And hardly anyone is going to go to all that trouble.

My recommendation, at least to anyone with a few months/years of lifting experience, is to pick a higher rep range and use your instincts to pick the corresponding weight. It may take you one or two sets to get it right, but it's quicker than figuring out your 1RM's on all your lifts.

There are several reasons why you might consider giving light(er) weights a go:

1 A better chance of hitting the muscle bullseye

Whenever you lift heavy, your chances of isolating the intended muscle diminish. It's a freakin' heavy weight, so the muscles of your body work in coordination to move the sucker. A prime example involves biceps curls. Really, when was the last time you saw someone doing them correctly, doing them without leaning forward and then using the erector muscles in their back to Bezos or Musk the payload/weight into low orbit?

The last place they feel it is in their biceps. That's probably why that study by Schoenfeld et al. described above showed that light weights caused biceps to grow more than heavy weights.

It's much the same when doing bench press for chest – the heavier you go, the more it turns into a triceps workout.

Using light(er) weights allows the target muscles to do the bulk of the work. Can't feel your back when you do almost any back exercise? Slap on a weight that allows you to do 15, 20, or even 25 reps; you'll absolutely feel the back muscles fire up and pump up.

2 Using heavy weights all the time erodes you

Using heavy weights for most of your workouts, especially when done to failure, turns your body into a pepper grinder. Shoulder, knee, and hip joints get worn down to the nub. Tendons fray. Cartilage emulsifies. You make Rice Krispies noises when you get up, and pieces of you fall out of your pant leg as you walk away from the squat rack.

But light weights? Knock yourself out. No damage... except to muscle fibers, which is, of course, what you want.

It's possible that some of the success me and others have had with high rep, low load training can be attributed to the "novelty effect."

When you keep doing the same exercises in the same order, for the same number of reps, using the same handgrip or foot stance, the body adapts. The nervous system becomes "hardwired" to that particular routine, and consequently, fewer muscle fibers are recruited, less energy is used, and fewer demands in general are made on the body.

You become an expert at that routine, and after a surprisingly short time, you stop making progress. If, however, you introduce a novel stimulus, like using high reps and lower load, you slap your somnolescent body on the ass and force it to grow stronger and bigger to survive the onslaught.

Even if the effects of lifting lighter are due in part to the novelty effect, it doesn't diminish my case at all. Instead, it gives us another reason to periodize our training, using periods of using higher reps/lower loads – done to failure or near failure – as a physiological sorbet to cleanse and prime the nervous system for the next bout of lifting heavy.

Just because everyone does them doesn't mean they're optimal for you. It's time we reevaluate these 6 popular movements.
Bodybuilding, Training
Charles Staley December 6

Learning this Olympic lifting staple isn't nearly as hard as it looks, you just need a simple step-by-step approach like this.
Training
Jon-Erik Kawamoto May 15 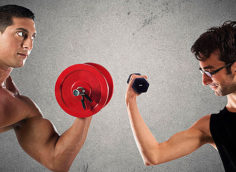 Aside from their deficiency in bodybuilding drugs, most natty lifters make two training mistakes. Here's how to fix them.
Bodybuilding, Tips, Training
Eric Bach July 14