Some 50 years ago, I had a Texas training buddy by the name of Stuart Coyle. At a little over 6-feet tall and a body weight of 200 pounds, Stu was well built — but he had below-average calves. They weren't a couple of broomsticks; they just needed some size and shape.

He had worked his calves as hard as the rest of his body, but they just didn't seem to respond as well. Stu was determined to get his calves to grow, so he recruited me to help him with a strategy.

But first, we both needed some inspiration.

"I want those inner-calf peaks," Stu said, "muscular calves shaped like Ron Lacy's. I want his diamond-Ts." Stu was pointing at Lacy on the cover of a back issue of Strength & Health.

"What do you mean by diamond-Ts?" I asked Stu.

"From the front side or the backside," Stu replied, "take a Sharpie marker and run vertical lines, around his calf, from his knee to ankle. Then, cross that line horizontally in the middle. From there, imagine parallel lines connecting the end points. The result is a diamond shape with a cross or 'T' in the middle. I want my calf muscles to project diamond-Ts."

"Wow, Stu," I replied. "That's a great description of the shape and size of championship calves."

Ron Lacy had won the 1957 AAU Mr. America. His calves certainly had pronounced peaks — diamond shapes — in the middle of his lower legs.

We looked through dozens of magazines and ear-marked anything related to calf development. We ended up with four articles that captured our interest.

One featured Lacy and discussed how he had failed to get into the top-five of the Mr. America contest in the mid-1950s. What did he do? He packed his bag and spent the summer in California training harder than ever. Whatever he did, he turned the judges in his favor, and he won the 1957 competition.

"But Stu," I answered, "we can't spend the summer in California."

"Yeah, I know that," replied Stu. "But we can hit our calves this summer and turn them into our own diamond-Ts."

"Okay, Stu, I hear what you're saying," I chimed back. "But we need a routine to follow."

We went back through our muscle magazine articles until we settled on a routine that claimed you could add 1-1/2 inches to each calf in two months. The routine was reported by Jim McLellan in the September 1971 issue of Iron Man magazine.

McLellan's contention — 1-1/2 inches on the circumference of each calf — sounded too good to be true. Stu and I both decided that half that amount — 3/4 of an inch — would be our goal. Instead of two months, we'd try it for one month. Anything more than that would make our calves too big, right?

McLellan's workout, however, sounded truthful because it involved some concepts we had heard about: rest-pause, burns, and negative-accentuated.

Stu and I both made a commitment to each other: Monday-Wednesday-Friday calf workouts... for four consecutive weeks.

A lot of muscle-building experts believe that because you use calves walking every day, they need higher reps to stimulate growth. I never placed much faith in that... until I experienced this routine. It involved doing approximately 100 repetitions of calf raise for two, unique, extended sets.

The extended sets are not for the weak-at-heart. During the first week, you won't be walking — you'll be hobbling.

All you'll need for the calf portion of the workout is a standing calf-raise machine. If you don't have access to a calf-raise machine, you can use a barbell inside a power rack, with plates or a block of wood for a step.

Repeat the calf routine three times a week for four weeks, which is 12 times in 28 days. Make sure to begin each training session with the diamond-T extended sets, followed by two-minutes' rest before moving on to the other exercises in your workout.

I recommend training the whole body, consisting of two other leg exercises, followed by four upper-body movements — each for a single set of 8 to 12 reps. That's it!

Below is the exact calf routine Stu and I followed:

Choose a weight that allows 15 full-range calf repetitions on the standing calf-raise machine. Do the repetitions in very strict form: up on your toes as high as possible, until the muscle almost cramps, then down slowly into a deep stretch. Don't hurry these movements, focus on each one.

While still in the machine, stand on one foot and lift the other foot and shake it to help relax the calf. Do the same for the other foot. Then, back to the first, and back to the second. The rest-relax cycle involves two quick shakes for each calf, and once you get the hang of it, all the shakes should take only a total of 6 seconds.

Up again on both feet and do 8 repetitions of the calf raise; then, another round of rest-relax calf shakes just like before.

Do 8 more reps and the same calf shakes.

Complete a final set of 8 repetitions, but NO shakes. Immediately, with no rest, go into the "burns" stage.

Perform short-range movements near the contracted (top) position for as long as you can stand it, usually 15 to 20 seconds. But that's not all, there's a final phase.

Get into the top position with both calves and while in the contracted position, take one foot off the block and slowly lower with only one calf, which is called negative-accentuated style. Then, up with two and down with the other. Depending on what you can tolerate, continue for 5 to 10 reps of each leg.

Sit and massage your calves for two minutes before you repeat the entire extended set again, performed exactly the same except it's okay to move a little faster during the second cycle.

Rest for 2 minutes, then repeat the entire set a second time with faster reps.

Rest for 2 minutes and do your remaining workout.

Stu and I stuck to our commitment. We did the routine 12 times in 28 days.

And let me tell you, we both experienced some terrific calf pains and pumps.

At the end of the fourth week, measurements showed we had added 3/4 inch to each of our calves.

We each had earned a pair of calves much closer to the diamond-Ts of our inspiration, Ron Lacy. We were both pleased.

Ron Lacy passed away in 2005. But his shapely calves are still remembered, and still admired, by a couple of old-school, Texas bodybuilders.

In June of 2006, I challenged T Nation readers to do a similar calf routine: 6 times in two weeks. Eighteen guys accepted. I have accurate before-and-after measurements that after compiled, showed the average increase in individual calf size was slightly more than 3/8 of an inch.

So it's entirely possible that four weeks will produce diamond-Ts on many of you.

Diamond-Ts require extreme focus and a lot of intense work. Stuart Coyle and I challenge you to treat your calves to something special with this Gold School routine. 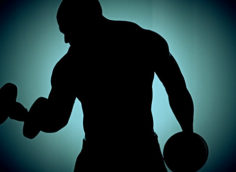 It's been called the stress hormone, the belly fat hormone, and the thief of gains. But it doesn't have to be any of those. Here's how to control it.
Training
Christian Thibaudeau November 22