The most significant impact I've had on strength and conditioning involves the goblet squat and starts with a story:

The Goblet Squat Fixes All

Years ago, faced with 400 athletes who couldn't squat correctly, I attempted move after move, lift after lift, to teach the squat. I failed each and every time.

I saw glimmers of hope from teaching one kid the Zercher squat (weight held in the crooks of the elbows) and a few picked up the pattern when we lifted kettlebells from the ball off the ground (called "potato sack squats" because they look like you're picking up a sack of potatoes off the ground). But nothing was really working.

Somewhere between a Zercher and a potato squat was the answer. It came to me when I was resting between swings with the weight held in front of me like I was holding the Holy Grail. I squatted down from there, pushed my knees out with my elbows and, behold, the goblet squat!

Yes, the squat is that easy. It's a basic human movement; you just have to be reminded how to do it. Remember, squats don't hurt your knees, but how you perform them can.

Squat Between Your Legs!

Let's start simply. Find a place where no one is watching and squat down.

At the bottom, the deepest you can go, push your knees out with your elbows. Relax. Go a bit deeper. Your feet should be flat on the floor.

For most people, this small movement – driving your knees out with your elbows – will simplify the goblet squat and squatting forever.

Next, try this little drill: Stand arms-length from a doorknob (or partner). Grab the handle with both hands and get your chest up. Up! 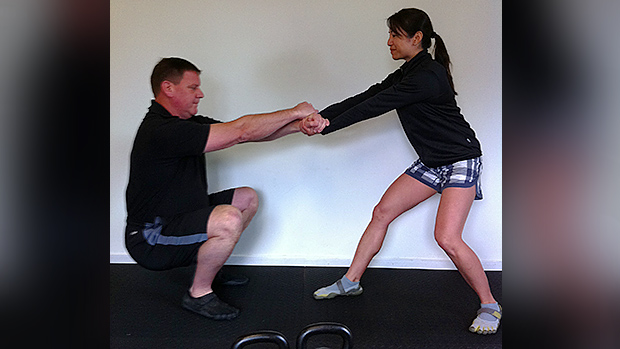 Imagine being on a California beach when a swimsuit model walks by. When an athlete does this, he immediately puffs up the chest, which tightens the lower back and locks the whole upper body. The lats naturally spread a bit and the shoulders come back a little. Now, lower yourself down.

What people discover at this moment is a basic physiological fact: The legs are not stuck like stilts under the torso. Rather, the torso is slung between the legs.

As you go down, leaning back with arms straight, you'll discover one of the true keys of lifting: you squat between your legs. You don't fold and unfold like an accordion; you sink between your legs. Don't just sit and read this. Get up and do it!

Now you're ready to learn the single best lifting movement of all time: the goblet squat.

Now with the weight cradled against your chest, squat down with the goal of having your elbows – which are pointed downward because you're cradling the bell – slide past the inside of your knees. It's okay to have the elbows push the knees out as you descend. 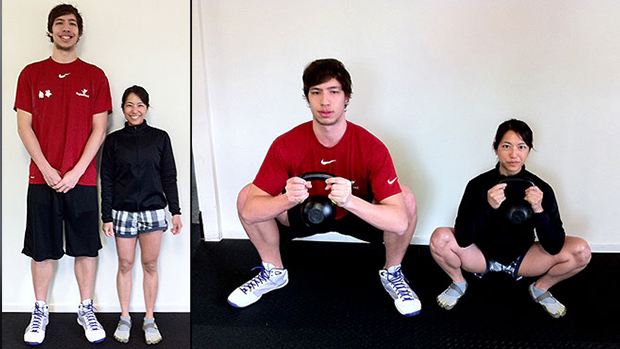 The point? Everyone can goblet squat just fine.

Here's the million-dollar key to learning movements in the gym: Let the body teach the body what to do. Try to keep your brain out of it! Over-thinking a movement often leads to problems, and it's true for the goblet squat. Allow the elbows to glide down by touching the inner knees and good things will happen.

The more an athlete thinks, the more the athlete can find ways to screw things up. Don't believe me? Join a basketball team and get into a crucial situation. Shoot a one-and-one with three seconds to go, down by two points, and get back to me later if you decided thinking was a good idea.

The goblet squat is the only squat most people need. If the bar hurts in back squats (I won't comment), your wrists hurt in front squat (swallowing my tongue here) and the aerobics instructor has banned you from using the step boxes for your one-legged variations, try the goblet squat.

Seriously, once you grab a bell over 100 pounds and do a few sets of 10 of the goblet squat, you might wonder how the toilet got so low the next morning.

Where do you place your feet? Do three consecutive vertical jumps, then look down. This is roughly where you want to place your feet every time you squat. The toes should be out a little. You don't want to go east and west, but you want some toe-out.

This drill, along with the goblet squat, teaches patterning. Unless you already have the pattern, you shouldn't move into heavier work.

From the Goblet Squat to Grinds

Like goblet squat, I also have my athletes do grinding moves called double kettlebell front squat. The load remains in front, forcing the whole core to stay rigid. Moreover, with two bells, you can still have your elbows down to push the knees out.

The double kettlebell front squat is exhausting in an odd way: like wrestling an anaconda, you seem to be slowly choking yourself to death. The pressure is also teaching you to stay tight, but continue to grease up and down.

Also, the double kettlebell front squat seems to really work the upper back in the style I call "compression." It's a forgotten method of muscle and strength building where the constant squeezing of a muscle system is the movement, for lack of a better term.

The goblet squat and the double kettlebell front squat lend themselves to the two greatest workouts I know: the ButtBurner 4000 and the Eagle.

In my last two articles, I introduced these two exercises: the Bulgarian Goat Bag Swing and the Farmers Walk. Let's look at all the fun you can have with these two!

Grab a kettlebell or dumbbell in the 25-60 pound range. Go lighter than you think. Now, do this:

If you just get to fives, that's 15 reps of each exercise. Tens get you 55 each, and a lot of lost breath. It should go without saying but I'll say it anyway: build up on this one slowly.

This combo will revitalize the entire lower body and teach you to really own both patterns (hinge and squat).

The "Eagle" is named after the school's mascot I used to teach at in Utah. It combines the farmer's walk (the basic patterning or teaching tool for loaded carries) with the grinding double kettlebell front squat.

If you can do eight sets of eight reps with this exercise (plus serious farmer walks in between) you are in rare air.

The mistake most trainees make is that they try to move too quickly for complex movements before getting the form down. But greatness resides in those who have the patience to master the patterns first, then add complexity later.

The simple patterns can also make for the most shockingly exhausting workouts. Do the goblet squat and try the ButtBurner 4000 and the Eagle sometime and see the value of simple, hard work.

Curls with kettlebells, how to cluster-train with deadlifts, the truth behind upper and lower abs, new research on how muscle works, and much more.
Training
Bret Contreras February 29 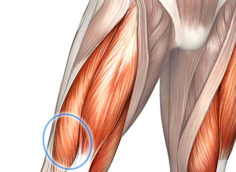 Yes, do your squats. But add in these two moves for all-around strength.
Bodybuilding, Legs, Tips, Training
Nick Tumminello October 19

When it comes to exercise performance, especially the more exotic movements I often prescribe, most people grasp the big picture but miss the finer points. To remedy this, I created this "toolbox" series to help experienced lifters fill in the blanks and newer lifters learn about some very effective exercises. Here's the newest installment!
Training
Dave Tate March 15

Don't worry, you don't have to be a fat man, or even a man, to benefit from this exercise. Here are two ways to ramp it up.
Tips, Training
Ben Bruno September 13