Everyone agrees that deadlifts are awesome. While coaches might have their particular favorites like conventional, sumo, trap bar, single-leg, or Romanian, one thing remains consistent – if a client wants to improve his physique, strength, or athletic performance, it's in his best interest to get acquainted with mean old Mr. Deadlift.

Despite the deadlift's well-deserved popularity, I've encountered many high level coaches and trainers who are downright confused with what's really going on in a deadlift.

Let's get it straight right now. You won't be able to properly program, modify, or tinker with the deadlift if you don't have a clear understanding of what's really going on when a lifter grabs a heavy barbell and stands up with it.

Keep in mind that I'll be talking about a conventional deadlift unless stated otherwise. 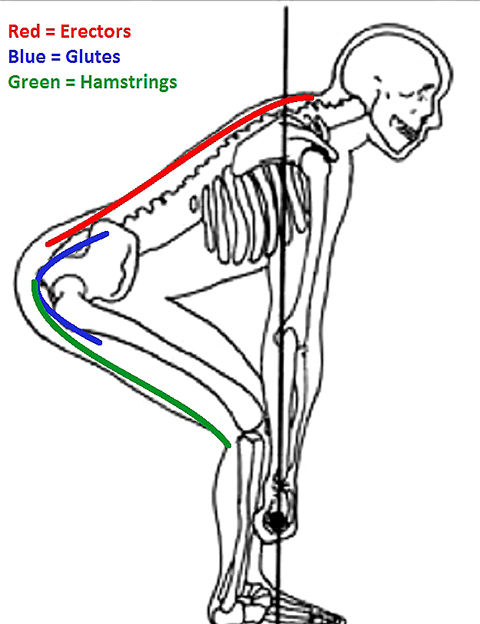 I define the agonist as the most important muscle in the exercise, and the one receiving the strongest training stimulus. In the deadlift, the agonists are the erectors; not the glutes, not the hamstrings, not the quads. Those other muscles are all important, but they're not the agonist.

Some coaches argue that in the deadlift the erectors' primary function is to isometrically hold or stabilize the trunk in position during the lift. I have two responses to this: one, they're wrong, and two, who cares?

Deadlifts involve concentric action (shortening) of the erectors. Disagree? Have a lifter get into deadlift position with a bar at normal deadlift height (8 inches). Take a tape measure and put it at the bottom of the sacrum (the beginning of the thoracolumbar aponeurosis, where the erectors originate). Then go to the base of the neck (C7) and note the distance between the two points.

Now have the lifter deadlift the bar and hold the weight in the top position. Measure the two points again. The distance will be shorter, usually by 2-4" inches on most people.

The erectors aren't simply "engaging in an isometric contraction," they're moving the weight.

To my second point, supposing the erectors were just contracting isometrically; that doesn't necessarily mean that the muscle group has become merely a stabilizer.

For example, the rectus abdominis are antagonistic muscles to the erectors. Most educated lifters know a very important function of the abs is its role in anti-extension, preventing the trunk from hyper-extending when the abs are contracting isometrically as in ab wheel rollouts.

There isn't a strong concentric contraction of the rectus abdominis during rollouts; does that mean the abs aren't the agonist and simply a stabilizer in that exercise? Hardly. Anyone who has challenged themselves on this exercise (say with a weighted vest or staying up on the toes) knows the abs are getting a serious workout. Often, it's too intense for many to perform properly.

Still don't believe me? Look at the levers. The hamstrings' common origin is the ischial tuberosity, found at the very bottom of the pelvis. The glutes originate on the superior gluteal line of the ilium and the sacrum, higher than the hamstrings but still very low on the trunk (below your belly button).

But the insertion point of the erectors is higher up on the trunk, at or higher than the scapula and some sections can even attach to the neck or head. While these muscles are still hip extenders, they aren't as strong in that action due to poor leverage.

Finally, there's the common sense test. Ask any layperson to watch a heavy deadlift being performed and they'll comment that the lifter has a strong back, not strong legs. If someone asks you to give up a Saturday to help them move, are you worried that your legs will be sore the next day or your back? When a person trains heavy on deadlifts it's usually their back that gets fatigued, pumped, and sore.

Charles Poliquin noted that athletes and bodybuilders in the 70's and 80's often had great backs because they deadlifted regularly, something many modern bodybuilders avoid. Ronnie Coleman and Dorian Yates would be notable exceptions; both were fans of heavy deadlifts and both were known for their impressive back development.

Powerlifters have known for decades that the deadlift tests the strength of the back, not the legs. If it tested leg strength, why bother to include it as part of a competition when we already have the squat? But to test near-total body strength with just three exercises, we have the squat for the legs, the bench for the upper body, and the deadlift for the back.

I'm not suggesting that the legs don't work in a deadlift, they do. Those muscles just aren't the agonist.

In this context "synergist" means a muscle that's receiving a training stimulus from the exercise; in other words, it'll grow bigger and stronger and become sore just from performing that exercise. Key synergists in the deadlift include:

The glute max in particular contributes greatly to the deadlift. It can produce hip extension as the femur straightens out and aligns with the body, and it can help the erectors produce trunk extension. The glute max is a very strong muscle and it's in a favorable position in the deadlift when acting at the hip and moving the femur.

The quads contribute to the deadlift by assisting with knee extension, sometimes referred to as leg drive off the ground. Like the glutes, the quads are in a very strong position in the deadlift as the knee is rarely bent more than 70 degrees at the start.

Even though the weight used in a deadlift is often heavy compared to other exercises, if compared to a half or quarter squat (which would mimic the starting position at the hip and knee joint) the weight would be considered light. Thus the glutes and quads are rarely fully taxed when performing the deadlift, which is why they usually don't get fully pumped or completely fatigued during the lift.

All heads of the hamstrings except for the short head of the biceps femoris contribute to a deadlift. The hamstrings produce hip extension and trunk extension along with the glutes, working together to bring the body standing up in a straight line. As most lifters know, straightening the legs while deadlifting will place more emphasis on the hamstrings as they're forced to handle more of the work since the quads can no longer contribute significantly to the exercise.

The traps play an important role in the deadlift and it's common for them to grow in size and strength as a result of deadlifting. In many lifters, deadlifts lead to better trap development than shrugs.

The barbell is attempting to force the shoulder blades into both protraction and forward depression. The traps insert primarily on the scapula and their main roll in the deadlift is acting as an anti-protraction and anti-depression agent as the traps will hold and/or pull the scapula into a retracted position.

The upper and middle traps receive the most stimulus, particularly the thick upper portion that's directly over the bar when the spine of the scapula is in line with the bar. The role of the traps in a deadlift is similar to its role in farmer's walks, another quasi-isometric exercise that delivers great results for these muscles and provides further evidence that some muscles don't need to fully contract concentrically to be adequately trained.

To lift it you need to grip it, and the muscles responsible for grip strength are the forearm flexors. Deadlifting builds isometric or holding grip strength.

This is slightly different from concentric or crushing grip strength demonstrated by closing a Captains of Crush gripper, rolling a frying pan into a taco, or ripping a phone book in half. The two are related, but the principle of specificity states that you get stronger in the range of motion you train in, thus performing holds will generally improve that specific range and won't contribute as much to crushing strength.

We could list other synergists like the adductor magnus, QL, and multifidus, but these aren't the primary muscles doing the work. Of course, the list of stabilizer muscles with a heavy deadlift would be damn near endless.

The big drawback of the single-leg versions is that the erectors, traps, and forearm flexors are significantly under trained because they're lifting far less weight than what they're capable of (assuming 300 to 500 lbs. for most trainees). This lower weight and lower level of muscle activation will also yield a smaller hormonal release, one of the big benefits of the deadlift.

Don't expect single-leg deadlifts to do too much to your deadlift max per se, but treat them as solid assistance exercises for the glutes and hamstrings.

The deadlift is an awesome back exercise. Knowing what you're doing and why you're doing it will always yield better results than simply following a program because somebody else said so. This is no time for the blind to follow (or lead) the blind. Open your eyes, get it straight, and start ripping some weight off the floor.

How to make sweet, sweet, love to a ball and other wonderful lessons learned by Eric Cressey in the past year.
Training
Eric Cressey February 17

Some of your back muscles are functionally shortened. Doing this movement first will get them ready for smooth, heavy lifting.
Tips, Training
Dr John Rusin June 22