I'm the kind of guy who enjoys a good laugh and a good time. Most T-mag readers might find that hard to believe because it seems that I spend so much time answering questions on my T-mag forum, working on articles and books, and training athletes that it doesn't seem possible for me to have a life.

I'll agree that I may not have much free time, but I couldn't live without my daily dose of humor. So I found a brand new way to amuse myself in the gym. I call this activity humiliating the macho wannabes.

Every gym in the world seems to be populated with several macho wannabes, guys who think that they're the living incarnation of motion-picture tough guys (despite quite a bit of visual evidence to the contrary). You know who I'm talking about; guys who act tough in the gym, especially when there are no "real" lifters/bodybuilders around to show them up.

They even "prey" on newcomers by acting superior and having a condescending attitude. In short, I can't stand them!

But I love to put these bozos in their place. Oh, I'm not talking about out lifting them by, what, about a zillion pounds. They know I'm stronger than they are. No, what I'm talking about is a real lesson in humility: I have one of my female figure skaters train at the same time as these guys.

One particular girl is all of 16 years of age. As mentioned, she's a competitive figure skater and not what you'd call a physical beast. However, this gal has something special... in her spare time she also competes in Olympic lifting. As a result she can clean and jerk what most of the macho boys can deadlift and she can power snatch what they bench press. And her deadlift... well, let's just say that the macho boys would probably need to add up their bench press and squat poundage to match her deadlift!

I tell you, seeing the faces on the guys when they see this 5'0" little girl completely destroy them in the gym is worth more to me than winning the lottery. Honestly, this is what I would define as a gigantic, hard and swollen psychological erection!

And you know what makes it worse for these bozos? The girl actually looks very feminine and is extremely pretty. If she were some kind of 240-pound hermaphrodite, the former-macho-now-humiliated men could at least mock her to help themselves recover a little bit of their manhood (funny how insecure guys will always use the most insignificant detail to put you down in hope of bringing themselves back up). But no... we're talking about a pretty, feminine, um... proportioned girl out lifting them by a mile.

In the illustrious words of many popular sportscasters: "Owww, that's gotta hurt!" 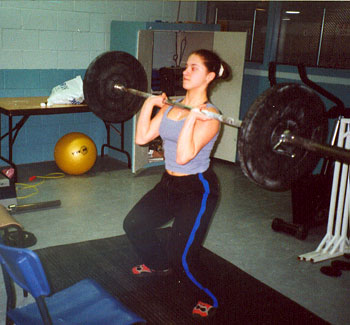 Obviously this girl has a lot of potential and is a great athlete with a thorough sports background. So her performances are understandable. But there's a lesson in there ...women can get strong, muscular, and fit while staying incredibly attractive and feminine. Women should not be afraid of lifting big weights and using typically (and wrongfully believed) male/macho exercises such as the deadlift, squat, clean, jerk, snatch, etc.

In this article (yep, after all this rambling there will be an article!), I'll explain why women are often afraid of what I call serious strength training and why they shouldn't be. I'll also explain the slight differences in planning the training program of female athletes compared to male athletes.

I'm not the biggest fan of feminist extremism; you know, the type who claims that men and women are equal in everything. This just isn't true! Men and women both have different strength and weaknesses as well as different needs. Their respective training program should reflect that.

Why Women are Afraid of Lifting Big Weights

Since the dawn of time, big manly physiques and strength have been bonded together tightly, so much so that many women were led to believe that if they got stronger they'd build a big, bulky, manly physique. Those of us who are slightly more illuminated know that an increase in strength can be associated to neural factors as well as muscular factors. As a result, just because a woman gains a lot of strength doesn't mean that she'll look like Jay Cutler with hooters. Here's why:

First of all, most women have much lower Testosterone levels than men. In fact, they have approximately 10 times less. Since Testosterone is known to increase protein synthesis and muscle size, it seems evident that women would be much less likely to build up huge muscles than their male counterparts when using intense strength training.

I firmly believe that the neural factors involved in strength production are much less developed in female beginners than in male beginners. Probably because, by tradition, young boys are more active. As a result, women will improve this function to a greater extent than men.

That's not to say that women can't build muscular physiques. Just look at the picture below of Patricia Smith who was featured in an earlier issue of T-mag. You'll see a muscular woman who kept a very feminine physique. And the world of athletics is full of such examples. Women can build muscle with training, but not to the extent of their male counterparts.

However, their potential for strength improvement is similar or greater than men's, mostly because of a beginning set-point that's lower than that of men. Trainer Jennifer Blomquist agrees that women can gain strength sometimes at a faster rate then men:

I find this to be true, especially when the women get passed the "I don't want to get huge" mindset and they finally give it their all.

It's obvious that most men have a hard time gaining 15-25 pounds of muscle in a year (in my opinion this size improvement will lead to significantly visible changes). So women should not be too worried about morphing into the Incredible Hulk just yet!

I'd say that a woman could build 7-12lbs of quality muscle tissue in a year (once she's past the beginner level), which will give them a nice firm body! And to quote Patricia Smith:

I do, firmly, believe that most women would look better with the addition of 5-10lbs of LBM anyways. And that the current trend of that too skinny look has just got to go!

Jennifer Blomquist leans distinctly in the same direction when she talks about a woman's fear of getting too big:

I used to tell my female clients that they weren't going to wake up one morning screaming "My God, I went too far at the gym yesterday and now I'm HUGE!!!"

Another fear of women (and their dimwit personal trainers) is getting injured. I don't know why, but most people seem to think that women are more injury prone than their male friends. There is absolutely no data indicating that women are generally more susceptible to weight-training related injuries. We need to take this myth of the frail, fragile woman out to the curb!

However, in recent years we have noted an increase in ACL injuries in female athletes. This may indicate that women may be more prone to ACL injuries (because of the configuration of their hips and legs) or simply that women are now more active and thus the chance of injury is increased. This is yet another good reason to utilize strength training. Strengthening the leg muscles, especially the vastus medialis, will improve knee stability and thus reduce the risk of sport injuries to the knees.

Why Women Should Strength Train

Women can greatly benefit from strength training. Among some benefits we can note: 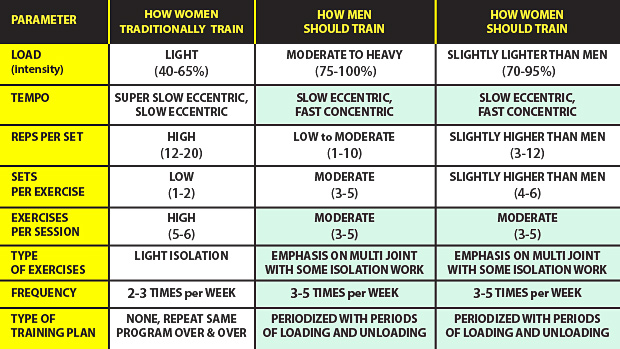 The preceding table gives a good guideline when planning training programs for females. You must understand that women can lift relatively heavy weights, they can do a greater volume of work than believed (in fact they have a greater tolerance for volume then most men), and they should focus on multi-joint exercises.

Basically, women should train almost exactly like men, with a few minor differences:

Editor's note: Photos and information on how to do all those lifts can be found in previous issues of T-mag. Simply type the name of the exercise or movement into the search engine on the home page and follow the links.

I believe that the Olympic lifts have two great benefits for women:

When I started doing the O-lifts, I experienced more joy and motivation about training than I ever had and within a short amount of time my body has never looked or felt better or has been so damn strong!

Women also benefit from doing ballistic work such as throwing medicine balls from various positions and jumping exercises. They should also include exercises for problem areas such as the triceps, glutes, hamstrings, vastus medialis, and abdominals.

There's a French movie called "L'homme parfait est une femme comme les autres" (The perfect man is a woman like any other). We could use the same title for this article: The perfect woman is a man like any other, meaning that when it comes to training, both genders can and should train alike, with a few slight modifications.

Make no mistake about it, those Hollywood celebrity training videos have got to go! 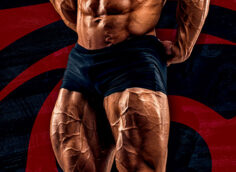 The floor press prevents over-stretching at the shoulder joint and eliminates an excessively stretched pec tendon at the transition point from eccentric to concentric, thereby eliminating much of the danger-zone for pec tears.
Bench Press, Chest, Exercise Coaching, Tips
Mark Dugdale June 26 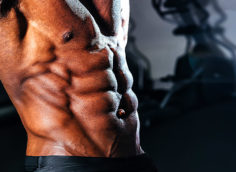