It happened in the spring of 2017. I was playing basketball in a brand new pair of shoes, on a concrete court, for the first time in months, after a rushed warm-up. It was almost inevitable that I’d get injured, and fate delivered to the tune of a bilateral patellar tendon full rupture. 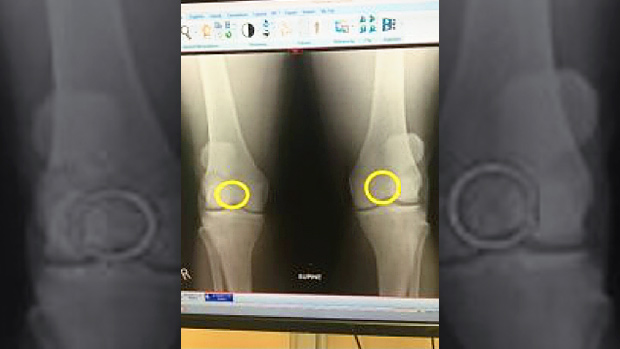 In English, this means the patellar tendons in my knees (the beefy cord beneath the kneecap that holds it in place) were both completely separated, basically disallowing leg function. Circled in yellow on the photo above are the places where my knee caps were supposed to be, and floating well above those spots is where they were displaced by the injury – up on my quadriceps.

That meant surgery, followed by rolling around in a wheelchair for a month before attempting to walk again with braces and crutches. It was another two and a half months before I attempted to walk free of assistance. By that time, my legs were the size of toothpicks and I couldn’t bend my knees farther than 90 degrees.

My road to recovery began about 15 months ago, and though it’s not over I’ve got full range of motion and my lifts are almost back to where they were before I got hurt. I’m deadlifting 505 again and front squatting 305. I can run, jump, and sprint to limited capacities, which is also great news.

But it didn’t take a conventional approach to get here. If you’re injured, maybe my experiences can help you make the right choices in the weight room. Here are the rules I followed.

This sounds a little trite, but there’s plenty of truth to the psychological toll a serious injury can have on an active person – especially one who’s seen some solid results in the gym. As a coach, it was doubly hard for me since it also affected my livelihood.

Going to the gym rather than feeling sorry for yourself is huge. Not only that, but half of healing is about blood flow and circulation. When you’re sidelined by an acute injury, there are still plenty of other muscle groups you can train while being careful not to aggravate any injured areas. Besides, it’s going to make the injured site feel better.

Rule 2 – Range of Motion (ROM) Matters Above All

If you’re injured, do everything you can to restore your mobility and flexibility. Stretching and mobilizing are key to getting back. And learn this – the mobility you have when healthy not only helps you avoid injury, but it also helps you recover much better in the event you DO get injured. Being tight as a rope never helped anyone. Treat your tedious, non-injured drills and stretches with respect, and prioritize them daily.

It’s also useful to remember that muscles don’t stretch out and push – they only shorten and pull. That means that any active range of motion you pursue will be a product of muscle tissue, somewhere, contracting and shortening.

But when you’re injured and trying to restore ROM, this fact can sometimes get in the way. In my case, what I found to be much more effective early on than shallow box squats was the leg press (with as little as the empty sled). I used it to regain some strength in my quads while deliberately trying to let it “push me down” into more range of motion, passively.

It was better than any stretch or drill, and it doubled as hard work for the quads and knees.

Rule 3 – Don’t Do the Big Stuff Every Day

If you have a big injury, it’s easy to gauge your recovery by how well you do on the big lift that relies on the injured spot the most. For knees, that’s the squat or deadlift. For shoulders, the bench press or strict press. You get the idea.

It’s easy to get into the habit of retesting and tracking your strength in those big, relevant lifts. There’s nothing wrong with that, but it’s easy to fall down the rabbit hole of having too much of a good thing.

One thing I had to be careful about was rehabbing my knees just so I could do heavy squats and deadlifts again. I needed to diversify my training and find other ways to challenge the strength, mobility, and stability of my knees that transcended conventional barbell training, things like tiger sit-outs (see video), 1-minute marches on a BOSU ball, lateral walking and shuffling, and basic kneel-to-stand exercises, all of which proved to be a challenge and a half.

I took long breaks between attempts at barbell squats and deadlift variations, sometimes nearly a month. It’s smart to place the focus on other movements that are simultaneously kinder to the joint in question while providing it with a much needed challenge (one that may have still been humbling even before you got hurt).

I’m not talking about steroids. I’m talking about lifting gear. If you have an injury to a major joint, remember that the affected joint is only one piece of a chain. Since I had insufficient range of motion at my knees, along with weak quads, my lower back had to endure tremendous amounts of unavoidable overload. My calves got tight and my T-spine was also a mess.

Trying to force feed big lifts completely raw was a mistake I made early on. Too much volume in certain movements resulted in odd swelling of the knees and a restricted ROM as a byproduct. Wearing knee sleeves and belting up for big lifts was a saving grace for my joints on the days where I had to push my threshold.

With joint injuries, plenty of the joint aggravation, stress, and discomfort experienced while lifting comes from decelerating and changing directions with load.

When you think about it, that’s a very demanding task. If you don’t have pinpoint control of your speed and timing, chances are you’re going to make a bad situation worse when handling moderate to heavy weights. In the case of deadlifting and squatting, I followed these rules:

I started using this approach in 2013 after a back injury and it helped me train the pattern while protecting the injury. Doing a deadlift pattern without worrying about the negative rep puts a ceiling on our time under tension. Simply let the bar drop fairly quickly, though under control, on the way down.

In the case of shoulder injuries and pressing, movements like pin presses, board presses, and full-range paused-rep bench presses or strict presses will achieve the same goals.

Starting your deadlift by pulling up into your start position, rather than reaching down to it (see video), can be a make or break factor for knee and back stress. If either of those are your issue, use this tip.

Box squat. As you start to regain range of motion, deal with the eccentric loading by squatting to a box and pausing before squatting back up. This gives you a target to squat to, one that allows you to mark the depth you’ve achieved.

On top of this, coming to a full stop on the box allows the tendons and ligaments to remain tight in a much more controlled environment and avoids the moment of stress-inducing “rebound” through the bottom end range.

Once you start disassociating yourself from the feeling of training, recovery, and healing, you usually start getting preoccupied with the number of reps completed and you no longer stay in tune with your progress.

I made it a point to chase a connection with the muscles and joints in question. Many times, that meant not worrying about what my recommended sets and reps were on a given exercise. It meant training intuitively and knowing when to ramp something up when it felt great, and when to back off when I could tell it wasn’t doing my injury any favors.

Rule 7 – Get Fit Outside of the Gym

Weight training is a way to become more athletic, but it won’t recreate athleticism if you’ve lost your athleticism. If you want a way to avoid moving heavy things while still getting a fantastic training effect for your injured joints, never underestimate the power of doing something simple, like going for a walk, jogging lightly up a hill, or taking a swim.

The hydrotherapy I did very early on in my rehab was invaluable to my progress, and squatting and lunging in knee-high water reduces the weight you bear and allows you to use a greater range of motion with less pain or pressure (similar to the leg press example I used earlier).

My point is, going through ranges of motion, increasing your muscle temperature, releasing lubricating joint fluid, and training the affected muscles themselves doesn’t need to be restricted to the weight room.

Being athletic in a moderate and mature way when you’re at the appropriate point in recovery can help expedite the process and it’s something you shouldn’t forget about.

Don’t be intimidated by your injury. If I did it, you can too. Here’s me pulling 505 recently.