Warning: This article may cause heart palpitations, ulcers, and sleepless nights. It will make anyone who's not a competitive powerlifter question everything they thought they knew about the squat.

It's time to get rid of the word "depth" from your squat vocabulary. Really. It's a meaningless and irrelevant term that may be hurting you or your clients' performance and possibly causing needless injury.

If, in 10 years, this senseless requirement has been eliminated from every gym, college, high school, and professional sporting team's weight room, I'll have accomplished my mission.

Who am I to have this radical goal? I'm a former world-champion powerlifter, member of Westside Barbell, and a strength coach with 20 years experience. My training partners at Westside were Louie Simmons, Dave Tate, Jim Wendler and Chuck Vogelpuhl, to name a few. I had the fourth highest total in the world all-time (2,436 pounds) and out-totalled Dave and Jim in every powerlifting meet we entered together. 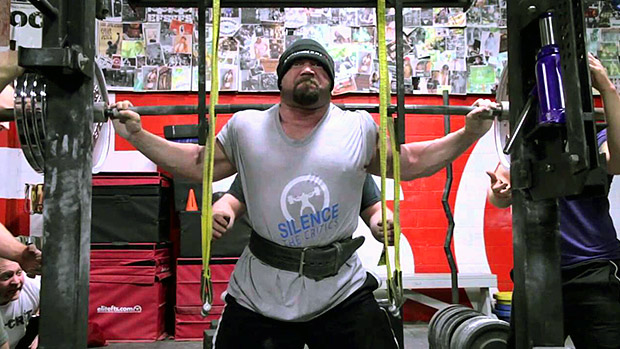 This isn't about me, though. This is about redefining how you look at, assess, and utilize the squat to get the most out of your performance while simultaneously keeping your body healthy and making HFG (Huge F*ing Gains).

While I came up with the premise of this article and authored the first part, I enlisted a good friend, Geoff Girvitz from Bang Fitness, to write the second half because he's better at the basics of movement than just about anyone I've ever met. But first, let me present my argument.

In the late 60's, three guys from Missouri took three exercises – the squat, bench, and deadlift – and created the sport of powerlifting. Then they came up with some simple rules. As far as the squat, they determined that a valid squat required that the crease of the hip pass the knee. The term "depth" was born. 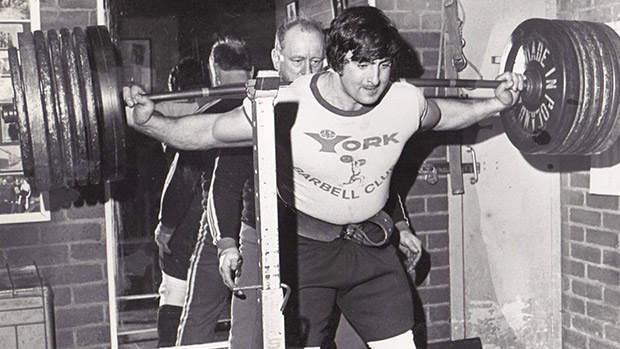 As strength and conditioning burgeoned, everyone adopted this arbitrary standard for squatting as the golden rule. But look, a squat is nothing more than joint movement at the ankle, knee, and hip. It doesn't matter if you squat down one inch or to the floor – both qualify as squats. Yet, for some unknown reason, the rule that applied to the sport of powerlifting was universally applied to everyone who put a bar on their back and started to descend.

Sure, standards are good. They're designed to keep all of us from sucking. But being focused on depth doesn't even consider one of the major joints involved in squatting: the ankle.

On top of this, and most importantly, it doesn't even take into account the most important factor in determining strength and performance gains, which is the range of motion (ROM) through which the joint is worked. Yes, range of motion at the ankle, knee, and hip should be the standards by which you're coaching, assessing, or doing the squat.

To prove this point emphatically, look at the two photos here. 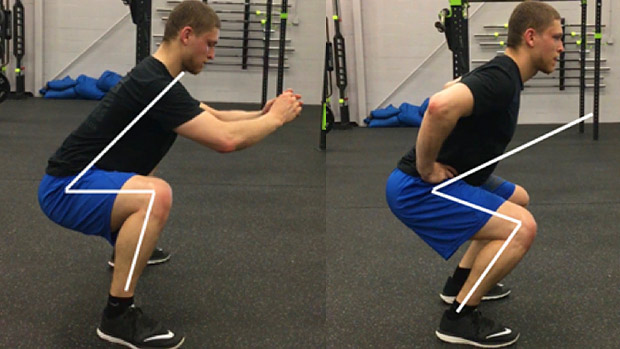 Both have the knee joints moving through the same ROM (as demonstrated by the lines – which weren't changed, only rotated), but one has a different ankle ROM than the other. By depth standards, this means one squat is "high" and the other is "good," but yet the ROM is the same. And ROM is what determines strength gains, not depth.

So why in God's name is everyone who's not in the sport of powerlifting still referencing depth? It makes no sense and it may be hurting your performance and potentially creating injuries, and all just for senseless tradition.

Here's where I hand off to Geoff Girvitz so he can talk about what's really important in the squat.

The 5 Things That Really Matter in Squatting

Whether you're a coach, an athlete, or simply serious about lifting, taking squat depth out of the equation is a bit of a shock to the system. At the end of the day, we all just want clear indicators that people are squatting well, but squat depth isn't important. Here's what is:

1 – It's important to have healthy ankles.

Powerlifting depth standards are based on the hips and knees. Confusingly, so is most academic research on squat kinematics. But what about the ankle? Strangely, they all largely ignore one of the three moving joints in a squat.

Whether you're a sprinter, a wrestler, or just a regular dude after some good, old-fashioned gains, you have to remember that squats – at least for you – aren't a competitive movement. They're a means to an end. But many people have fallen into the trap of prioritizing their squat numbers over their primary goals.

It's an easy mistake to make. Being stronger generally transfers into better performance and the squat has incredible potential there, but there are still limits to that transfer, especially when your ability to put force into the ground sucks.

Your feet, including your ankles, are the conduit for that force transfer. Unfortunately, many people fail to strengthen this section of their body enough to handle big forces through a complete range of motion. A weak link is a weak link.

The workaround is, of course, to elevate the heels with specialized shoes or some kind of wedge. But this is where squat numbers and squat transfer start to diverge. If all of your focus is on hip ROM and none of it's on forefoot loading or ankle ROM, you're missing out on a major opportunity for growth. This is especially true when those same things impact your athletic performance.

If you've never really paid attention to how you're using the ankle and forefoot to squat, pull some weight off the bar and play around with greater forefoot loading (the heel still stays down). If you have a tendency to pitch forward as you get into the hole, take note. There's a good chance that you lack eccentric control of ankle dorsiflexion, especially if conventional approaches to correct this have failed.

2 – It's important to train in a way that benefits your goals and anatomy.

Spine mechanics expert Stuart McGill often makes reference to "Celtic hips," which refers to having deeper hip sockets that make squatting more difficult. If that description applies to you, then you're not doing yourself any favors when you max out hip flexion in your squats.

Deep hip joints mean that you're going to be butting up against your own skeleton when you use extreme ranges of motion. This is the opposite end of the continuum that we might see in Olympic weightlifters that have a far larger range of motion accessible to them.

NFL strength and conditioning coach Tom Myslinski has lectured on this very point. His communication with some of the top hip surgeons in the country has revealed that many offensive linemen are being forced to have hip surgery due to using heavy loads in ranges of motion that their hips aren't built to handle.

Requiring these athletes to squat to extreme ROM (for their body) is literally shortening their careers and causing lifelong damage, and all because we're using an arbitrary depth standard that has nothing to do with athletic performance or a particular sport. It's beyond ridiculous.

You don't need to play pro football to take your own limits into consideration. Here's a crazy idea: If squatting makes your joints cranky, consider setting your depth to a point that allows you to load up and still feel great afterwards! Sometimes the difference of a single inch of depth can be huge in terms of impact to hip or low-back health.

3 – It's important to have strict standards.

Just because everyone's been accessing the squat incorrectly by 1) ignoring the ankle and 2) using an arbitrary standard designed for a specific sport (powerlifting) isn't an excuse to get goofy about things.

Whether you're going ass-to-ankle or simply performing a partial ROM squat (what JL and I would call a "sport squat"), your ROM and movement should be consistent and your quality should be high.

Set pins or sit back onto boxes. Take video. Get feedback. Do anything you need to set a clear standard for quality. Make sure that your standards transfer to your goals and then hold yourself to those standards.

Remember that the SAID principle (Specific Adaptations to Imposed Demands) applies here. Some athletes, like jiu jitsu guys and wrestlers, will need access to every available bit of ROM. Others will not.

For example, let me know if you ever see an NBA player drop into an ass-to-ankle squat before dunking. Helping players stay healthy definitely trumps any tiny potential advantage they might get from hammering on a range of motion that isn't required by their sport.

Besides, most of the time, elite athletes are "pre-sorted" by what their bodies can do. You won't typically see elite Olympic weightlifters with deep acetabula, 5'3" pro volleyball players, or super-heavyweight soccer players. Recreational athletes will, of course, bend these rules a lot more, but everyone should prioritize longevity, especially if the only reason you're playing is for fun.

4 – It's important to have access to a full range of motion.

One of the main benefits of the squat is its transfer to daily activities. Who cares how strong you are if you can't tie your shoelaces?

When it comes to general mobility and muscle-building demands, an extensive ROM is actually required, but loading is a lot more negotiable, or even unnecessary. Bodyweight squats are enough to get the job done when working on ROM because the question should be, "Do you have functional access to an extensive ROM?" and not "Can I do a thousand-pound squat through every bit of ROM I possess?"

The ability to tie your shoelaces or pick up a toddler doesn't improve when you go from a 400-pound to a 900-pound squat. It just doesn't matter. The SAID principle applies to daily life just as much as it does to training athletes or yourself.

5 – It's important not to be a judgy asshole.

If you've made it this far, you're probably open-minded about training. In other words, you're not a judgy asshole, so you've got that going for you. But just in case you're on the fence, let's cap this off with a final thought:

Should you call some random person out on Instagram for doing shallow squats? Maybe... if they're prepping for a powerlifting meet and you honestly believe you're helping them.

Otherwise, knock that shit off. There's absolutely no need to be dismissive about someone else's hard work based on a single, arbitrary criterion, especially if you don't know what they're training for. Each goal needs its own specific approach.

We know what it's like to look at squats through a powerlifting lens. Now, it's time to develop standards based on other training goals.

Forget those three-month diet plans. If you have six weeks and an ounce of discipline, you can get in awesome shape. Here’s how.
Fat Loss Training, Training
Erick Minor September 23

The strongest lifters use straps, but not all the time. Here's a guide to help you decide when, and when not, to use them.
Tips, Training
Christian Thibaudeau December 26