When most lifters boast online about their Herculean squat numbers, I'd guess that 80 percent or more are referring to back squats.

It's the most popular squat variation in the world – and I'll be the first to give it the credit it deserves – but there are times when it might be advantageous to give your traps a break and incorporate front squats.

After all, they reason, what can you get from front squats that you can't get from back squats? Good question.

Why Should I Be Doing Front Squats?

Front squats will do three things if you do them correctly:

When a barbell is loaded on the front of the body, the pelvis gets to tilt backwards somewhat, which makes the hamstrings less taut. This gives them the freedom to allow a greater ROM at the bottom of the lift. This pelvic tilt also allows the lower abs to contribute to the lift more, and takes the hip flexors away from "blocking" the movement.

So, just like a goblet squat, you get a hell of a lot lower then you do in a back squat. The torso also gets to stay more upright, which requires the obliques to provide stability.

Finally, due to the tremendous knee extension involved, the front squat is rightly seen as a major quad developer. Since the thighs drop far below parallel to the floor, it's safe to say that hip flexion is greatly increased too, forcing the glutes to assist the concentric half of the lift.

With all of these kick-ass benefits, it seems like a no-brainer that front squats should make a regular appearance in a typical program.

Why You Suck At Front Squats

Other than the obvious (you aren't doing them enough), there are a few things that limit lifters from achieving a decent front squat.

Front squats require considerable core involvement. You'd do well to incorporate some exercises for anti – extension (to prevent overarch) and oblique work so they function well as stabilizers. 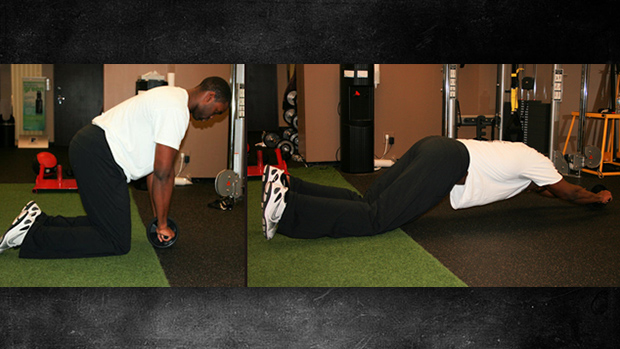 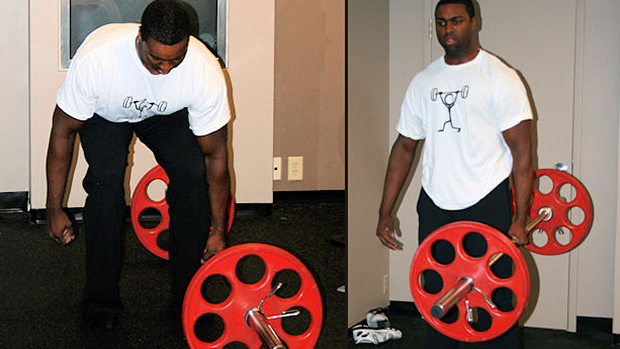 These are a few of what I consider to be staple movements to improve the function of the abdominals and wake them up for the real stuff.

The goal should be to keep the elbows pointing as far upwards as possible to promote parallel lines between the upper arm and the floor at all times.

If you've noticed that every time you front squat your elbows start pointing towards the floor after only two reps, causing you to rack the weight prematurely, there's a reason for that.

In this case, the first thing to do would be to activate your rotator cuff. If these small muscles aren't playing their part in externally rotating the upper arm, your elbows will drop faster than Tiger Woods' "Just Do It" promo.

Luckily, there are a couple of things you can do to remedy that problem.

Be sure to use a light weight. It won't take much!

Proper thoracic extension is very important for front squats, as the Turtleback syndrome affects many when they have to bear a front load.

Take a barbell and perform a set of five front squats. Do you notice your mid-back rolling like the Andes? Have someone watch you if you have any doubts.

Either way, there are a few simple fixes.

(See this article for examples of all three)

Something to keep in mind though – studies have shown that after the sixth rep of a typical set of front squats or front loaded work, the rhomboids begin fatiguing and can no longer hold a constant isometric. For this reason, try to keep sets of front squats towards the lower end of the repetition continuum.

Many lifters will use the "California" style or cross-armed grip on the bar to allow it to rest on the shoulders when performing a front squat. Big mistake. Since one elbow stays higher than the other on a cross-armed grip, under substantial load, it can act against proper structural alignment of the shoulders, and has the potential to refer imbalances right through to the hips and knees. 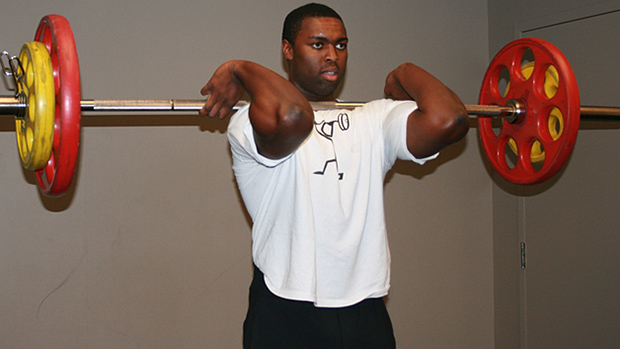 For this reason, I highly recommend using a clean grip, which also has better carryover to proper techniques involved with any Olympic lifts as well as overhead pressing. It may feel uncomfortable at first, but remember to keep a proud chest and get those elbows up!

It's okay to remove a finger or two from under the bar (I like to remove my thumb and pinky finger as it helps take stress off the wrists and allows for the elbows to stay up). Otherwise, make sure the lats, triceps, and forearms get a good stretch before beginning. (See picture below.)

Here are some basic tips to look out for when doing front squats.

Lifters Who Should Be All Over Front Squats

Tall Lifters. It's asking a lot of someone who's over six feet to get far below parallel during a back squat. Front loading allows the center of gravity to shift backwards slightly, and unloads the low back and hips enough for them to achieve this depth. Your chicken legs may be due to lack of back squatting depth.

Lifters With Tight Hamstrings. As noted, a front load will make the hamstrings less taut, and therefore promote more range of motion during the negative phase of the squat.

Getting Out of The "Embarrassing" Category

If these pointers alone don't substantially improve your front squat, I've put together a cool quasi-workout that serves as a good tool to bring up your fronts.

Think of this as a "front squat conditioning" workout. The goal is to get the abs firing correctly, get the upper back tight, and start practicing the movement properly and under decent load.

Perform the following workout as a sequence. Rest 90 seconds between each exercise.

This mini-workout will take 20 minutes to get through. You'll notice reps are kept low, as are intensities. The reason for this is the abdominals and upper back muscles are being hit with direct exercises to mildly fatigue them between each set of front squats. Loading aggressively could be inviting injury. An elevated heart rate – thanks to the 90-second rest interval – will allow practicing keeping the elbows high and chest up while slightly fatigued.

There's nothing fancy-shmancy about this workout, and it doesn't even need to replace a real leg workout. Chances are you won't be too sore the next day, either. This workout can find its home on a supplementary day for a few weeks.

Adding load to the body effectively trains muscle, of course. Contrary to popular belief, though, the answer isn't always throwing on heavier and heavier weight. You'd be surprised how added ROM, improved technique, or a bit of both can be game-changers for tapping into sleepy motor units or just plain increasing difficulty.

Moreover, they just may be the missing link to make you the guy whose chicken legs flew the coop.

Are you already as flexible as you need to be? Here's what science says.
Mobility, Tips, Training
Dr Grove Higgins May 7 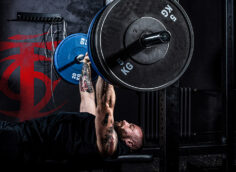 Unless you're a competitive lifter, there's little reason to do a one-rep max. A 2-3RM works better for building strength. Here's why.
Powerlifting & Strength
Christian Thibaudeau April 20