Unless for the past century your mailing address has read “Third Cave on the Left, Tora Bora,” then you’re likely well aware of just how awesome the hamstrings are.

All this posterior praise is richly deserved. The hamstrings: 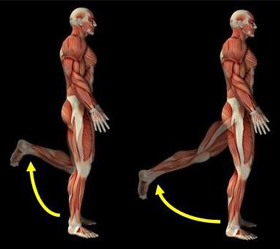 The short head of the biceps femoris is the only hamstring muscle that does not extend to the hip, since it only crosses the knee joint. The other hamstring muscles, namely the long head of the biceps femoris, semitendinosus, and semimembranosus, all cross both the knee and hip joints (which makes them biarticular muscles) and are capable of extending the hip and flexing the knee joint. The semitendinosus and semimembranosus are also known as the medial hamstrings.

Why You Should Care About Your Hamstrings

From an aesthetic point-of-view, muscular hamstrings separate the four shots of espresso men from the decaf soy latte with extra foam boys. Many lifters obtain impressive showy quadriceps, but very few possess respectable hamstring development. It’s not surprising, muscular hamstrings signify hard work and consistency, not to mention well designed programming. The fact that they drive even your most conservative female coworkers to slap your behind at the photocopier is merely an added bonus, if at times an awkward one.

From a functional standpoint, muscular hamstrings will greatly improve your deadlifting strength and your maximum speed. Plenty of EMG studies show that the hamstrings are the most active forward propulsion muscle during high speed running as they contribute the majority of the terminal swing hip extension and knee flexion torques, while the gluteus maximus contribute most of the stance phase hip extension torque.

From a safety and health standpoint, strong hamstrings will help prevent hamstring strains and ACL injuries. The long head of the biceps femoris is the most commonly injured hamstring muscle: Individuals who don’t possess at least a .60 hamstrings to quadriceps strength ratio are 17 times more likely to injure their hamstrings.

The Four Types of Hamstring Exercises

With this in mind, there are four main types of hamstring exercises:

This is unfortunate, as this category of hamstring exercise trains the hamstrings through both of their primary functions, essentially allowing you to “kill two bros with one stone.”

This exercise category also does a better job of training the eccentric component of knee flexion compared to traditional leg curls; and since the category also works the glutes isometrically, you’re definitely getting more bang for your exercise buck.

Therefore, let’s focus on this category of hamstring exercise for our selected exercises and descriptions.

Slideboard leg curls are great because they simultaneously work both hip extension and knee flexion. They’re actually very similar to the more commonly known stability ball leg curls, but have two key advantages in that they’re more stable (so it’s easier to focus directly on the movement without worrying about balance), and it’s easier to apply progressive resistance as you get stronger.

With your feet planted firmly on the slideboard, begin by squeezing your glutes and extending your hips into a bridge position. Your shoulders, hips, and knees should all form a straight line. Maintain that body position throughout the set.

From there, simply slide your feet out until your legs are completely extended and then pull back using your heels, keeping your hips up the whole time. This exercise keeps constant tension on the hamstrings because you have to push out on the eccentric and pull back on the concentric.

It also teaches glute activation because you must keep the glutes firing hard throughout the set to keep the hips from sagging. When bodyweight becomes too easy, using bands or placing weight plates underneath your feet – which increases the bridge height and provides more friction against the slideboard – can add resistance. It can also be performed unilaterally for an even greater challenge.

If you don’t have access to a slideboard, you can create a similar training effect using a pair of Valslides or plastic furniture movers on a carpeted surface, or even just placing a towel on a wooden floor or any other slick surface.

Created by a staff member at Mike Boyle Strength & Conditioning, slideboard bodycurls are a great progression from slideboard leg curls.

The setup is similar except your torso goes on the slideboard rather than your feet. Your feet stay planted on the ground while you push and pull your body back and forth (hence the name bodycurl) while staying in the bridged position. These are a bit tougher than the slideboard leg curls because of the leverages involved and the fact that you’re moving a higher percentage of your bodyweight. Again, further resistance can be added by placing weight plates underneath your shoulders to create more friction. See the video below for a demonstration.

This exercise closely resembles the slideboard bodycurl but offers several additional benefits. Here, resistance is supplied by gravity and bodyweight. The initial setup is similar to that of the inverted row, lying upside down holding on to suspension straps with the feet elevated on a bench.

Begin by squeezing the glutes and bridging upward such that the shoulders, hips, and knees form a straight line. Next, dig your heels into the bench and pull your bodyweight forward, all the while engaging your glutes and maintaining the bridged position. From there, lower yourself back down SLOWLY.

It’s important to keep this movement slow and controlled to emphasize the eccentric component and keep from using momentum to complete the reps. To this end, it’s also crucial to keep the arms straight and the scapula retracted: this will also help to make sure you don’t create momentum with your upper body while simultaneously strengthening the posterior shoulder complex and encouraging scapula stability through the isometric contraction of the upper back.

This exercise can be made harder by wearing a weighted vest, increasing the height of the bench, or increasing the length of the straps. It can also be performed unilaterally.

While this exercise is performed on a 45-degree hyperextension bench, it’s not your run of the mill back extension; in fact, it can be a great alternative in gyms that don’t have a glute-ham bench.

Like the previous exercises, the key is to keep the hips in line with the shoulders at the top of the movement and prevent the lower back from going into hyperextension. The knees should be slightly bent and the hips should come off the pad slightly at the top, with this extra motion being initiated from the hamstrings and glutes and not from the lumbar erectors.

The glute ham raise is a very popular exercise, but most lifters aren’t familiar with the biomechanics and progressions involved with them. The video on the right will make you an expert at the glute ham raises! Now go hit them so your hamstring power matches your brainpower!

The Russian leg curl is probably the best eccentric knee-flexion hamstring exercise in existence. First thing, make sure to put a good amount of padding beneath the knees to protect them from injury. This exercise can initially be performed with a slight forward trunk lean, which makes it slightly easier and allows individuals to better control the eccentric portion of the lift.

However, the exercise can be progressed by keeping the torso more erect, performing the entire rep (eccentric, reversal, and concentric) without any “push-up” assistance, and finally by adding resistance by holding onto a plate.

The seat and knee padding of a lat pulldown machine can be used effectively at the gym to perform Russian leg curls, but the most common method is to simply have your trusty partner hold onto the back of your legs.

7 – Other Ways to Hit the Hammies

The hamstrings certainly get worked by simultaneous hip extension and knee extension (squatting) motions and bent leg hip extension (bridging) motions, although they’re not prime movers in these activities. Furthermore, the leg press performed with the feet placed high on the platform (known as the “sumo leg press” or “hamstring accentuated leg press”) is a great hamstring exercise.

It should also be noted that 30-meter fly sprints, kettlebell swings, straight legged cable pull-throughs, and one legged standing cable hip extensions are decent hamstring exercises as well. Tried and true quad and ham blasters like deep squatting, deadlifts, rack pulls, lunges, and hip thrusts also do a decent job of strengthening the hamstrings, but for focused hamstring training with the primary goal of hypertrophy, we recommend sticking with the exercise variations listed above.

After reading this article you have no excuse sporting gimpy, injury-prone hamstrings that disappear when you turn to the side. For best results, developmentally speaking, we recommend performing all types of hamstring exercises in all rep ranges. The hamstrings can be effectively trained 2-3 times per week to make this kind of variety possible.

However, if your hamstrings are exceptionally weak, there’s no reason you can’t perform a couple of sets of hamstring exercises every day until they’re up to par. Numerous powerlifters have used this strategy with the glute ham raise to quickly increase their hamstring size and strength.

So quit making excuses about “overtraining” and get to it!