When you think of science, the first thing that probably comes to mind is images of atrophied, goggle-wearing weaklings in white coats. Bulging muscles and inhuman strength are certainly not part of your mental image!

This, my friends, is a mistake.

See, science–especially exercise science–is full of iron pumpers just like you. And if you're willing to listen to those "in the know," you might just learn a thing or two about growing muscle that could drastically increase your rate of progress.

In this article, I'm going to apply some scientific findings specific to a very powerful type of training: accentuated eccentric training. Yes, I've written about that topic in the past, but recent digging has allowed me to come up with some brand new ways to integrate it into a weekly program. And it might very well change the way you train and grow! Interested? I thought so!

We're going to talk about three findings in regards to accentuated training and then I'll show you how to integrate them into your training program.

These aforementioned findings are:

1. Eccentric training is the most powerful growth stimulus, but it can reduce maximal force, reduce fiber recruitment during intense muscle contraction, and reduce coordination for up to seven days.

3. A bout of eccentric training reduces the capacity to produce high force and power for around six days, but during that time it actually increases the ability to maintain a moderate force output for a longer period (i.e. it improves strength-endurance).

I've already described why eccentric stress is a superior way to stimulate strength and size gains in my earlier article on accentuated eccentric training. I won't bore you again with all the science talk, but here are the key points:

• An early study by Komi and Buskirk (1972) recorded greater strength increases after an eccentric training regimen than after a concentric-only regimen.

However, a lot of evidence also points out that intense eccentric loading reduces the capacity to produce a lot of force for up to seven days (Komi and Vitasalo, 1977; Linnamo et al. 2000; McHugh et al. 2000 just to quote a few).

Sorichter et al. found that the concentric session might even have a "massaging" effect that could improve recovery. The study by Saxton and Donnelly is even more interesting as it found that performing light concentric training on the days after the intense eccentric loading actually increased the rate of force recovery and reduced the duration and intensity of the soreness caused by eccentric training.

Eccentric training seems to preferentially fatigue and damage the fast-twitch muscle fibers (Linnamo et al. 2000). In fact, one study using an ungodly volume of explosive eccentric training (also known as plyometric work) found that force production of the gastrocnemius decreased while that of the soleus was relatively unaffected by the bout of jumping exercise. Since the first is mostly fast-twitch dominant while the latter is of a slow-twitch nature, this constitutes indirect evidence of the fast-twitch specific impact of eccentric training.

In line with that finding are the results of a study by Byrne and Eston (2002) that eccentric training causes a reduction in the capacity to produce a lot of force and power during the recovery period, but that the ability to maintain a moderate contraction intensity is actually increased! Why is that? Because the slow twitch fibers take the bulk of the work since the fast twitch fibers are injured and are under repair.

Great, But How Will It Make Me Hyooooge?

These findings led me to create a new training template called eccentric-base training. In this template the following rules apply:

A. Start the week with an accentuated eccentric session for the whole body. [In short, accentuated eccentric training involves one of the three variables: lifting with two limbs and lowering with one; combining two different movements, e.g. a power clean to lift the resistance and a reverse curl to lower it; or doing a slow eccentric.]

B. Followed by two moderate intensity concentric sessions (one for the upper body, one for the lower body).

C. Conclude the week with either a limit strength or an explosive workout (or even a combination of both).

The methods you'll use on this day will vary depending on your goal. If strength is your main objective, you'll want to use maximal eccentric methods such as using weight releasers (lowering 100-110% of your concentric max under control, ideally in about five seconds) or have a partner push down hard on the bar during the eccentric portion of the lift. In both cases, the bar weight should be around 80-85%.

If size is what you're after, methods such as super-slow eccentrics (performing the eccentric portion in 8-10 seconds) or the 2/1 technique (concentric with two limbs, eccentric with one limb in five seconds) will be your best bet.

Finally, if you want power, this is the time to use a hefty dose of plyometric work.

Try to use compound movements as much as possible to keep training time under 75 minutes.

You'll be training "for the pump" during these sessions. Using a moderate weight, perform 12 to 20 reps at a brisk pace. Don't drop the weight on the way down, but try to minimize the eccentric phase of the exercise as much as possible.

Agonist/antagonist supersets (for example, alternating between one set for the pectorals and one set for the upper back) should be the preferred way to train here. Don't use a weight that'll lead to muscle failure, but still make your sets challenging. In other words, stop when you have one or two reps left in the tank. Perform one or two exercises per muscle group for three to four sets each.

Once again, depending on your goal, the method will vary. If size is your goal, you'll want to use basic exercises performed in the functional hypertrophy zone (6 to 8 reps).

If you're going for strength, you should stay in the limit strength zone (1 to 5 reps), once again using basic movements. And finally, those who want to be explosive should either use the Olympic lift variations for two to five reps in the 70-90% intensity range or traditional exercises (squat, bench, deadlift, rowing) in the 45-55% range for explosive reps (two to five.)

Days 6 and 7 are good times to include some restorative measures discussed in my recovery article.

Science rules! This program will take full advantage of how your body responds to eccentric-base training. If you follow the guidelines, you're in for a shock when you see the magnitude of the results! 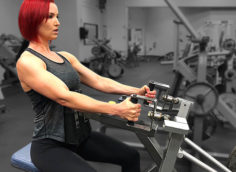 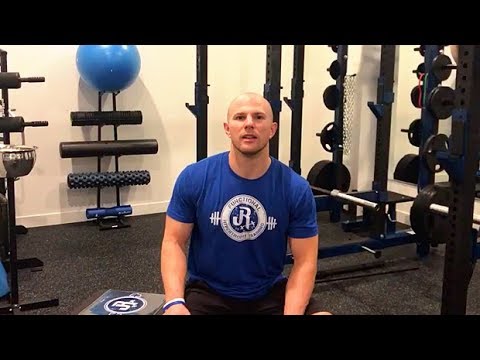 Stop grabbing your neck and cranking your head to the side to stretch it. Here's a better way.
Exercise Coaching, Mobility, Tips
Dr John Rusin November 20