Anterior pelvic tilt is a hot topic in the ever-turbulent online fitness community. While some therapists argue it's a normal spinal deviation, others say that it's something to be screened for and aggressively treated, the postural equivalent of a scorching case of herpes.

The non-stop controversy leads many lifters to automatically assume that 1) they have anterior pelvic tilt, and 2) they should be worried about it and actively trying to correct it. What these folks fail to realize is that there's a wide range of acceptable postures depending on various sagittal plane parameters.

In order to analyze standing spinopelvic posture, balance, and economy, researchers pay attention to the interrelationships between pelvic incidence, sacral slope, pelvic tilt, lumbar lordosis, thoracic kyphosis, T9 tilt, L1 tilt, C7 plum line, and gravity line. An explanation of these parameters and their relationships is beyond the scope of this article, but let's just say there's more to predicting spinal health than simply looking at one variable.

It's actually "normal' for healthy individuals to possess APT, and the average angle of anterior pelvic tilt ranges from 6-18° depending on the study and methods used to determine the angle, with around 12° appearing as the norm.

The body's standing posture tends to erode in a predictable manner as we age, and changes in thoracic, lumbar, and pelvic posture go hand in hand with one another. Discs degenerate and lose height, leading to thoracic kyphosis. The pelvis tilts posteriorly to compensate, leading to a loss in lumbar lordosis and a standing posture in greater hip extension.

In advanced stages of deterioration and compensation, knees flex to maintain balance, leading to an appearance of standing in hip flexion, despite truly being in hip extension due to excessive PPT. These compensations require muscular activity from the quadriceps and erector spinae and are costly from an energy standpoint, not to mention dysfunctional and likely injurious.

However, folks who lift weights – like you – don't portray these trends since they're building strength and staying fit, so the aforementioned compensations don't apply.

Though I'm unaware of actual research, I'd posit that the majority of lifters tend to develop increased anterior pelvic tilt, and this could be due to a number of reasons such as increased erector spinae and hip flexor strength relative to gluteal and abdominal strength, increased upper torso mass, or and/motor control retraining.

However, others aren't so lucky and problems can arise when APT becomes excessive, leading to dysfunction, usually in the lumbar spine. Rest assured, there is hope. 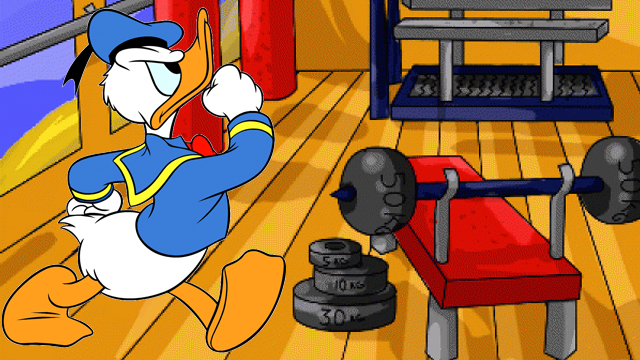 Are There Normal Lumbar and Thoracic Curves?

It's important to understand that there are no normal spinal curves, but rather an optimal range. Here's a quote from Barrey et al. (2007):

Into the normal population a standard sagittal balance does not exist. We can observe a great variability of spinal alignment, with a wide range of normal values in adults, and it is unreasonable to speak of normal kyphotic or lordotic curves.

The most important thing to have is optimal congruence between pelvic and spinal parameters in order to achieve an economic posture placing the axis of gravity in a physiologic position. To analyse sagittal balance of a subject it is fundamental now to include not only the spatial position of the pelvis but also its shape, reflected by pelvic incidence.

Several studies demonstrated chain of correlations between spino-pelvic parameters with the main role of the pelvic incidence, determining the organization of the lumbo-thoracic spine.

If the lumbar spine is overstressed due to excessive APT, a sparing effect could be observed if the body learned to function in less-extreme postures.

Is it Possible to Change Lumbopelvic Posture through Strength Training? 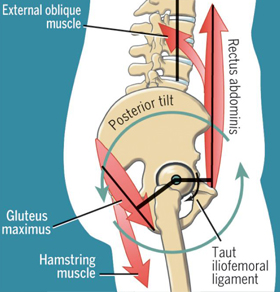 Research shows that many athletes from various sports such as football, basketball, and track & field lead to developments in APT, and many believe that these adaptations could be beneficial for sports performance (Kritz & Cronin, 2008).

It should be noted that the exercises used in the program were quite "beginner' (by T Nation standards) as the researchers had a group of physical therapists – who are notorious for prescribing wimpy exercises – to formulate the exercise prescriptions used in the study.

So it's likely that even better results are possible through implementing the methods I'll describe in this article.

This advice is legit, but incomplete.

Why Standard Recommendations for Excessive APT Could Be Problematic

Think about it. Why do so many athletes and lifters develop increased APT over the years? It's my belief that it's because they're constantly performing exercises and activities that require APT.

Furthermore, common sport specific activities and exercises such as sprinting and sit-ups dramatically strengthen the psoas and rectus femoris muscles. And on top of this we're adding squats, deadlifts, reverse hypers, and glute ham raises, all of which are typically performed in APT.

Day in and day out, athletes are training APT and strengthening the related muscles.

For this reason I argue the advice given by most coaches could do more harm than good when it comes to improving excessive APT. Try curing excessive APT through squats, Romanian deadlifts, sprinting, and sit ups and you'll likely spin your wheels or worse, go backwards.

When trying to improve pelvic posture, strengthen the opposing posture.

Think about it: we intuitively train opposing motions when attempting to improve upper body posture. What's the proposed cure for improving adducted scapulae and shoulder internal rotation brought upon by excessive bench pressing? Scapular retraction and shoulder external rotation. Why would the pelvis be any different?

People in PPT need to strengthen their erectors and improve their torque-production in lumbar extension and APT. Squats, Romanian deadlifts, and arched-back good mornings are perfect for these folks.

Furthermore, sit ups would work well for improving APT for this population as it also would strengthen APT torque production. Even properly performed exercises in a bent-over position such as rows and rear delt raises would improve static APT strength.

How to Train PPT 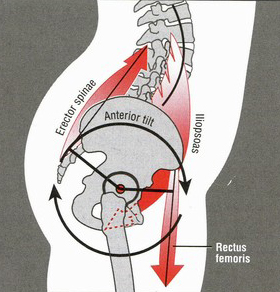 It's easy to think up ways to strengthen most joint actions, such as hip extension, scapular retraction, elbow extension, or knee flexion. As previously mentioned, our programs already do a good job of training APT.

But how do you strengthen PPT? How can you improve the body's ability to produce PPT torque?

If you simply PPT from a standing position with no load, you may learn the motion but won't develop strength since the motion doesn't require sufficient torque production. We need to think up exercises that require PPT torque under load, and depending on the exercise these movements can stress either the lower abdominals or the glutes. Below are some exercises that you can employ right away.

Many lifters would describe this as a proper Romanian deadlift, but the emphasis is on pelvic motion. Notice the APT at the bottom of the movement and the PPT at the lockout. You want to feel hammies down low and glutes up top.

You might suck at this at first but over time it gets easier. The point isn't to go extremely heavy, it's to strengthen the PPT movement pattern under load. This exercise focuses on the glutes' role as PPT'ers. I like doing 3 sets of 8 reps.

The PPTHT is a bodyweight hip thrust with the emphasis on pelvic motion, in combination with hip motion. Notice the rocking action of the pelvis as the hips flex and extend. This exercise also focuses on the glutes' role as PPT'ers. Aim for 2 sets of 30 reps.

Here's Steve Maxwell performing the HLR. Notice how high he brings up the legs, which ensures that the PPT pattern is trained. This exercise focuses on the lower abs' role as PPT'ers. I like 2 sets of 12 for myself but initially you may only be able to get a few. Over time you may be able to bust out 20-30.

The RKCP is quite technical – you may want to just focus on getting into a standard plank and then squeezing the glutes as hard as possible to achieve a PPT. In that case, don't worry about squeezing the grip, screwing the shoulders into place, squeezing the thighs together, contracting the quads, or pulling the elbows and feet towards each other – just get into plank position and posteriorly tilt the pelvis, holding the PPT for 30 straight seconds without letting up.

Initially your glutes will flutter as they won't have the endurance to hold the isometric contraction, but over time they'll be solid as can be and the glutes won't let up. The upshot is that the low abs and obliques kick into overdrive to help out in holding the PPT.

These activate 4X more lower abs, over 2X the internal oblique, and over 3X the external oblique musculature compared to the standard plank. So this exercise focuses on both the glutes and the abs as PPT'ers.

What Else Can Be Done for Eliminating APT?

In addition to strengthening PPT, there are other things you can do in efforts to eliminate APT. These include the following:

If you're in APT then you should definitely be stretching both the psoas and the rectus femoris, but ideally you'll incorporate the PPT into the stretches for greater efficacy. In the video below I discuss what the best practices are regarding hip flexor stretching.

Assuming you've mastered the PPT'ing action of the glutes and can perform proper hip thrusts, characterized by a neutral spine with full hip extension with no APT up top, it's time to get incredibly strong at hip thrusts.

This will strengthen the glutes in a shortened position and hit all the glute fibers (including the upper fibers which aren't trained sufficiently in the squat exercise). The caveat is that you can't allow APT to occur in the hip thrust, so make damn sure the glutes are pushing the hips upward and the spine stays in neutral.

Daily motor control reminders are also important for postural adaptations. Simply reminding yourself every fifteen minutes throughout the day to hold better posture will help correct poor posture and groove proper body position. As you increase your pelvic mobility and stability, it will be much easier for your body to hover in the midrange (neutral) pelvic position, which is what you want.

Just remember that what you do in the gym for one hour per day doesn't necessarily counteract what you do during the other 23 hours, so pay attention to daily posture.

I have a colleague who is a physical therapist, and he's been experimenting with these methods for the past year with great success. He and I are confident that the methods described in this article will help improve excessive APT due to the strengthening of the precise fibers required to produce PPT, the subsequent increases in available pelvic ROM, the stretching of the precise fibers that encourage APT, and the subsequent ability of the body to find and hover in mid-range.

If you're in excessive APT, then I recommend you abandon your current routine and stick solely with the exercises and stretches mentioned in this article for 8 solid weeks. See if this improves your pelvic posture and alleviates training-related low back pain. After the 8 weeks, resume your normal training, but be mindful of pelvic position in the future and be sure to incorporate some of these movements into your routine from time to time.

Pair your exercises the right way and you'll get bigger, faster. Here are 28 ways to do it!
Bodybuilding, Powerlifting & Strength, Training
Tom Furman April 28 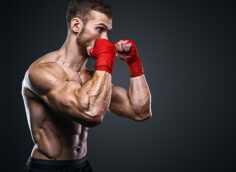 Your fight training is lacking if you're not lifting with intention. Here's how to accentuate the eccentric for a powerful strike.
Athletic Performance, Exercise Coaching
Alex Chrysovergis November 17

Bench press plateaus can be long and mind numbing. If this program doesn't catapult you out of your slump, nothing will.
Bench Press, Powerlifting & Strength, Training
Tim Henriques May 16