Birth of a Misguided Notion

I spent my formative years in a powerlifting gym. As such, powerlifting and strength work was seen as the answer to everything, training-wise.

But I wasn’t really interested in how much I could bench press for one rep. Instead, I was fascinated with developing a great physique.

Sadly, the only advice I got back then was that I had to bench press a lot of weight to have great chest development. Paradoxically, very few of these powerlifters had any great level of chest development themselves.

Do You Suffer From Bencher’s Chest? 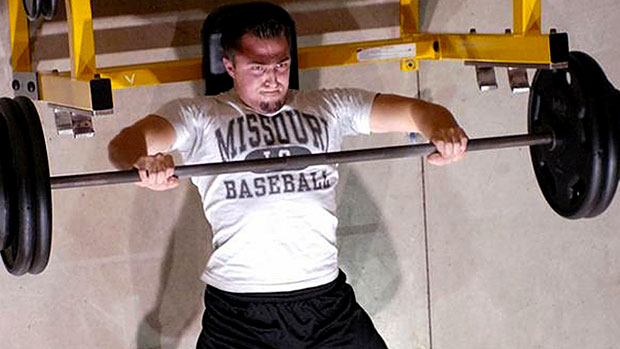 I call it bencher’s chest. It’s a term that describes the look a lifter has when he’s doing too much max-load bench pressing. It describes someone whose chest development looks better with his shirt on, rather than with his shirt off.

In other words, someone with “bencher’s chest” has pecs that look more developed from the outside-in than from the inner-pecs outward. Their pecs lack that thickness-cleavage at the center of the chest. And this look always seems to be connected to a guy who did a lot of heavy bench pressing, especially in his earlier years.

The cure for bencher’s chest is utilizing the standard barbell bench press as just another exercise in the program design, done for higher reps, along with utilizing far more incline work and chest flye motions. That would earn that coveted inside-out, thick-cleavage appearance of well-developed pecs.

Even more important though is for these guys to adopt dumbbell bench presses as their main movement. 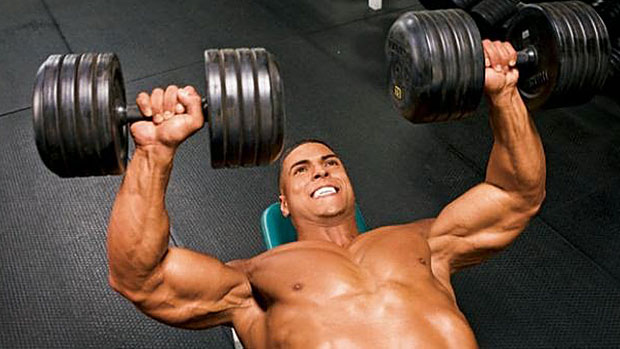 Of all the training tools used for resistance training, dumbbells are the best and most versatile, and they have a unique effect in terms of the body’s response to them.

I pretty much haven’t used a barbell in decades. Dumbbells are safer, have fewer joint consequences compared to the barbell, and are just superior training tools for developing independent motor control with resistance. 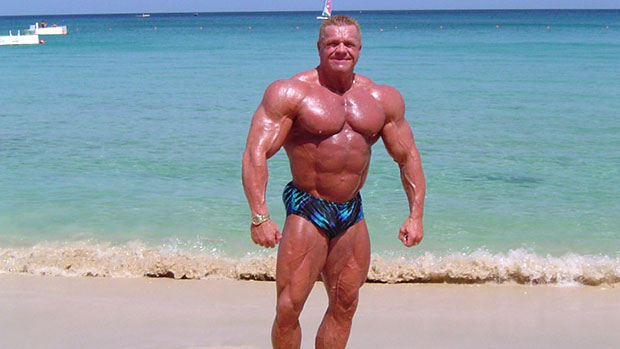 Scott Abel, in his 40’s, at 260 pounds at 5′ 9″. Note the chest development, accomplished without barbell work.

This latter influence can have an enhanced effect on fiber recruitment – even when the dumbbells are used bilaterally in the exact same way a barbell would be used, as in the dumbbell flat bench press vs. the barbell bench press.

Feet Up for Bodybuilder Pecs

Another way to enhance fiber recruitment is to place the feet up off the ground while doing dumbbell flat presses. This tweak produces joint stress transfer and presumably affects innervation in a positive way.

Furthermore, the dumbbell flat press can eliminate all the technique details of the regular barbell bench press that are used solely to lift as much weight as possible (legs driving into the ground, excessive chest arch, etc.).

After all, the less you have to think about regarding technique and execution of an exercise, the more available mental energy you have to concentrate on the targeted muscle under load.

Additionally, because dumbbells don’t connect the hands together like a barbell does, they stimulate and require more active, conscious, concentrated control. The movement is hard to do, but in a different way than the standard barbell bench press.

Train the Muscle, Not the Movement

More importantly for young and intermediate level lifters seeking physique development, the dumbbell flat bench press has the added benefit of keeping the movement honest. You can’t bounce or rebound dumbbells off your chest like you can when performing the standard barbell bench press.

In the barbell bench press, for instance, the net effect of the deliberate use of the lower body (driving the legs into the ground) is completely about increasing the amount of load that can be lifted. But by using dumbbells and putting your feet up on the end of the bench, it more effectively isolates and overloads the pecs.

Of course, both of these things lower the amount of weight you can lift, but that should be irrelevant. This is about size gains, not hitting one-rep PRs.

These external factors like “how much you lift” often become secondary if your goal is truly about muscular physique development. And it’s important to know the difference because some people never understand this.

Remember, for physique development, you train the muscle, not the movement. Powerlifters and strength athletes looking for max numbers in the bench press have the opposite mindset. They’re focused on training the movement, not the muscles.

What About the Decline Press? 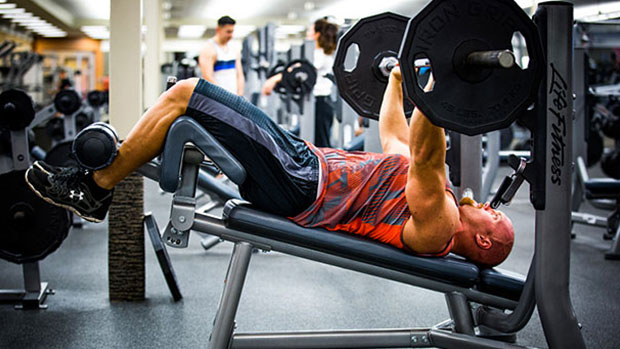 Since we’re talking about what works and what doesn’t work for chest development, I agree with Mark Rippetoe whole-heartedly when he says that the decline press is a useless exercise. 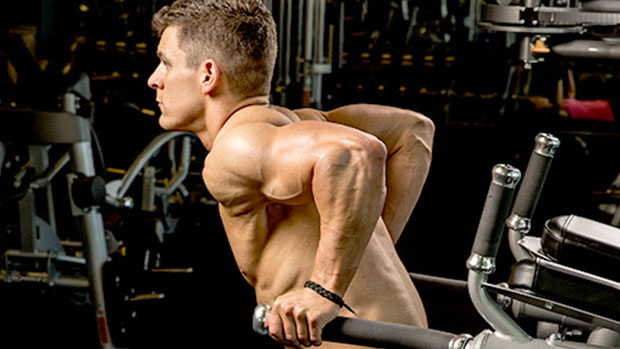 All these considerations make wide-dips a far more intelligent choice than the decline press for pec development or as an ancillary movement choice.

The Cure for Bencher’s Chest