This week I had to force myself to write a calf program. I say force because I once promised myself that I'd never write one... ever.

Truth be told, designing such programs has always been boring as hell! But thanks to the number of you who spoke up on behalf of your non-existent calves, I had to break my promise.

In exchange for that, though, the second part of this article will deal with cool old-school exercises. Why? Because I'm a student of old-time training and love the history of the iron game – back when guys got strong and muscular without steroids and other drugs.

Consider this my gift to myself, and who knows, maybe you'll even benefit from them too.

Tired of not getting anything out of your calf routine? Do you want to finally make the bastards grow?

Well, calf-less wonders, this is the program you've been waiting for!

Now, before you start bouncing around on those little things, there are some facts about calves that you must first understand:

Siff lunges, named after the late Dr. Mel Siff, consist of doing your lunges while staying on the tip of your toes at all times.

Start each repetition from a pause in the stretched position.

Note that each set has a total of 30 reps.

For this exercise, start each rep from a hold in the stretched position and hold the peak contraction for two seconds.

This routine can be performed up to three times per week, although most should stick to one or two weekly sessions.

If your calves have been lacking any luster for quite some time, this change of pace will put some cut in your strut.

Building an admirable physique is a long journey. For most of us, it'll take years before we stand out in a crowd. And even then, the satisfaction is short lived on our path. But despite the myriad of obstacles that get in our way, changing how your body looks and works is one of the most rewarding things you can ever do.

However, even for the most passionate among us, this can get pretty boring. Like it or not, to build the most mass and strength, you need to focus on the money exercises we're all familiar with.

In the long run, things can become a bit repetitive. And, while there's no denying that the basics will always work, if we get bored with our training and lose some passion for it, our gains will suffer.

So, once in a while, it can be fun and mentally refreshing to do a training session where unconventional lifts are thrown in. Obviously, we still want exercises that'll have a positive physiological and neurological effect; we're not just in the gym to have fun, you know!

With that thought in mind, here are some odd lifts that you might enjoy.

The One-Arm Curl and Press

This exercise is fairly simple, albeit not that easy. It's a great overall upper limb (biceps, triceps, forearms, and shoulders) builder, and by increasing shoulder stability, it's also very effective at preventing shoulder injuries.

Start the movement with a barbell on the floor and your feet somewhat staggered, with the contralateral (opposite to the working arm) leg slightly forward. Grab the bar in the middle and perform a concentration curl.

Once the curl portion is completed, tuck in your elbow tightly to your body and stand up, bringing the bar to your shoulder. Take your time to stabilize it and press it overhead. The key is to stay tight at all times. Keep your elbow close to your body, spread your lats, and grip the bar as hard as possible.

Trust me, when done properly, it's very effective.

This exercise was invented by George Hackenschmidt, a Russian wrestler that dominated the sport in the early 1900s. Back then, they didn't have a lot of equipment to work the legs. The lack of squat stands rendered the squat unpopular, and while the deadlift is a great exercise, it targets the posterior chain more so than the quads.

So, "Hack" invented the hack squat – a deadlift variation that puts a lot more stress on the quads.

To perform this lift, stand with your heels on 25-pound plates. Hold the bar behind your body and keep that position while squatting down, staying as upright as possible. Then stand up in a straight line (even trying to go up and back instead of just up).

This exercise might be difficult for those with poor shoulder mobility or a shoulders-forward posture.

The Power Snatch from the Hang

This is the most speed-oriented Olympic lift, and despite its complex look, it's actually fairly easy to learn.

The objective is to lift the bar from your knees to over your head in one powerful motion. To be able to do so, you must respect these three coaching points:

1. Jump! To quote the great Canadian coach Pierre Roy, "The snatch is a jump with a bar in your hands."

2. Keep the bar as close to your body as possible during the whole lift. This means that the bar should almost brush your torso on the way up.

3. Maintain a "beach position" (lower back arched, chest puffed out, and head up high) at all times.

Besides being a very fun lift to perform, it has several benefits ranging from building up your overall power, to making you more adept at absorbing an external force.

This is the user-friendly cousin of the hang snatch. It's easier to perform explosively because even though you're using only one arm you're still jumping with both legs!

The same three rules that apply to the hang snatch hold true here, too.

Once you're advanced and stable, you can even perform the lift using a barbell.

The Continental and Press

No, this exercise doesn't refer to the breakfast or the dance. It owes its name to the fact that back in the early days of competitive lifting (late 1800s to early 1900s) there were two accepted techniques when it came to what we now know as the clean and press/jerk.

In England, the recognized technique was called the "clean" simply because the bar had to be lifted "cleanly from the body" without touching it. In continental Europe, they allowed the bar to touch, or even rest, on the body. So, this technique became known as the "continental."

You basically deadlift the bar to the middle of your legs and rest it there. The next step is to use a powerful hip swing and leg drive to bring the bar up to your shoulders. You then proceed to push, push press, or jerk it. To give you a better idea, a lot of strongmen use this technique in the log clean and press.

We could also call this lift a "strength clean" (although, as we saw earlier, the term "clean" doesn't rely apply) because it relies more on strength than power.

Regardless of what you call it, it's a great exercise for a number of sports, especially those of the combat variety.

You're now equipped to laser cut yourself some new calves and give your training a spin on those occasions where it's just the same old shit but a different day.

Once again, if you have any requests, don't hesitate to send them my way.

Tag this onto the end of arm day and you'll get the best pump of your life... and stimulate new muscle growth.
Arms, Tips, Training
Christian Thibaudeau July 9 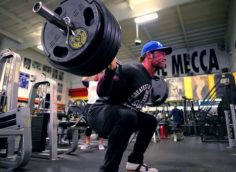 You need it, but it can also wreck you as you accumulate more years under the bar. Here's how to manage it.
Powerlifting & Strength, Tips, Training
Eric Bach December 27

Training to be explosive is a triple win: you get stronger, bigger, and leaner at the same time. Here’s how to do it.
Bodybuilding, Powerlifting & Strength, Training
Lee Boyce July 31