Impressively rounded delts impart a dominant aesthetic. And you only get this look with significant hypertrophy of all parts of the muscle.

If your progress has stalled despite progressive overload, consider landmine loading. Why? Because of the semi-constrained bar path, variable resistance, and angled force-vectors.

But we'll save the nerdy stuff for later. First, let's look at the four landmine exercises you need for capped delts.

Even folks with banged-up shoulders will typically tolerate this one well. The landmine's constrained path avoids end-range flexion, and the half-kneeling position trains the stabilizing musculature.

Keep a ridged trunk and you'll feel it in the midsection. Use a folded towel or foam pad under your knee. A band can be added to enhance the resistance at the top of the press to address the "mismatch" between the pressing strength curve and variable resistance. (More on that below.)

This is the poor lifter's lateral raise machine. Start by orienting your body slightly inward, toward the barbell, with the business end aiming at the hip joint of your outside leg. The constrained path of the bar provides some guidance through the motion.

Brace your non-working arm on your thigh and keep your torso motionless. Rather than standing right beside the sleeve of the bar, orient your body slightly toward it. This will help you better connect with the posterior deltoid and de-emphasize the rhomboids and middle trapezius. If you find yourself lifting your trunk, allow more bend in your elbow.

There was a time when upright rows were said to cause shoulder "impingement." You can file this misinformation away with what you learned about the dangers of dietary cholesterol from whole eggs or the health hazards of creatine.

These exercises will effectively hit all parts of your deltoids. Exercise order shouldn't much matter for hypertrophy, but placing the compound, half-kneeling press first may be advantageous for strength gains.

Shoot for 3-5 sets of each with a weight that allows for 8-12 reps. On the final set, hit failure or at least flirt with it. And don't shy away from high frequency. "Shoulder day" can be two to three times per week.

Although cadavers and imaging studies show that the deltoid has seven parts, we classically divide the muscle into anterior, posterior, and middle deltoid. The actions of each part of the delt should inform your exercise selection.

Landmine exercises use a barbell and plates as a loaded lever. Landmine training offers some of the best features of machine-based training with the accessibility and versatility of free-weight equipment.

When an athlete performs an exercise using the landmine, the lever-system imposes physical guidance to the movement. The loaded end of the barbell follows a curvilinear path. The arc of this path is determined by the length of the bar and the amount of angular motion undertaken in the exercise. Well-implemented landmine exercises harness this constraint to dial in proper form.

By facing the landmine, the curvilinear path of the barbell imposes constraint to movement in the anterior-to-posterior plane of motion, facilitating unique pressing exercises such as the half-kneeling landmine press.

Lifting the landmine while standing beside it will constrain movement in the medial-to-lateral plane, useful for the landmine lateral raise and landmine bent reverse flye.

A strength curve describes the neuromuscular system's changing ability to produce force through a specific motion range. In movements with a pronounced strength curve, the maximum load you can successfully lift is limited by the weakest point in the motion – the sticking point.

When you perform a true repetition maximum (RM) with free weights, the portion of the lift that was maximally or near-maximally challenged was likely narrow and localized to the sticking point. Throughout the remainder of the range of motion, maximum capacity is greater and the resistance is more easily overcome. This phenomenon has been described as a "mismatch" between the applied torque and the resistance.

Lifters have used machines designed with levers and cams for decades to remedy the mismatch between human strength curves and constant resistance from free weights. Variable resistance is characteristic of these training devices that modify the amount of resistance you experience to correspond with the movement pattern's strength curve.

Single-joint shoulder exercises that begin near mid-range, such as the bent reverse flye and upright row, are also well suited to landmine variations.

The resistance imparted by the landmine acts perpendicular to the barbell – pushing down and back into the lifer. Throughout the arc of the exercise, the resistance has horizontal and vertical components or "force vectors."

These angled force vectors may result in superior carryover from the gym to sport for performance training. For strength and aesthetics, we can harness these force vectors to train our delts more efficiently at certain angles.

During traditional dumbbell lateral raises or reverse flyes, a good coach might cue you to "push the weights out to your sides" as opposed to cueing you to "lift" them.

With the landmine variations, the horizontal component of the landmine's force vector provides resistance to "pushing the weights out," implicitly improving your form. 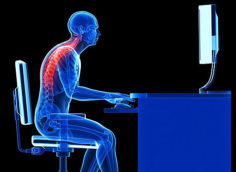 Stop jumping into your pull-up. Get strong in the bottom position with this method. Check it out.
Tips, Training
Kelli Keyes & Abby Keyes February 1