Let's say your plane crashes and leaves you stranded on a deserted island without even a volleyball named Wilson to talk to. Or perhaps your home gets buried under twenty feet of snow and you can't leave the house until it melts. Or maybe you move to a country where weight training has been banned because, as everyone knows, lifting barbells and dumbbells turns people into big dumb animals who think about nothing but sex and protein intake. How are you going to train?

Okay, maybe the above situations seem improbable, but I'll bet you've been stuck in a hotel room without a gym nearby or have been itching for a workout on a holiday when your gym has, for some insane reason, locked its doors. Never fear, you workout addict, because below is a training program that will leave you wondering if you ever need to go back to the gym at all!

I've provided thirteen exercises that'll make a great total body workout! They all have the potential to provide you with muscle fatigue in the absence of external loading – other than your own bodyweight, of course! And since we're not able to manipulate the loading in the same way we would in a gym with a barbell or dumbbell, we're going to have to accept using a greater range of reps on some exercises. Provided you can do at least five reps, I believe you're going to be okay. If you can do more than twenty or thirty, you may want to find a way to make the exercise more difficult.

Knee Up on the Ground 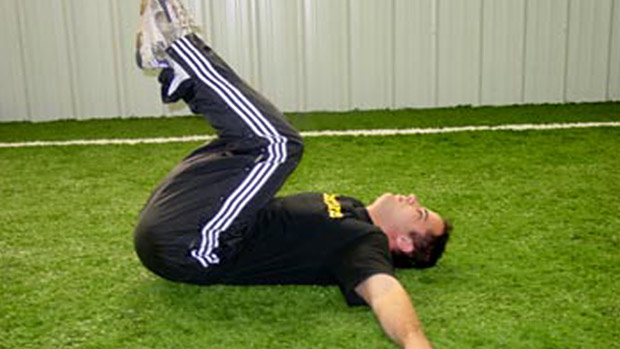 Lie on your back with your arms out on the ground at 90 degrees to the trunk. Prior to starting each rep, "set" the pelvis, then lift, aiming, to hold that pelvis position throughout. Simply lift the knees towards the trunk and return under control.

Curl Up for Rhythm 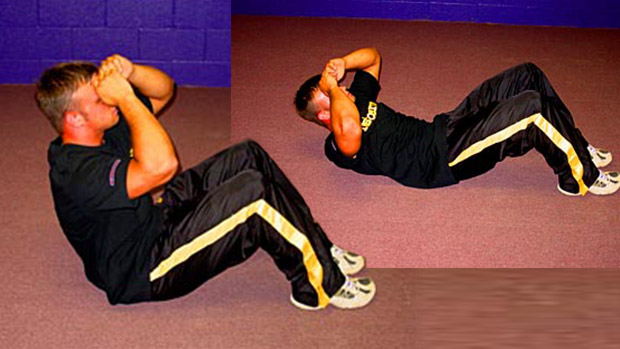 A curl up is really the same thing as an old fashioned sit-up. Lie on your back on the ground, knees bent to about 90 degrees and feet flat on the floor. Your feet are not to be anchored under anything. Sit up or curl up the trunk, ideally to a full sitting position. I want you to do sit-ups for numbers, i.e. looking to increase work capacity, but not allowing total fatigue or excessive slowing of movement. If the consistent speed of movement drops, terminate the set.

Wrist to Knee Curl Up 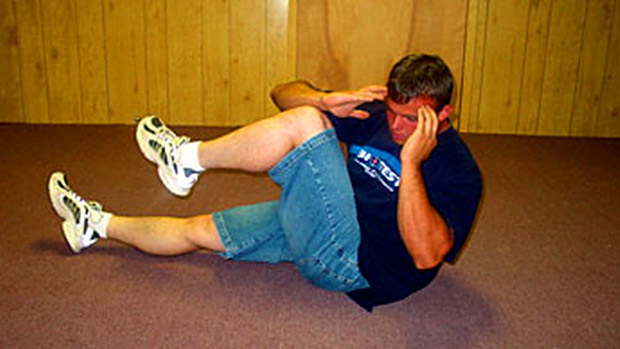 Lie on your back on the ground, each hand touching its own side of the forehead with the fingers, elbows out at 45 degrees. The elbow angle is not to change during the exercise. Starting with legs out straight, raise (flex) the trunk and one leg simultaneously. As you continue into the flexion, rotate the trunk so that the elbow (or preferably the wrist) on the opposite side to the knee that's been lifted touches the opposite knee. Then return to a fully straight body position, repeating the next rep on the other side. 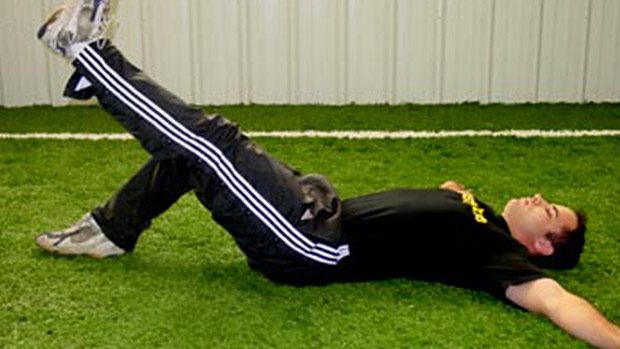 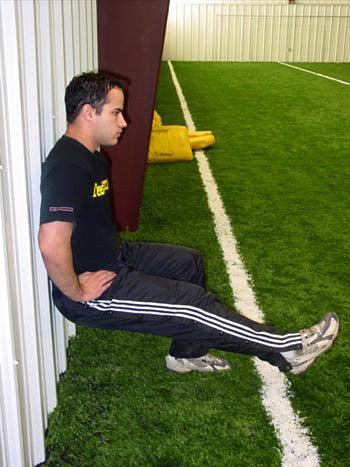 Place your feet shoulder width apart, about two feet out from the wall and lean your back against the wall. Bend your knees to a half squat position. This is position one. After a specified time, lower down to position two, about two inches lower. After the specified time, lower another two inches down to position three. Your thighs should be about parallel by now. Use another two lower positions, with position five being about as far as you can bend at the knees.

How long is the specified time? Start with somewhere between ten and twenty seconds per position, adding five seconds per workout. The five positions done with no rest between them constitutes one set. If you're finding this too easy or notice one leg doing more work than the other, do it one leg at a time. The challenge here with the single leg ski squats (apart from the obvious of having twice as much loading on the leg!) is keeping the hips parallel to the ground, as they would be in the double leg version.

Unlike other forms of the lunge, the static lunge requires that you keep still, i.e. the forward foot remains planted on all reps; no leg switching between reps or walking. 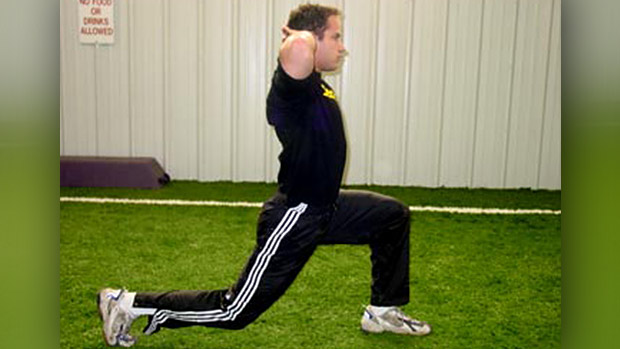 Step out with one leg. Go down until the knee of the rear leg is almost on the ground. The length of the stance can be assessed in general by ensuring that the tibia and fibula (the lower leg) of the lead leg remain relatively vertical throughout the lift. In other words, the knee shouldn't exceed (either way) the toe or heel. Aim to keep the trunk vertical throughout. If you have a bilateral imbalance, respect the weak side rule. Newbie translation: If one leg is weaker than the other, always start with the weak leg and do the same number of reps for the stronger leg.

Stand on one leg, bending the other leg at the knee up behind the body until the knee is bent to 90 degrees. Both upper legs are still side-by-side and the hands are on the head or the waist. Now bend the knee you're standing on with the intent of going down until the bent knee is almost touching the ground. You can lean forward at the waist as much as you want.

For most, this range won't be possible in the first instance, so a shorter range is okay provided that you work to improve the range over time. Try this one with dumbbells once you get back to the gym! 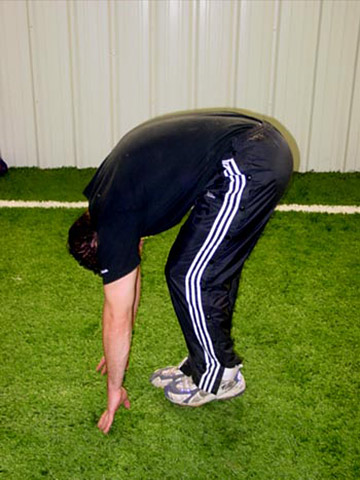 Stand on one leg, have the other foot off the ground, but kept roughly parallel with the leg doing the supporting. Bend the knee of the supporting leg slightly, but the knee angle shouldn't change during the exercise (get a partner to watch for this, as it will be tempting to cheat!). Now bend at the waist, allowing the back to round and reach slowly towards the floor. If your range allows, touch the floor with the fingertips and return to the starting position. Use a speed of three seconds down, one second pause at the ends, and three seconds up.

You may struggle with balance, but persist – you'll also be developing the muscles in the sole of the foot! The first time you do this you may find you're touching down with the non-supporting foot regularly to avoid falling over. This is okay, but in later workouts, try to minimize this. Don't be surprised if you can only do five reps on day one! Look to increase the reps from workout to workout.

Stand on one leg and squat as far down as your strength or flexibility will tolerate. You may need to hold on to something at first. Generally speaking, I encourage you to pursue range over reps, but initially use a range that allows you to get at least eight to ten reps.

Handstand Push Up Against the Wall 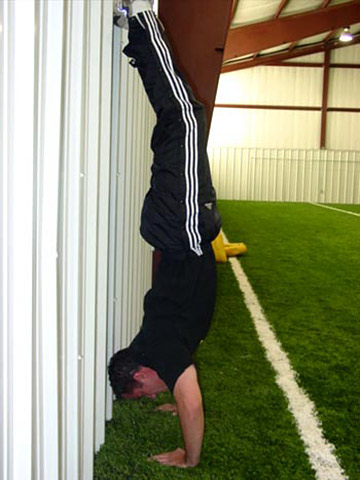 This is a great one for the shoulders, provided you have the circulatory system that can tolerate the blood going to the head! Place your hands on the grounds about a foot from the wall and kick up into a handstand so that your heels are on the walls. Once in place in this handstand position, lower your body down until your head is almost touching the ground, then push back up.

If you can't find an appropriate place to do this, you may need to go with a compromise that involves your lower body (knees) being in contact with the ground. You'll find a waist high railing in most places in which to do this. Using a slower tempo will help make up for the lack of full load if your lower body is touching the ground. Note: If you want to emphasize the biceps, use a narrow grip with your palms facing toward you. For more back work, use a wider grip with the palms facing away.

I'm sure you know how to do a push up! If your strength levels are such that you're capable of doing reps in excess of twenty, you may want to have someone place some pressure on your upper back or place your feet up on an elevation such as a chair or bed. Again, using a slower, controlled tempo will help too. Note: To really target the triceps, keep the hands close together on the floor.

Place the ball of one foot on the edge of a stair or whatever step is handy and push up on to your toes using the calf of that leg only. Lower down to a full stretch and then repeat. Don't forget to do the other leg!

While a bodyweight only routine may not be perfect, it'll get you by until you can get back to the gym. Performed correctly with attention to form and tempo, you may even find yourself sore the next day despite the lack of barbells and dumbbells! Give it a shot!

Do you lose muscle and get weak when you're trying to get lean? It doesn't have to be that way. Follow these smart guidelines
Diet Strategy, Fat Loss Training, Powerlifting & Strength, Training
Paul Carter September 7

Train your maximus, but don't forget about your medius. Hit the upper glutes hard with this unique exercise variation.
Glutes, Legs, Tips, Training
Nick Tumminello May 1

Can you really gain 10 pounds of muscle in 6 weeks with German Volume Training? Many people have. Here's how to do it.
Tips, Training
Charles Poliquin July 19