The deadlift, more than any other lift, is subject to your natural leverages.

If you have a long torso, short femurs, and long arms, you’ll crush conventional pulls because when you set up, your torso can be much more upright and you’ll lock out just above the knee.

But a short torso, long femurs, and long arms? A wide sumo fits you perfectly.

But what if you have stubby T-Rex arms? In terms of leverages, frankly, you’re pretty much screwed. There’s really no deadlift form that suits you, and most deadlift routines were not made with you in mind.

Thanks to my own T-Rex leverages, I’m not the strongest deadlifter on the planet. While my 725-pound pull is respectable, men my size have pulled almost 200 pounds more.

However, I’d argue it’s because I’m not built to deadlift that I have more to teach you about pulling than some genetic freak, because deadlifting never came easy for me. So if you’re of similar less-than-stellar pulling stock, the following tips are for you. 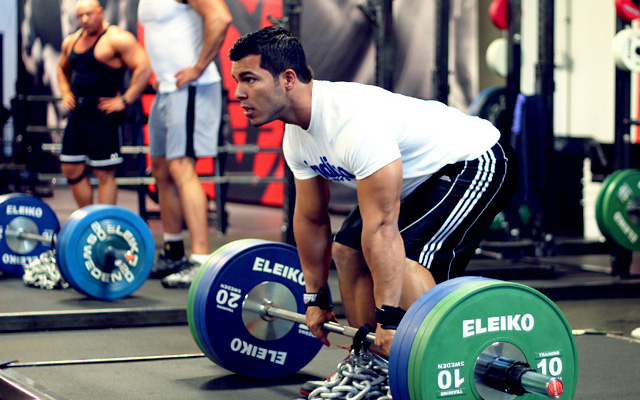 If you’re not built to deadlift, your best bet is to pull conventional with low hips.

Sumo will crush your hip external rotators and adductors due to how low your hips have to start, and conventional style DL’s with high hips will only lead to a slow pull since you can’t develop a ton of speed off the ground with your hamstrings starting in a big stretch.

Pulling conventional with low hips allows you to engage your quads more in the start of the lift since your knee will be at about the perfect angle for your quads to produce maximum force: about 100 to 130 degrees. With proper training you should be able to get the weight moving fast in spite of your hips being a mile behind the bar.

The two best ways to train your quads for the deadlift are with high-bar paused squats and paused front squats with your feet in a deadlift position. For both, let the weight settle at the bottom to dissipate the stretch reflex (like a deadlift) and then focus on accelerating the weight from the bottom position.

For greater quad involvement, your weight should be on the balls of your feet or mid-foot when coming out of the bottom. Then transition to your heels as you lock out. Practice getting this same weight shift when you pull.

For someone ideally built to deadlift, the entire lift is hip-dominant – think “push through the heels” throughout the movement. But if you’re a Mr. Stub-Arms pulling with low hips, the best way is to shift your weight forward slightly for more quad involvement to get the bar moving and then lean back onto your heels as the bar reaches your knees.

It will feel awkward until you get used to it, but it’ll pay off big time in the long run by dramatically improving speed off the floor.

If you are built to pull, this advice is still for you. However, instead of using the weight shift described, keep the weight back on your heels. Paused squats done with your deadlift stance mimics the mechanics of a deficit deadlift, without nearly the same strain on your back. These will keep your deadlift max moving without detracting from the rest of your training.

I love partials for deadlift training. A rack pull or block pull from at or just below knee height gives you the same benefits of the full deadlift without many of the drawbacks. It lets you feel heavier weight, ingrains the necessity of pushing through your heels to lock the bar out, and presents less opportunity for your back to round, making it a safer lift overall.

Since you’ll be more upright with the bar at knee height rather than from the floor, there will also be less shearing force on your vertebrae, making it a safer training lift and reducing recovery time (except for your traps, which will be murdered).

For you more gifted folks, the reduced recovery time from partials will also pay dividends, leaving more “juice” in your low back for getting your squat up. It’ll also acclimate you to feeling heavier weights in your hands, which is likely your biggest hurdle since you don’t have any biomechanical impediments holding back your pull.

Partials aren’t just about ego lifting. They helped me put 80 pounds on my deadlift in 8 months, when it had previously taken me two solid years to add a mere 50! Furthermore, Andy Bolton, the first man to pull 1000 pounds, uses block pulls from just below knee height extensively in his deadlift program. 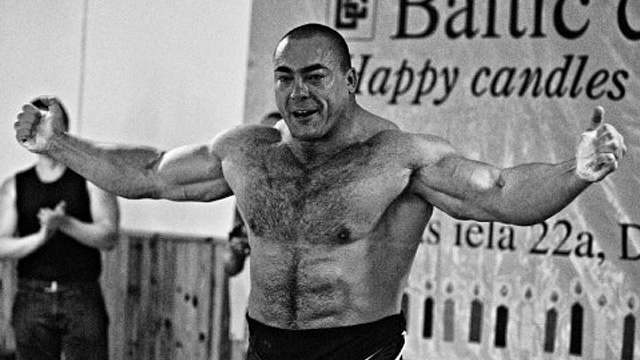 The popular position that the squat and deadlift are enough to strengthen the abs have done your lifts a disservice.

If your back has ever rounded while deadlifting, strengthening your abs will make the deadlift safer and the added spinal stabilization will put pounds on your max.

I recently had the honor of meeting Mark Chaillet, who pulled 855 pounds for 3 and 900+ for a single in his prime. When I asked him for his best advice on how to get a huge deadlift, he said to work your abs hard.

As an example, Mark said he’d done decline sit-ups for reps with a pair of 100 pound dumbbells behind his head. Travis Mash, an 800+ deadlifter at 220 pounds, echoed these sentiments and had the ab strength to front squat 630. Then there’s Konstantin Konstantinovs, owner of a 939 raw deadlift, who does ab wheel rollouts with 165 pounds on his back.

Not only will a stronger set of abs mean a bigger deadlift, it’ll also mean a safer deadlift. The key to breaking a deadlift off the ground is being able to brace your spine, since it naturally wants to round to shorten the distance between the bar and your hips.

If your abs are strong enough, your lumbar spine will remain in extension as the weight starts moving. If you lose lumbar extension off the floor, it makes the lift much more dangerous, not to mention making it almost impossible to lock out heavy weights.

Most popular deadlifting workouts are once-a-week extravaganzas. The problem with these approaches is that they assume you can handle a ton of pulling volume with no ill effect.

Try using the following approach. It’s tailored to your specific T-Rex weaknesses, and allows you to get your max up while leaving your back fresher for the rest of your weekly training:

* As Many Reps As Possible

If you’re not built to pull, you just need to break down the lift to see how you can overcome your weaknesses, and then approach your barriers with a scalpel rather than a sledge hammer.

Simply training harder will only fatigue your back, stall your progress, and risk injury. Training smarter, on the other hand, can have you pulling huge in no time.