I’ve never been the type of coach who feels he’s figured everything out. Sure, some things are set in stone:

Outside of this handful of things, I tend to fall in the “it depends” camp and take the middle ground on pretty much every issue.

One of my biggest pet peeves is when I hear a coach wax poetic about how their way is the only way to teach a specific lift. Or worse, they insinuate that you’re a moron if you don’t follow their way of doing it. There’s almost nothing more dubious in strength and conditioning than the words: everyone, always, and never.

Whenever I hear someone use those three words in a sentence, my bullshit meter immediately kicks into high gear. My rule is simple:

Unless your name is Gandalf, get over yourself. He’s an all-knowing wizard and even he’d agree that every exercise should be catered to the health history, needs, goals, and ability level of every lifter.

There’s no one way to do anything. To that end, let’s talk about the deadlift.

First, What I Don’t Want to See

There’s a lot that can go awry when deadlifting. It requires practice, attention to detail, and technical mastery to perform well and to stave off injury.

The internet likes to debate semantics regarding foot position, hand position, neck position, barometric pressure, and a myriad of other things that may or may not matter when it comes to enhancing deadlift technique and performance.

Could we make the case for what’s optimal with any of the above if someone’s goal is to lift as much weight as possible? Sure, I guess. Still, it’s a bit of a stretch to say, “This one way of doing this one thing is going to have positive applications across the board for every person at all times.”

That said, there are two things I’d prefer not to see with the deadlift:

That’s pretty much it. However, getting into the weeds a bit more, let’s discuss how you can figure out which deadlift variation is right for you. Because choosing the right variation to match your specific injury history (and anatomy) can make all the difference in the world. 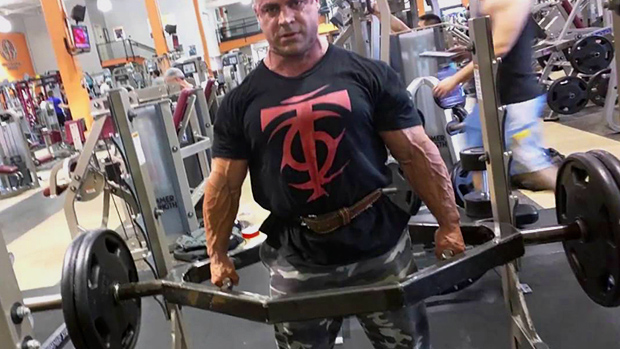 I’ll preface this by saying 90-95% of my clients use nothing but the trap (hex) bar when deadlifting. The only people who have to use a straight bar (and pull from the floor) are competitive powerlifters and Olympic lifters.

What I love about the trap bar is the lifter’s center of mass is inside the bar, which allows for a more upright torso angle and places less shear stress on the spine. And because the handles are higher (and to the sides) it’s a much more complementary variation for those with hip, ankle, or T-spine mobility restrictions.

In short, the trap bar is a more user-friendly way of deadlifting and tends to be the best option for most people most of the time.

“But Tony, does this mean you hate regular barbells? You probably hate kittens, too, right?”

I am not anti-barbell (and I adore kittens). I just don’t fall into the mind-trap that one MUST use a traditional barbell to reap the benefit of a particular exercise.

So which is the better variation: conventional or sumo stance?

A fair number of people have been programmed to think the conventional deadlift (narrower stance, hands outside knees) is the “real” way to deadlift, and anything other than that is cheating. I don’t have enough eye rolls to give when this argument is made.

Is bench pressing with a wider grip cheating? I’m confused.

Anyway, biomechanics aside (sumo isn’t cheating, it’s just different), some people aren’t built to perform a conventional deadlift well. No amount of coaching and grandstanding is going to fix it.

Anatomy matters. For some context here, take a look at this photo of two separate hip structures: 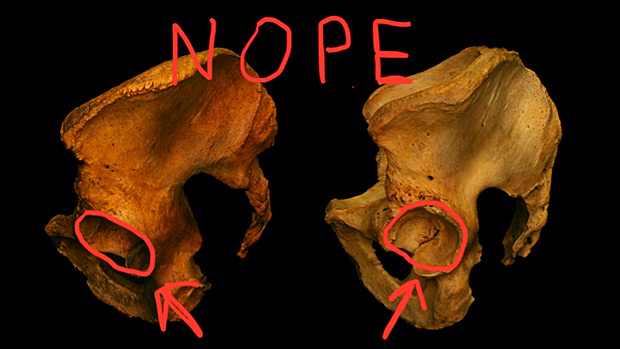 Are we to assume both of these individuals would do best deadlifting (or squatting) the exact same way? CAN they both conventional deadlift? Sure.

However, forcing the person on the right (with a more retroverted hip socket) to adopt a conventional stance is likely going to make their hips feel like they’re being eaten by fire ants. Their hip structure “implies” a wider, sumo stance may be more appropriate.

Now, the last time I checked, none of us have acquired mutant X-ray vision. So how the heck are we supposed to ascertain someone’s hip structure to figure out which stance will be most suitable?

Popularized by spinal researcher, Dr. Stuart McGill, the hip scour is an easy, non-invasive way to figure out which stance will (probably) feel the best and do the best job moving forward for each lifter. Here’s an overview from Dr. John Rusin:

To be honest, we don’t even have to go THAT far down the rabbit hole.

To summarize: Step one to fixing your deadlift is finding the variation that allows you to get into the best position possible.

A few years ago, a woman reached out to me for a deadlift technique audit. She contacted me because she loved deadlifting and the idea of lifting heavy things excited her. However, she was always getting hurt and living in a perpetual state of low-back discomfort.

She had always performed conventional deadlifts because that’s what she was taught and that’s what she’d always done. After discussing her injury history and taking her through the hip scour above, I had an idea of what the “fix” would be: adjusting her stance. 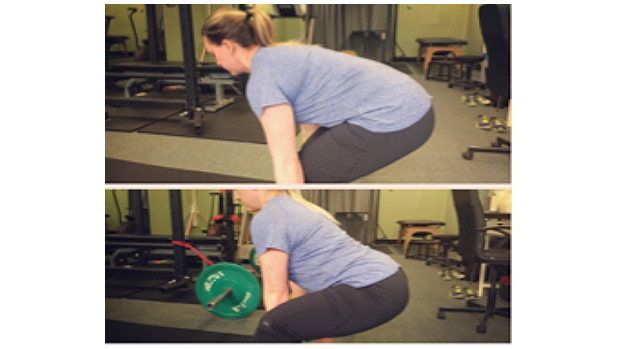 The top pic is a conventional stance. You can easily see why her lower back was routinely bothering her. No amount of me directing her with “chest up” cues was going to fix that. Yes, I realize I could’ve just elevated the barbell on blocks, but I was curious about something.

The bottom pic (taken five minutes later) was a modified sumo stance. Here she was able to assume a more upright torso – with less shearing on the spine – and as a result had zero discomfort pulling from the floor with the same amount of weight.

Instead of force-feeding one way of doing the lift, I adapted it to cater to her needs and ability level.

Here’s a “live” deadlift assessment I did with Dani Shugart at T Nation headquarters. Below, I’ll break down the most important cues from the video.

It’ll behoove you to have your hips as close to the barbell as possible (shorter moment arm to overcome) when setting up to deadlift. (Video: 7:15 mark).

But when a lot of lifters hear “hips close to the bar” they tend to squat down toward the floor. In theory this sounds like a good idea, but in actual practice it INCREASES the horizontal distance from the bar… not to mention placing most of the tension on the quads.

Note: Some lifters are very successful with this approach. I’m not implying it’s wrong per se. But it’s the exception, not the norm.

Moreover, if the hips are set too high, this increases the vertical distance from the barbell and also tends to push the shoulders forward in front of the bar, which results in a cascade of events that’ll almost always place more stress on the lower back.

There’s a bit of a Goldilocks scenario here. Where the hips end up is a bit different for everyone based off their anatomy. But I’ve found that if I say “armpits over the bar,” followed by “find your hamstrings,” that helps to get each lifter in just the right position to have an efficient line of pull to maximize their ability to lift the weight safely and not make my corneas perpetually bleed.

To simplify things further, I’ll say “push the car door shut with your hips.” This enforces the hinge pattern (not squat) and helps to better engage the hamstrings.

2. Wedge and Connect the Bar

When many lifters initiate their pull, they immediately lose position and their lower backs will round or their hips will rise too soon. The “lifter’s wedge” helps to counteract this. (Video: 7:50 mark.)

What should happen is that when the lifter bends over to grab the barbell, he or she will use it as a counterbalance to help get their weight back (armpits over the barbell), protect their lower back, and increase full-body tension.

To use an impressive reference point, Chris Duffin of Kabuki Strength often reinforces the importance of the wedge and how crucial it is to ramp up full-body tension. He needs a minimum of 405 pounds on the bar to perform it effectively. Anything under that and the barbell comes off the floor before he even initiates his pull.

Furthermore, there’s a common cue used by many coaches that coincides with the wedge: Get slack out of the bar.

Remember in The Matrix when that creepy kid in the Oracle’s waiting room bent the spoon with his mind and then looked at Neo and said, “There is no spoon.” And then Neo, flabbergasted as shit, was like WTF?

That’s what I think most people feel like when they’re told to get slack out of the bar.

What does it even mean? In short, all it means is connecting the bar. What we’re trying to do here is connect the barbell with the inner cylinder of the weight plates. (Video 9:00 mark.)

As you bend over and grab the barbell with each hand and begin your wedge, you want to hear two clicks on each side – this is the barbell “connecting” to the plates. It’s an integral component of ensuring better tension prior to the pull.

3. Squeeze the Orange in Your Armpits

Speaking of connection: Your lats are what connect YOU to the barbell. It helps to think of your arms as two ropes. You want to avoid any slack in those ropes. Ensuring you have your lats on throughout the execution of the set helps to accomplish this.

The more kinesthetically-aware peeps in the crowd may be able to turn their lats on merely by someone telling them to do so, but most people can’t.

Using the cue “squeeze the orange in your armpits” has been a game-changer. Try it. (Video: 9:30 mark.)

4. Push the Floor Away

Lastly, as oxymoronic as it sounds, the deadlift is very much a pushing exercise rather than a pull. (Video: 11:24 mark.)

A key component of the deadlift is to put force into the ground. This helps prevent the hips from coming up too fast and to maintain full-body tension. Catching onto a theme here?

Ideally, we want to see a synchronous action between the hips and shoulders – they move simultaneously – as one initiates the pull (er, push) off the ground.

There are plenty of nuances to consider when it comes to deadlifting performance. However, there are actually more commonalities than most recognize. Give some of the suggestions above a try. I bet you’ll notice an immediate improvement.