Of all the things you can do to make your workouts more effective for building muscle and burning fat, adding volume ranks at the top of the list.

It's as simple as the SAID principle, which states that your body will Specifically Adapt to the Imposed Demand. When you increase the volume of your workouts your body has no choice other than to adapt—adapt or die. Okay, I'm being overly dramatic, but you get the point.

Based on recent research, your body adapts in two ways. First, it upregulates protein synthesis so your muscles get bigger.(1) Second, it increases your anabolic hormones by ramping up the production of growth hormone and almighty Testosterone.(2,3) Growth hormone burns fat and builds muscle, and Testosterone is, as you know, the most powerful muscle builder on the planet. Increasing both results in a leaner, more muscular physique.

Therefore, a logical question arises: How can you best increase the volume of your workouts while keeping the rest periods as brief as possible? I'm going to take the advice of big-schnozzed Ringo Starr and tell you "with a little help from my friends."

For any the following methods I recommend using a weight you could lift 10 times while fresh. This load is sufficient to recruit a large number of muscle fibers, but it's also light enough to perform quite a few reps in about an hour, provided you do it right.

Here's how you do it right.

Pavel Tsatsouline is known for advocating training methods that work. Not only that, but we have him to thank for the explosion of kettlebell training in this country. One of his best methods is the ladder system, where you start with one rep of an exercise and keep adding a rep with each set until you reach 5 reps.

At that point, revert back to one rep and keep the system going until you reach a target number of reps, say, 50. This is a sure-fire way to cram as much volume as possible into a short amount of time.

For ladders, Pavel recommends starting with a load that you could lift anywhere from 5-15 times while fresh. But as mentioned above, I've had success with a happy medium. My clients use a weight they could lift 10 times while fresh to start the following sequence.

After reaching 5 reps, revert back to one rep and start the sequence over. This entire process should be repeated 3-5 times.

I'm a fan of this system because it manages fatigue just about as well as it can be managed. Once you start getting tired, you pull in the reigns and get back to one rep. This allows you to knock out more reps than you could have if you dropped the hammer and burned yourself out on the first few sets.

The Austrian Oak, Arnold Schwarzenegger, is known for saying that to build big lats you should do wide-grip pull-ups for 50 reps (per session), no matter how many sets it takes. For me, ladders will get you there the fastest.

Try it with any compound exercise that adds muscle where you need it most. Front squats for bigger thighs; deadlifts for a more muscular posterior chain; chin-ups or dips for a more massive upper body.

Cranking out 20 strict pull-ups is a feat that many have yet to master. That's a shame because it's a damn good test of relative strength (a measure of how strong you are in relation to your body weight), not to mention an incredible upper-body builder. Add in two ladder workouts each week with a target of 100 reps (10 cycles), and you'll impress the bikini-clad beach bunnies in no time.

When you perform back-to-back sets of the same exercise, your performance tanks in a New York minute. Protons accumulate, muscles acidify, and before you know it, localized fatigue has set up shop in your muscles.

Now you're relegated to using lighter weights, and unfortunately, you now have to wait for the dumbbells that Janice, the 40-something cougar in a leopard print leotard, is using to do side raises.

The solution to this problem, however, is simple. Alternate each set of an exercise with another exercise that works the opposing muscle group.

If you do an overhead press, throw in a set of pull-ups in the middle of your rest period. If you're working your chest, alternate it with a rowing exercise. And for squats or deadlifts, alternate either with an exercise for the upper body: a deadlift with a push press or a squat with a dip, for example.

The beauty of antagonist training is it allows you to maintain your strength for a longer time. You'll ultimately build more size and strength since you recruit the most muscle fibers when the load is highest.

Now I know that alternating between a deadlift and push press isn't really antagonist training, but the alternative idea of pairing the leg extension with a leg curl just doesn't smell right in my training book.

Start with a weight you could lift 10 times while fresh for each exercise and do the following routine three times per week for three weeks.

This routine will build total body size and strength faster than other workouts that take twice as long and use three times as many exercises.

For a progression, focus on adding more reps to each set when you repeat the workout. In essence, you end up doing more volume in the same amount of time. This "escalating density" approach works great for building muscle and it's what made Charles Staley's EDT system such a fan favorite.

The last method for augmenting your training volume is based on the system I outlined in my latest book, Huge in a Hurry. For the purposes of this article, you'll start with a weight that, once again, you can lift 10 times while fresh.

You'll do as many reps as you can with maximum acceleration until your speed slows down noticeably. At that point, you'll take a brief rest before doing the same with an antagonist exercise, or an upper/lower body exercise pairing. Continue knocking out as many fast reps as possible until you reach 50 for each exercise.

This progression works differently than you're probably used to seeing. Initially, you'll focus on adding more reps to each set. This will come quickly due to strength adaptations that occur with fast lifts.

Once you can perform 15 reps for the first set, it's time to increase the load so you fall back around the 10-rep range for your first set.

Make no mistake about it: if you wanna grow, you've got to add volume to your workouts. These volume-boosting methods will add size and strength to your frame while upregulating the hormones that help your body burn fat. Feel free to mix and match the three different methods I outlined in order to keep your training fresh.

After a few months you'll be sportin' a body that's as strong as it looks! 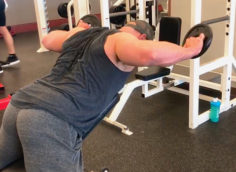 Build your shoulders and full-body strength with one exercise. Here's how.
Powerlifting & Strength, Shoulders, Tips, Training
Drew Murphy May 9