Strength athletes are a studly bunch. We’re consistent, disciplined, structured, and often blessed with a high tolerance for pain. We also tend to sport a bit of an ego, a result of having fellow gym rats stare at us in fear and admiration. That ego, however, can get us into trouble, like when it comes to cardio.

Strength athletes tend to embrace cardio the way a housecat does a cold shower. Some simply choose to avoid it, often resulting in a beastly strong individual that gets winded climbing one flight of stairs and whose gut more resembles a beer keg than a six-pack.

Others embrace cardio. This group studies up, and learns that “conditioning” is better for them than cardio. So they add a variety of HIIT workouts and brutal circuits and complexes.

The end result is usually an in-shape and physically fit individual that finds himself standing on the bronze medal platform instead of the gold. What are they doing wrong?

That aforementioned ego is steering them in the wrong direction. A big ego is great in the weight room – the four-plate bench press gets all the looks, not doing 225 for six sets of eight with 30 seconds rest.

But the cardio/conditioning workouts that get similar nods of respect are not ideal for the strength athlete. And it all comes to down to energy systems.

According to the principle of specificity, our body reacts specifically to the stimulus we present to it. Training brutally hard for several minutes or longer with minimal rest is likely the best way to test what the body is capable of – but it’s not the best way to keep a strength athlete in shape, as it’s challenging a different energy system.

Strength athletes are kings of the phosphagen energy system. The phosphagen or ATP/CP system is a short duration system, usually lasting for about six seconds at full power before petering out completely by 30 seconds.

It relies on ATP (adenosine tri-phosphate) and CP (creatine phosphate) for fuel rather than oxygen. It takes 30-60 seconds for a moderate recharge of its fuel reserves, and 3-5 minutes for a near-full recharge.

The glycolysis system is a moderate duration system – it starts kicking in at around the 15-second mark, hits full-speed by 30 seconds, and then starts to fade significantly after about the one-minute point. It uses glucose as a fuel source, which can come directly from the blood and, if the activity is long enough, can be pulled from the stored glycogen in the muscles.

When operating anaerobically, the glycolysis system lasts less than two minutes and produces lactate, which is associated with an intense burning sensation in the muscles that most fitness enthusiasts are familiar with.

However, the glycolysis system can also operate aerobically, which doesn’t produce as much lactate, although the power produced by way of this pathway is generally lower and lasts about five minutes.

Note: The glycolysis system is sometimes broken into two almost separate systems (fast and slow glycolysis), but further discussion of them is beyond the scope of this article.

The phosphagen system is the butt kicker in the gym. This is the system that powers massive squats and benches, powerful shot puts and slam-dunks, killer knockout punches and kicks, and lightning fast 100-meter dashes.

While these things are all badass, they’re not really that hard – they don’t produce the same level of total body fatigue as something powered by the glycolysis system.

The glycolysis system is the king of conditioning. This powers the 400-800 meter runs, the 500-1000 meter rows, maximal push-ups for time, and five set drop-sets on the leg press.

Too much time spent training the glycolysis system will cause the body to adapt to becoming proficient at that system, which usually causes a shift away from optimum performance with the phosphagen system.

It’s no coincidence that the guy who wins the 100-meter dash in the Olympics is rarely the guy that wins the 400-meter. Likely, the most performance-affecting shift is an altering of neuromuscular coordination for that activity accompanied by a shifting of motor unit recruitment and muscle fiber make-up.

So what do we do?

We need to listen to our brain, not our ego. We need to focus on the phosphagen system.

To do so, here are a few very simple guidelines: 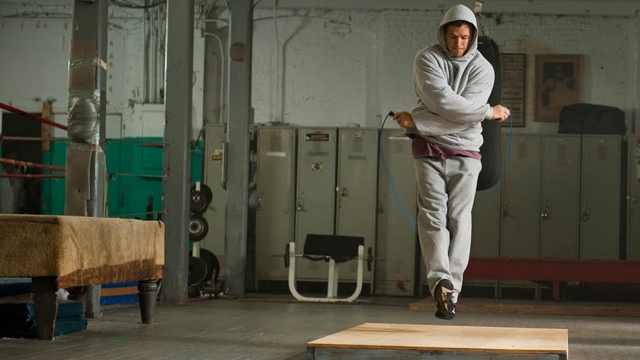 At my gym we have a challenge that’s 10 trips (about 35 yards) with the Prowler loaded to 90 lbs, performed for time. The guy who holds the current record is one hell of a hard worker and won’t quit, but he can’t squat 315 for a single. This is not the challenge strength athletes should be working on.

We have another Prowler challenge that’s a max weight pull for 10 meters using a harness. Guess who has that gym record? One of my powerlifting teammates.

Instead of a long and grueling event, it’s better to do a Prowler push of 5-20 yards (with longer distance use less weight) with 30-60 seconds rest, multiple times.

Of course this list is just meant to get you started. Apply the basic principles outlined here and you’ll be fine.

How you rest is up to you and the activity you’re performing. Some activities lend themselves to easy active rest like the Ski Erg, the rowing machine, or any piece of cardio equipment.

Generally, active rest should be no more challenging than a brisk walk. You need to be able to recover during the rest period, otherwise it’s too hard. At times the best rest will be simply standing still. If you’re pushing the Prowler for 15 yards hard with 30 seconds of rest, it makes no sense to do anything but just stand there and recover.

You can still perform some grueling glycolysis-based conditioning events if you want to, but they should be done rarely (once a month sounds about right) and simply as a test to see where you are mentally and physically. Don’t try to master that “test” by practicing it too regularly – you might ace the test but fail the class!

Putting it all Together

Perform this strength-training friendly conditioning 1-4 times per week, depending on your goals and time available. Those with weight loss or lofty conditioning goals should be on the higher end of the scale. Perform it after your regular strength-training workout or as a separate workout – it would likely have a negative affect on your training if performed before the main workout.

Keep the conditioning workout under 30 minutes total (15 minutes works well) including the rest time, and again, don’t feel like you’re going to die during the workout. That sensation is the glycolysis system pushing your ego to the limit.

Put the allure of being “pretty good” at everything aside and focus on your specific goals – becoming a stud in the gym, and someone that can lift heavy-ass weight repeatedly with short rest for a long period of time. Your physique, PRs, and your ego will thank you for it!