There were just four months to go before the contest, and we had to face a harsh fact: We'd made a lot of progress in the offseason, bringing up all of his weak points, but we still weren't there with his chest. A bodybuilding competitor is only as good as his weakest body part, and his chest was ... not good.

Worse, we were in the trim-down phase of his contest prep, with a state championship title on the line.

I had an idea for a chest routine – a chest assault, really – but I needed buy-in from Tim, the bodybuilder I was coaching. We really only had one shot, and if it didn't work, he was screwed. I was 90% certain it would, but couldn't shake my fear of that 10% chance it wouldn't. I asked if he was willing to roll the dice with an untested chest program.

"I would never second-guess anything you say," he told me. "If you think it'll work, let's do it."

I'm not blowing sunshine up your skirt to make you think you're getting something special when I say I rarely share any specifics of a client's program. First, he's a client, a paying customer. He's paying for a custom program, not something off-the-rack. Second, bodybuilding, whatever you think of it, involves competition, including rival competitors. If a rival has access to my client's custom program, my client has lost whatever edge he gained by hiring me.

I'm spilling the beans for three reasons. First, because I'm truly excited about this program. Second, because Tim is generous and willing to share his custom program with T Nation readers. And finally, because a T Nation editor badgered me until I agreed to give it up.

We started with a split designed to hit each body part once a week, with the exception of biceps (a topic for another day). It was important to give the chest a chance to recover from the onslaught of that single weekly workout.

As you can see, this isn't an out-of-the-ordinary routine for an advanced bodybuilder.

As I said, the weekly routine is fairly intense, but it's not unusual. However, along with that routine, I had Tim do a supplemental program, which I think made all the difference.

The goal is to stretch and expand the fascia so that, over time, the capillary density and sarcoplasmic material increase. It's nonfunctional hypertrophy, but in bodybuilding they don't deduct points for that.

The stimulus had to be progressive, increasing in volume and frequency over our eight-week window. But the intensity had to be low to avoid overtaxing the central nervous system. Otherwise, his entire body would be adversely affected.

I chose push-ups as the ideal exercise for this high-volume supplement. The reason is simple enough: He could do them at home, either in the morning or at night. (I recommend doing the routine soon after waking or right before bed, since it's easier to remember that way.)

I instructed Tim to touch his chest to the floor on every rep, and to use the same medium-width hand position he'd use for a backstage pump. The goal is to feel a pretty good contraction in the top position of each rep. Going too wide would shorten the range of motion for the pecs, while going too narrow would overemphasize the triceps.

To avoid neural fatigue, no sets go to failure. Try to get 80% of your maximum on each set. So if you start a set feeling as if you can get 20 push-ups, stop at 16.

After four weeks on the program, Tim could tell his chest was quite a bit fuller, and even felt semi-pumped most of the time. While taking updated photos of Tim to send me, even his wife noticed that his chest had improved significantly.

That's what I'd hoped to hear, and that I was about 90% certain would happen. But I was still caught by surprise by another result:

During a time in which he reduced his scale weight from 242 pounds to 231, and reduced his body fat from 7.88% to 6.78%, his strength and endurance increased dramatically. On the decline press, for example, he used 120-pound dumbbells for six reps in Week 1, but was up to six reps with 145s by Week 8.

At the same time, he was able to do 70 push-ups nonstop at the end, after starting with sets of 20.

Is it enough to help Tim improve on last year's second-place finish in the open heavyweight division, and perhaps bring him an overall state championship? We'll know three weeks from now.

So what can you learn from this experiment with an advanced competitive bodybuilder?

First, understand that desperate people do desperate things. Sure, it worked, but that doesn't change the fact that it's an extreme program. Tim, my client, understood the risk of overtraining at this late stage of his contest prep, when we were more focused on getting him lean than in adding new muscle mass.

Second, keep in mind that we weren't looking to build functional strength and size, even though he ended up with dramatic improvements in strength and endurance. But even though it worked for Tim, I wouldn't do a program like this if you're a competitive athlete in any sport in which the guy with the best-looking body doesn't automatically win.

Third, if you want to try this program, keep in mind that it only worked because it's progressive in every sense. We didn't just add volume to the supplemental routine by doing more push-ups. We also increased the weights Tim used in the Monday workout every single week.

Finally, the bottom line is that it did work. Tim's chest got bigger and fuller, and his strength increased while he was reducing body fat. It sounds impossible for all those things to happen simultaneously, but that's what happens sometimes when you push the envelope as far as any sane person would push it.

Pick one lift and do 3-4 sets at 80% of your max at the end of every training session. Here's why.
Powerlifting & Strength, Tips, Training
Christian Thibaudeau December 11 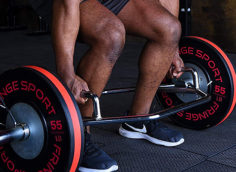 If you can do this exercise for 15 seconds per set, you're pretty awesome. Check it out.
Abs, Tips, Training
Calvin Huynh December 12 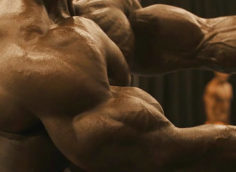