Sooner or later, you're going to tweak your back, and there's nothing you'll ever experience, perhaps shy of limb dismemberment, that'll put a stop to your training as cruelly or effectively. Of course, if you've already had some back problems, you know what we're talking about. Either way we recommend you bone up on the back. It's one complex little beastie.

It's time for Round 3 of my Lower Back Savers. If you missed Parts 1 and 2, check them out here and here, respectively.

This time around, we've got fewer bullet points and plenty of videos.

I've spent a good chunk of the last five years studying unstable surface training (UST). In fact, the results of my master's thesis were published in the Journal of Strength and Conditioning Research in 2007, and I've written an entire e-book about the topic.

I could go in a hundred different directions with this, but for the sake of brevity – and to avoid the guaranteed Internet pissing match that would ensue – I'll simply highlight one obvious perspective and back it up with a bit of research. Classic "core" work on unstable surfaces doesn't really carry over to anything.

Stability balls might increase fiber recruitment on these exercises (and double the spine load, according to Dr. McGill, but that's another story). The bigger issue is that the core stability improvements may not carry over to functional tasks.

A 2004 study from Stanton et al. is a great example of the divide between testing proficiency and performance. Researchers found that six weeks of stability ball training improved core stability in young athletes – as it was measured (in a manner consistent with the training itself).(1)

While their measure of "core stability" improved, it did not effect favorable changes in running economy or running posture, or modify EMG activity of the abdominal or erector spinae muscles. In other words, it didn't carry over.

A comparable result was seen in a 2005 study from Tse et al. After eight weeks of stability ball training in collegiate rowers, while "core stability" (as they tested it) improved, the experimental (core training) group showed no performance improvements over those who did ZERO core training during this time.

So, I guess the question is why bother doing this stuff if there really isn't any evidence to suggest that it directly improves performance? I could take the "it may lead to injury" perspective, but I think that the "why waste your time?" mindset is far superior.

Of course, if you're training with unstable surfaces just for comedic value, carry on.

Take a look at any high-level Olympic lifter or powerlifter, and you'll see some monster thoracic erectors. Why? They subconsciously know to avoid motion in those segments most predisposed to injury, and the extra meat a bit higher up works to buttress the shearing stress that may come from any flexion that might occur higher up on the spine.

Novice lifters, on the other hand, tend to get flexion at those segments – L5-S1, L4-L5, L3-L4, L2-L3 – where you want to avoid flexion at all costs. Show me a lifter with crazy hypertrophy in the lumbar erectors, and I'll show you a guy who probably has a history of back pain. Our body is great at adapting to protect itself – especially as we become better athletes and can impose that much more loading on our bodies.

Here's the issue, though: you've got to take care of your thoracic erectors or else they won't perform up to par. Tissue quality is incredibly important, and since regular massages aren't always feasible, we utilize two "home versions" with our athletes.

First, you've got the more diffuse approach with the foam roller.

Second, you can get more focal with a doubled tennis ball (held together by masking tape) by working with a ball on each side of the thoracic spine.

There's been a pretty solid back-and-forth jabbing here at T Nation over the past few years about whether or not specific "core" work is overrated. Some say that squats and deadlifts are enough, while others insist that you've got to train the core directly. Who's right? As usual, my answer is "it depends."

Would a powerlifter and other breed of athlete – whether it's hockey, soccer, baseball, football, or whatever – have different demands? Yep!

Now, how about an athlete who played baseball when he was younger and then took up powerlifting after a collegiate baseball career? Wouldn't he have a unique set of a) weaknesses and b) functional demands? Of course!

Next, how about a 38-year-old guy who a) chases his two kids around, b) sits at a desk eight hours a day for work and then in the car for another hour to commute, c) lifts heavy stuff three days a week, d) does interval training twice a week, d) does yard work, and e) plays on a beer-league softball team once a week? Think his core might have different functional demands?

Different people, different needs, limited training time and energy. What do you do?

If you're me, you categorize your core exercises in one of the following four disciplines (although there may be some overlap):

Working with predominantly athletes, though, anti-extension and anti-rotation exercises are of paramount importance. As the majority of athletic lower back injuries involve uncontrolled extension or rotation in either an acute or chronic sense.

With anti-extension exercises, we're generally setting up in a position where gravity makes our job tougher. Examples include regular ol' prone bridge variations.

These can be progressed to include all sorts of push-up variations and ab wheel/bar rollout masochism (video at right).

Finally, I love to integrate this work with overhead medicine ball throwing variations, where you resist extension each time you go overhead with the ball, whether you're getting ready to throw, or just catching.

Taking this a step further, you can appreciate that overhead pressing can serve as a great anti-extension exercise.

As you can see, several of these exercises also include a rotary stability component (the overlap to which I alluded earlier). However, it's also important to directly train rotary stability, particularly in rotational sport athletes. A basic side bridge is an excellent start for beginners.

These can be progressed into variations with perturbations, or single-leg side bridge variations.

Next, you can toss in some Pallof press isometric holds and split-stance cable lifts.

And these are all great lead-ins to rotational medicine ball training.

Taken all together, I hope that this classification scheme makes you appreciate that "core training" isn't just about training abs and obliques. More importantly, it's about training motor control: maximizing hip motion and lumbar stability, and then integrating the two in more complex movement schemes.

And, since very few of the readers out there live and die exclusively by squat, bench, deadlift, it becomes increasingly valuable to dabble in all three realms of my classification scheme each week.

One other realm of stability I think is important to cover is single-leg stability or, simply stated, how well you stand on one foot. It's crucial to overall health and performance for a number of reasons.

First, we spend a good chunk of our lives standing on one foot. Lunges, split squats, 1-leg RDLs, step-ups, and other single-leg drills are specific to the real world.

Second, and more specific to back pain, in many (but not all) cases of lower back pain, you can use appreciable loading on single-leg exercises because it's much easier to maintain the spine in a neutral position in split-stance than in the position of bilateral hip flexion that occurs with squatting and deadlifting variations.

Additionally, you can generally drop a vertical line down through the center of gravity from the load on single-leg movements (whether they're loaded with dumbbells or a barbell). As a result, there's less shear stress and a reduced likelihood of going into lumbar flexion under load.

Third, using single-leg exercises with correct technique elicits equal contribution of the hip abductors and adductors; the abductors have to "cancel out" the commonly dominant adductors, or else your knee falls in. Seems easy enough. However, there's more.

Imagine how improved abductor function carries over to the standing position, including gait. If a person's hip falls out (adducts) in weight bearing, the photo below shows what happens to your spine.

This just goes to show you that the role of the hip abductors (glute medius, if that's your cup of tea) is as much dynamic stabilization in weight-bearing – or resisting hip adduction – as it is pure hip abduction. You can also tell that it has direct implications of increasing the likelihood of anterior and lateral knee pain (more valgus).

And, if you don't know what the hell I'm talking about, just recognize that single-leg work is insanely important, whether you're healthy or have back pain. Here are a few articles with some good single-leg flavor: Five Programming Strategies for Quick Results and Single-Leg Supplements

It may be hard to imagine if you haven't ever had back pain before, but those who have tried to do upper body days with back pain can tell you that setting up on a bench can be a pain in the butt.

A lot of lifters with extension-based back pain will have problems with lying back on a flat bench. These individuals can get some quick symptomatic relief by simply elevating the feet on some 25-pound plates or aerobic steps. This little bit of foot-lift leads to a slight increase in hip flexion, which allows the lumbar spine to flatten out a bit, eliminating some of the extension stress.

Another option for these individuals is to simply switch to incline pressing variations. The angle between the seat and back pad on the bench ensures that same position of hip flexion. Or, they can switch to floor pressing with the knees flexed, which keeps the spine a bit flatter on the ground.

It's also worth mentioning that if you're trying to train upper body while dealing with back pain, it's generally a better bet to opt for barbells as opposed to dumbbells with your pressing exercises. When a lower back is hurting, the last thing you need to be doing is bending over to pick up heavy dumbbells from a low rack and maneuvering around the gym with them.

Next up, in the last installment of this series, I'll bring everything to a close with the introduction of some drills you may not have seen before, plus a few technique cues to optimize lower back health and performance. 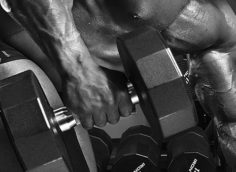 A strong row can change everything. Not only will it build your back, it'll improve your overall performance. Here are the very best variations.
Training
Eirik Sandvik July 9

Once you're past the newbie stage, this becomes more and more important. Here's how to build the connection and your arms!
Tips, Training
Eric Bach December 23

The pullover is a classic chest exercise, and it hits the lats too. Add a band to increase tension throughout the entire movement.
Bodybuilding, Chest, Exercise Coaching, Tips
Michael Warren April 8

Knowing which grip to use with the deadlift, overhead press, jerk, and bench press will make you stronger and injury free.
Powerlifting & Strength, Training
Christian Thibaudeau January 19