A few years ago, I was in Vegas at the Mr. Olympia Expo. The place was filled with exceptional physiques, so much so that I got numb to it all. But at the end of the day, as I was leaving the hall with Ed Coan, he tapped me on the shoulder and pointed at this dude a few yards in front of us.

His was easily the most impressive physique I'd seen all day. His traps and lats were about to bust through his shirt. The long heads of his triceps sat like a couple of Christmas hams between his shoulders and elbows. And he was also rocking a set of gnarly calves. He stood out in a sea of great physiques because he was YOKED.

The "yoke" usually refers to just the neck, traps, and rear delts, but that guy inspired me to redefine the term. From now on, it includes triceps and calves. You need all of them to form a superlative yoke.

It's difficult to build a truly impressive yoke without having spent at least a couple of years slinging some heavy slag-iron for reps. That combo of moving really heavy loads for reps builds the type of density you just can't get with any other kind of training. But you also need to do some concentrated movements for the smaller areas to fill in the gaps of the yoke properly.

Let's go over the exercises first, then I'll lay out a program.

The rear delts usually get neglected, but it's really the posterior delts that add an impressive cap to the shoulders. This is a pretty easy fix and one you can do at home on a daily basis. The band pull-apart will bring your sad little finger-sized rear delts up to snuff quickly.

You don't need a heavy-duty resistance band because you're going to keep the reps high. Rock bottom rep range is 20, done for 4-5 sets daily.

Do some neck flexion and extension, and possibly some lateral flexion. If you have access to a neck machine, then get on that bad boy three to four times a week and work every angle on it for sets of 15-20. The problem is, most gyms don't have these around anymore. Don't worry, it's an easy fix.

I found neck raises with a plate on my forehead (neck flexion) to be absolute money for building a thick neck.

I used to do these every other day for several sets of 20 with a standard 45-pound plate on my head, but worked up to using three plates on my forehead for reps because I was a meathead. No need for you to do that; it really isn't needed.

For the neck extension work, I used a light resistance band because I hate trying to hold the plate on the back of my head.

Stick with sets of 20 or even more here.

And no, I don't like the neck harness stuff. Doing neck extensions with a billion pounds is a bad idea.

This is where the rubber meets the road. Building that shelf up there really grabs attention. Shrugs are a great option to build the upper traps, but the traps actually run from the cervical spine all the way down to the lower thoracic vertebrae. They also insert on the clavicle, acromion, and scapula. Your traps are everywhere!

To really build the traps from top to bottom, you need a variety of movements that hit each area of the traps effectively. Farmers walks always makes the list of anyone who chimes in on yoke building. I don't include them most of the time because most guys use an ego-driven load and fail to set the joints in a proper position to improve the posterior chain/yoke musculature evenly.

This overly-heavy weight causes most guys to do them with a slumped-over position and a lot of internal rotation. Regardless, I'm going to include them here. Just do them right!

To create tension in the musculature of the back, set the scapulas into retraction and depression, i.e. put your shoulders into your back pockets and get the chest out. You should feel this in the mid-traps and rhomboids if you're doing it correctly.

You should also have the lats flexed and maintain a neutral spine. When you throw all of these things together, the farmer's walk does an awesome job of growing the yoke and improves movement patterning for the scap and T-spine.

Remember the following, arranged by level of importance:

See where loading is? It's last. If all of the other things can't be maintained, then you're loading too heavily.

Do them at the end of a back or leg session for 4 trips of 30-40 yards, using an appropriate load (yes, I said it again) where you can maintain the above position. That means not trying to convince the Globo Gym that you're preparing for World's Strongest Ego.

I stole these from Christian Thibaudeau, who stole them from Jim Wendler. You'll need the Rogue Landmine Handle (the angled one), but it's absolutely worth the purchase if you're trying to smash the yoke.

This exercise is sort of a pairing of mini-rows and shrugs. They really smash the middle and upper traps while also bringing in the rhomboids. Shrug and row together, lifting the shoulders up and then pulling the elbows back as well. Hold the top of each rep for at least 3 seconds before lowering.

This was the torso angle that Dorian Yates liked to use for his curl-grip rows, but I've found that rows done in the Smith machine hit the upper back a little better than barbell rows. They really allow you to contract the upper back hard.

The Smith machine automatically keeps the bar in a very efficient path, so there's no energy wasted in trying to keep the bar close to you like with the barbell row. You can focus on the execution more intensely. Do 3 sets of 8-10 reps.

Face pulls do an excellent job of bringing everything up top together. The rear delts get smoked, along with the upper traps, and they're a must-do movement for keeping the shoulders healthy.

The important part of face pull execution is that you get into external rotation. And make sure you're pulling to the face and not the neck. Maybe these would be performed correctly more often if they were called "forehead pulls" or "eyeball pulls," because that's the area you need to be shooting for. Do 4 sets of 12-15 reps.

The long head can be seen from the rear, and it would look weird for a guy to have this massive shelf of shoulders and traps with some sad-ass triceps sitting next to them.

Along with doing your heavy pressing work, throwing in a sweet metabolic-stress giant sets for the triceps is a nice addition to bring those puppies up. Try this one:

If you can get through this giant set four times, hitting sets of 12 reps all the way through, then you're setting yourself up for triceps gains. Do these after your heavier chest or shoulder pressing movements.

If your calves suck, and they most likely do, then reference my article, Every Day is Calf Day.

I'd be remiss if I didn't include some work to make sure the scapulas are operating efficiently.

Combining poor scapula mobility with weak rotator cuff muscles is a recipe for disaster. The scapula serves as the base for the muscles of the rotator cuff. If any of these become short, tight, or weak, then scapular function will be impaired. If the scapula doesn't have proper patterning, it'll lead to dysfunction in the cuff.

If the muscles of the cuff get tight or weak, you'll end up experiencing some pretty severe pain that can radiate anywhere from the front of the shoulder to all the way down the elbow. The scap, cuff, and posture play a major role in building the yoke. Keeping them healthy means pain-free training. And that's kind of important.

Enter two movements. Do them every workout, preferably before you begin the other stuff. Don't load them heavy, though. They're meant to strengthen the muscles needed for awesome stability and to create efficient movement patterning in the scapulas and shoulders.

This is a variation of the traditional Cuban press where you stand with a barbell, do an upright row, and then go into external rotation before pressing overhead.

With the lying dumbbell version, you eliminate the upright row and initiate the movement with what looks a bit more like a face pull. Use very light weights as you're training patterning, the very small muscles of the cuff and, to a lesser degree, the lower traps.

Go into retraction and do a face pull. From there, externally rotate and press. To get the lower traps more engaged, try to raise the dumbbells up as you do the pressing motion. Bring the press back, go into internal rotation, and back to protraction. Do 8-10 reps for 3-4 sets.

This not only works the upper and lower traps, but also trains elevation of the scapula. Proper scapula elevation is required to do an efficient overhead press, but the overhead press doesn't actually train that patterning. And most guys suffer from being too internally rotated while also having excessive scap depression. Again, bad juju. Do 3 to 4 sets of 8-10 reps.

Here's how to fit it all together.

Twice a Week (After your heavy chest or shoulder workout)

These are all solid additions to bringing your flimsy yoke up to par. Push hard on progressive overload for the Smith rows and Rogue shrugs, but progress slowly on the farmers walks.

It's a good idea to make sure you're hitting your vertical pulling (lat pulldowns, chin variations) twice a week as well. Use all of this stuff in conjunction with your deadlifts, squats, and Romanian deadlifts and be consistent.

CrossFit claims that the NSCA is out to get them. Is it a conspiracy or does CrossFit just enjoy bullying people?
CrossFit, Metcon, Opinion, Training
Chris Colucci September 17

Got calves? Probably not. That's because you have to work them every day to get them to grow.
Bodybuilding, Calves, Training
John Meadows November 12 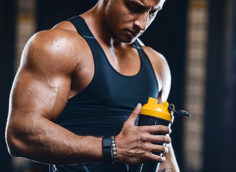 Shake up your at-home workouts, build muscle and strength, and get mobile. Here's how
Training
Brandon Holder April 22