Did you ever notice how most fat folks have big calves? With the exception of cankles, the lower legs are one place where even the largest of the large have what could be considered, at first glance, as muscle.

Okay yeah, it’s mostly Jell-O and pizza drippings under the skin, but there’s usually a decent amount muscle hidden underneath, too. 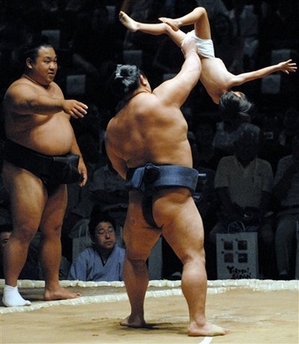 Before we go any further, I have a confession to make. I’m a calf snob. With very few exceptions, I refuse to accept a physique as “ripped,” “swole,” or even impressive if the person isn’t sporting sizeable calves. Maybe it’s unjustified, maybe it’s unprofessional, and maybe it’s harsh, but that’s how it is.

I get a twinge in my brain when people whip out “genetics” as their catch-all reason for having swizzle sticks in their socks. On one hand, your genetic make-up can play a factor in determining your maximum muscle size. But on the other hand, a large percentage of the population isn’t even close to approaching that set point, so it isn’t much of a factor after all. 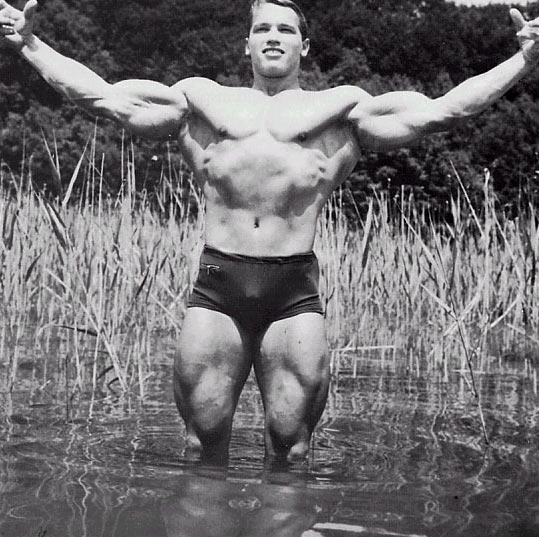 We’ve all heard the stories. When Arnold was younger, he was so embarrassed by his calves that he refused to allow them to be photographed. Then when he came to America, he cut the lower legs off all his pants, so his “weak point” would be on display 24/7, shaming him into getting results. I ain’t entirely buying it. 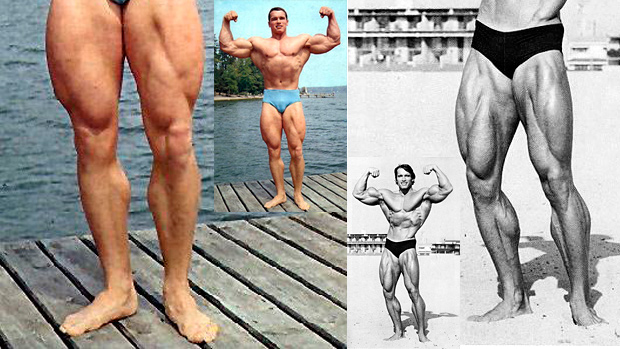 Take a look at these comparative shots. It’s safe to say that there are a number of years between the pictures, certainly enough for Arnold to get in those “1,000 sets” or “100 hours of training” or whatever standard he cited as being essential for improving a weak bodypart.

But really, do you see a drasticdifference in the calves? Or do you see a weightlifting teenager and a weightlifting adult, both of whom spent a lot of time and energy building their bodies? Don’t forget that along the way, he learned how to properly pose and showcase his physique to its most flattering.

Call me crazy, but after all the hype, I was half-expecting to see the Tazmanian Devil in the first shot.

What Makes a Quality Calf?

For a great perspective on calf size goals, we have to turn the page back to a time before Arnold, to the original classic physique… Steve Reeves. Reeves was one of the first bodybuilders to gain popularity in mainstream media at the time, and he set the absolute standard for the more aesthetic-minded bodybuilders like Frank Zane.

According to Reeves, the neck, upper arm (biceps/triceps), and lower leg (calf) should be approximately the same measurement. Along with other ratios for the rest of the body, this creates a well-balanced, proportionate shape from head to toe. 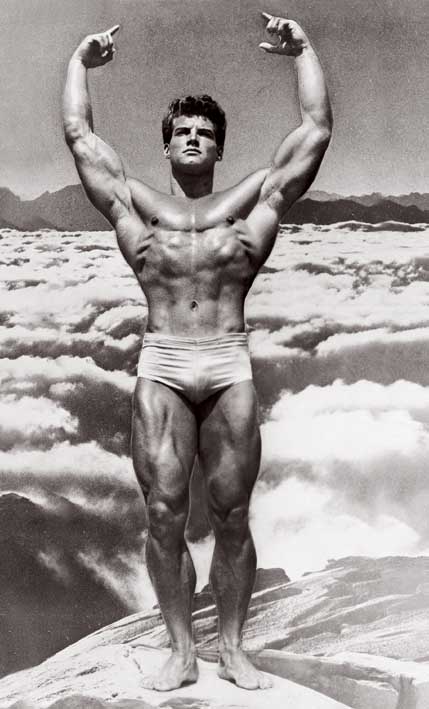 After you do a little number checking and mirror-looking (and fall short of the aforementioned ratios), give this program a shot. It’s a four-week calf specialization that should kickstart some serious gains in your seriously under-appreciated calves. But a few notes before we get into it.

You’ll also notice that the entire routine is “home gym-friendly.” You need a step or block, a power rack, and some dumbbells. That’s it. I train the majority of clients in my home gym and I’ve had to get pretty creative with some of the things we do. So, you’ve got no excuses.

Even if you train in a commercial gym, I recommend sticking to the program as specified. You can always go back to your seated calf machine when you’ve finished the plan.

If possible, go barefoot for the workout. This is perk #216 of having a home gym, and it helps to develop the smaller structures of the ankle and foot without interfering in the calf work.

With B2, pause at the top for a two-count.

For the standing calf raise, get set-up as if you were going to do a back squat with a “normal” (not wide, not overly-narrow) stance. Keep the knees “soft” (I wish there was a better way to describe it); not locked out, but not bent much at all. Come up on the toes smoothly, no jumping. Control the descent without smashing down into the floor.

We’re not performing these from any kind of block or step, so it’s a type of limited range of motion (ROM) that let’s us use maximum weight over a short distance. This exercise is the heavy hitter, literally. We want to use a heavy weight for moderate reps, to near failure each set.

On the “B” supersets, do one set of each exercise for the same leg, rest 20-30 seconds, and then switch legs. So it’s B1-right, B2-right, B3-right, rest, B1-left, B2-left, B3-left, rest, repeat. This is key to the program, and non-negotiable. Unilateral exercises are the real killers.

The dumbbell calf raise uses a step or block to give us some of the extra ROM we traded out from the first exercise. Hold a dumbbell on the same side as the working leg. Use a slow-ish tempo and really get into that stretched position at the bottom, then smoothly come back up. 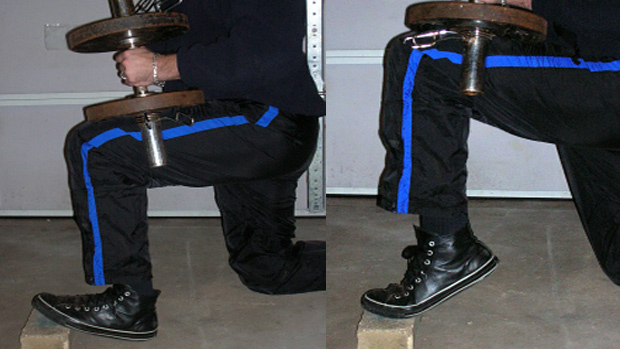 We want some kind of bent-leg raise to attack the soleus more directly, and in the home gym, the lunge-position calf raise is the best way I’ve figured to achieve that. Be sure to sit tall, not slumping on the heel of the support leg, and have the working leg on a step or block. Place a dumbbell on the thigh, not on the top of the kneecap, of the working leg and proceed with reps.

The one-leg toe raise is one of the few good things I learned from an article in Flex magazine. Dorian Yates was talking about the importance of training both sides of the lower leg, the calves and their antagonists the tibialis anterior, and I had a genuine, “A-ha, that does make sense,” moment. 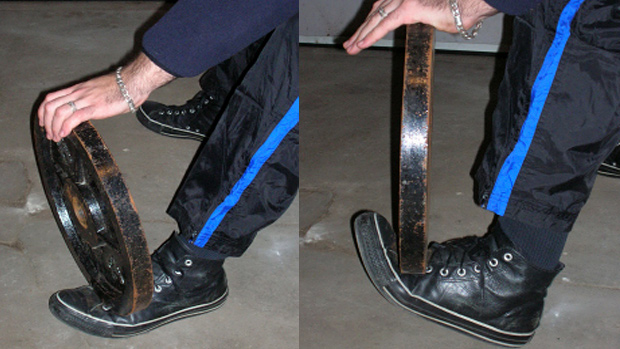 When you’re seated, make sure the working leg is partially extended, not right under you. That allows a greater ROM. Place a dumbbell or plate vertically on the instep and gently keep it in place with one hand throughout the exercise.

What about toe pointing? On any of the calf raise exercises, don’t stress about pointing your toes in or out, one way or the other. It won’t make that much of a difference and it won’t drastically switch the focus to a certain part of your calves.

Take the most natural, comfortable stance for you, and stick with it. But you do want to avoid rolling the ankle in or out with any exercise. That’s asking for injury, and really, I couldn’t handle that on my conscience.

If the Wednesday and Friday workouts seem vague, it’s mostly on purpose. These are maintenance days, and as such, we don’t want to stress too much over them.

I’m trusting you to fill in the template with big, basic exercises. The second and fourth sets of each (the last 10-rep and 5-rep sets) should both be as heavy as you can handle, without hitting failure.

They’re brief workouts, just enough to maintain size and strength without sapping recovery time from our primary target. Also, remember it’s just a four-week program. Afterwards, you can jump right back into whatever it was you were doing.

Odds are your whole body will appreciate the change of pace, and you’ll find all of your lifts going up again. As long as you don’t totally slack off in maintenance mode, you don’t have to worry about any loss of progress.

One big ole’ heavy exercise, three unilateral movements in a superset, four weeks, and you’re done. It was custom-made for the home gym, but definitely give it a shot at your local Gold’s if you’re looking to add some size to your lady-like lower legs. Squat-rack calf raises? I have absolutely no problem starting that fad.