It's the application of functional anatomy to training. You do almost everything in sports in a split stance, or by pushing off one leg from a parallel stance, so it just makes sense to train your body that way.

Since I've already made that argument about single-leg training, there's no need to rehash it here. Instead, I want to present an entirely new question: What if you could get more stress to your legs, build more useable strength, and potentially add more size by working around your back, which is often the weak link in bilateral exercises like squats?

This is what bodybuilders have been doing for decades. By bracing your back in the leg press, you can hit your leg extensors – your quadriceps – with far more load. That's because the load doesn't have to move through your back to get to your legs.

Now, before you think I've done a 180 and come to love the leg press, let me assure you that my opinion hasn't changed. Yes, the machine allows bodybuilders to pile on the plates, but we now know that the back pays a price. It's just a different price than the one lifters pay for using heavy loads in the squat. Instead of compressing the spine, the leg press causes a rounding of the back, which over time might create more damage.

Safety isn't the only reason to avoid the leg press. The exercise has evolved into a kind of a circus act, done with the help of knee wraps, hands on thighs, and abysmal ranges of motion. Did you ever see that video of Pat Robertson, the 74-year-old televangelist, leg-pressing 2,000 pounds? If you took the exercise seriously before, that video surely curbed your enthusiasm.

All that said, when the goal is to build bigger, stronger legs, I still think it's a good idea to target those muscles without having to place heavy loads on the spine. We just need to find a better way to do it.

The rear-foot-elevated split squat, which I'll abbreviate as RFESS, is usually called the Bulgarian split squat (BSS) here on T Nation. In other venues it's referred to as the Bulgarian lunge, despite the fact it didn't originate in Bulgaria and isn't a lunge.

The RFESS has numerous benefits. Beginners, for example, will develop balance and hip flexibility, along with strength, size, and the all-important ability to endure a high level of discomfort while training. But the really dramatic results come when more advanced lifters load up the exercise. You can apply huge weights to your leg muscles with limited spinal compression.

In fact, I think the loading capability of the RFESS is unmatched by any other exercise that primarily targets the leg extensors. And yes, I include the squat. When my trainers and I started using heavy RFESS as the primary lower-body exercise for our athletes, we found they couldn't work both legs without taking a break in between.

A couple of quick technique points:

Recently I performed a little experiment on the hockey players I train, a very compliant group of athletes. I can't call this true "research," as we had no control group, but the results were so startling that I have to think they would stand up under true scientific scrutiny.

For most of our postseason training sessions, we did RFESS instead of traditional front or back squats. My goal initially was to test a hypothesis about back injury and back stress, but the conclusion went way beyond that.

After approximately six weeks of RFESS, we did a simple repetition-max test. Each guy took 50% of his one-rep max on the back squat and did as many RFESS reps as possible with each leg. Since we don't do back squats in our program, we had to estimate each guy's max by adding 15% to his 1RM in the front squat. And then, as I said, we used 50% of that number.

First, if we had spent six weeks working on our back or front squats with equal focus and intensity, there's no way in hell any of these guys could've lifted 5their estimated 1RMs 14 times.

The strongest guy, for example, had a very respectable 1RM of 405 in the front squat. That's the number we used to extrapolate a max back squat of 460 pounds. Is there any drug-free training program on earth that could increase his strength to the point that he could lift either weight – his true 1RM in the front squat or estimated max in the back squat – 14 times? And to make it comparable, he'd need to do two sets of 14 reps, since he did 14 RFESS reps with 230 pounds with each leg.

If he got to the point where he could back squat 460 for 14 reps, it would imply a 1RM of 675 pounds. Nothing's impossible, but this scenario comes pretty close.

That brings us to point number two, which is far more important: The experiment showed that the athletes' legs could handle far more weight than their backs were capable of transmitting. This suggests that the back is the weak link in squatting. Bypass the back, and your legs can handle much heavier weights.

To me, the results of my experiment make intuitive sense. What gets injured most often in squatting? The back. So how do you train your legs with heavier loads, with the goal of increasing strength and size? Bypass the back.

You may wonder why this conclusion isn't completely obvious and uncontroversial.

For starters, old-school gym culture puts the back squat on a pedestal. You can't convince traditionalists that there's a more effective way to train the lower body for strength and size, and they won't experiment to figure it out for themselves.

Second, the RFESS has a specific niche in training programs. It's an exercise you do for fat loss, or for muscular conditioning, usually while holding dumbbells at arm's length. I can't recall any popular book or magazine recommending the exercise with a barbell, using heavy weights for low reps.

Third, I think the exercise is just awkward enough to discourage lifters from pushing themselves to better performance. That's why it's used in fat-loss programs – it feels like a punishment for needing a fat-loss program in the first place. Lifters who've spent years mastering the back squat, followed by months or years with the front squat after coaches like me talked them into switching, don't want to spend a few weeks getting comfortable with the RFESS.

Finally, I think it's difficult for the guy I just mentioned, the guy who's worked like a slave to build bilateral strength in the squat, to work with half his max in a single-leg exercise. I can relate; I wouldn't have considered it back in my powerlifting days. But now that my only goal is to help my athletes get bigger and stronger for their sport, it's a lot easier to be open-minded about better ways to accomplish those goals.

So try looking at it through my eyes: If there's a way to get better results with half the weight by training one leg at a time, shouldn't you at least give it a shot? Especially when you consider the back-sparing effects of using lighter loads?

It's like someone offering you 50% off on your next major purchase. Sounds like a great deal to me. 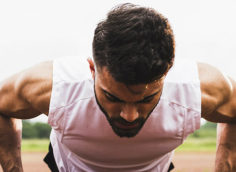 This is not for beginners. But if you're past that stage, this variation will crush your chest, shoulders, and triceps... in a good way.
Chest, Push-Up, Tips, Training
Joel Seedman, PhD October 11

Build your legs and your work ethic with this grueling combo. Here's how.
Tips, Training
Ben Bruno January 18

Deadlift stuck? Then you're probably missing one important thing. Here it is.
Deadlift, Powerlifting & Strength, Tips, Training
Tony Gentilcore May 12

Smart lifters never stop training, even when injured. Here's how to recover as quickly as possible and come back even stronger.
It Hurts Fix It, Mobility, Soft-Tissue Techniques, Training
Jonathan Pope October 2