I have a secret. I did CrossFit almost exclusively last summer. I’ve competed in Olympic lifting, powerlifting, and I’ve been a competitive bodybuilder… and now I can say I’ve been a CrossFitter too. I went to CrossFit Levis three times a week and then trained on my own to work on strength and my Olympic lifts. I actually kept a kind of CrossFit journal back then. So, one year later, here it is: my CrossFit diary, along with some current-day observations.

Why I Decided to Try CrossFit

That’s why I decided to give it a try.

May, 2013 – Stuff I Learned From My First Month of CrossFit 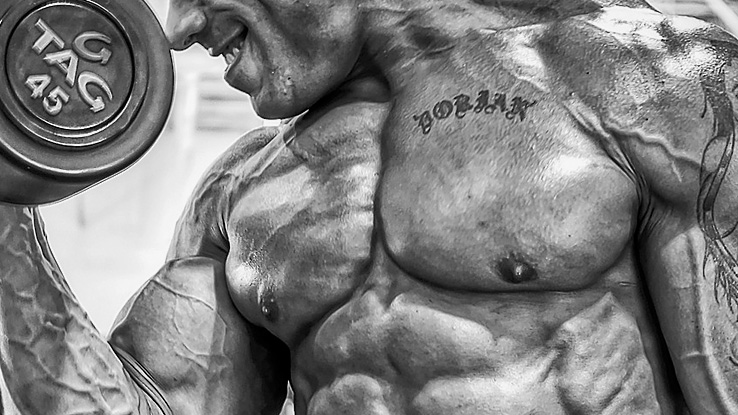 By now you might realize that I have an “all-out” attitude. Moderation isn’t in my nature. So after less than two months of this type of training my wife and I decided to sign up for a 24-hour CrossFit marathon organized to raise funds for a city that got hit by a huge train explosion that devastated half the downtown area. The event lasted 24 straight hours, one workout being performed every hour. We were divided into teams of four, so we all had to do six workouts, one every four hours or so. My wife and I stayed at the gym the whole time, except for two brief periods when we went back home to feed the dogs. It would be a lie to tell you that we slept, as sleeping was a physical impossibility.

When I got to the gym, I quickly noticed that a ton of people knew me; some knew me because I had coached them in Olympic lifting and many others knew me by reputation. All were surprised to see me there as they didn’t know anything about my “shift in training.”

So when the first workout came up I felt an amazing amount of pressure. In fact, my heart rate was close to a fatal level before the workout even started. Plus, the workouts were picked at random so we couldn’t really assign specific workouts to the team members because we didn’t know the order of the workouts in advance. That made things even worse.

It turns out that I had to do the workout named “Fran,” which is 21 thrusters (95 pounds), 21 pull-ups, 15 thrusters, 15 pull-ups, 9 thrusters, 9 pull-ups for time. It looks quite innocent, but the thing is that you basically can’t breathe during that workout. The thrusters are the absolute worst exercise when it comes to breathing, and then you have to do pull-ups where deep breathing is almost impossible because you can’t elevate your chest.

I made the mistake of really blasting through the first 21 thrusters. While I was the first one done, I gassed out bad when I walked toward the pull-up rack. This was due to lack of breathing plus the elevated heart rate at the start. I was able to pull through but I promised never to do that workout again.

My second workout was even worse:

It actually went fairly well, except for falling down three times while doing the handstand push-ups (it’s not something I’d practiced), but I was really disappointed when I saw that the next workout (the one a teammate got to do instead of me) was testing your deadlift 1RM. I would have cleaned up on that one!

I did fairly well in my third workout, which consisted of five rounds of the following:

Again, the next workout consisted of 5-4-3-2-1 in the power clean and kettlebell snatch. I would’ve done very well at that one, too, but my wife got to do it and I’m proud to say that her cleans looked very solid. Finally, in the next round, I drew one that was designed for me: “Isabelle,” which is 30 snatches with 135 pounds. All eyes were on me and I was expecting a very solid performance.

Sadly, when luck is not on your side, it’s really not on your side. After the first 10 reps, where it felt like I was snatching an empty bar, my left quad started to cramp bad. In fact I was unable to put any weight on my leg at all without experiencing severe cramps. So I stopped, took two servings of Plazma and 3000ml of water, waited 10 minutes and did it again. Sadly, most people were finished and getting some rest by then.

The rest of the experience is a haze. I’m someone who normally wakes up at 4:30 AM and goes to sleep at 8 PM. That day I still woke up at 4:30 AM but I finished my fourth workout at roughly 3 AM. I do not respond well to sleep deprivation. I finished with a workout that was tailored to me, but at that point I was fighting to stay alive and awake so I can’t say that I killed it.

The main thing I learned during these four weeks was the value of loaded carries. I was reminded about them when I had to do a workout at CrossFit Levis that included 5 rounds of a 400m farmer’s walk while carrying 24kg kettlebells. Then, two days later, I did the farmer’s walk at the CrossFit marathon. My forearms and traps might have doubled in size. Okay, I’m exaggerating, but the farmer’s walk did have a profound impact. And I also found that they can teach you to breathe properly during intense effort. When doing conditioning/strength-capacity type work, breathing is something that’s highly underrated, yet is of supreme importance for optimal performance. I’ll make sure to include more farmer’s walks in my training for their effects on body composition, muscle mass, and breathing skills.

It Was Going So Well..

Back to the present… My CrossFit experience ended soon after my third month passed. That’s when my health issues started. I don’t want to cover them all over again since they were detailed in the Micro-PA forum, but suffice it to say they stopped my momentum.

I spent some time rebuilding some of the muscle mass I lost when I was hospitalized. To do that, I went back to regular heavy lifting. Now that my base is coming back, I’m focusing on the Olympic lifts again. I’m doing plenty of strength work, too. I have the two Olympic lifts every day and I do pulling strength-movements on day 1, pushing on day 2, and legs (squats) on day 3. I then take a day off and repeat.

I’m using the tried and true 5 x 5 for my strength lifts. My goal is to get 5 sets of 5 reps with the same weight, and when I can do that I increase the load. I never decrease the weight. On some sets I might only make it to 3 or 4 reps, but that’s fine and it means I won’t increase the weight for the next workout.

Will I do CrossFit again? Probably. Not to the same extent as I did last summer but when my strength levels are back up where I want them to be, I’ll start hitting CrossFit Levis with my wife once or twice a week. I’ll have to be ready to have my ass kicked, though, since, unlike me, she didn’t stop!