“Ellington, just wanted to say that I hate you . . . in a positive way. I didn’t think I’d ever be at a point where typing hurts, but right now it does, immensely (from your #3 arm workout).

“I’m not 100% sure yet, but the chance is high that because of me (and my results) you won’t have to call yourself Arnold.”

Believe me, Robert, I feel your pain . . . and I appreciate your confidence.

It’s been three weeks since I issued The BIGGER-ARMS Challenge to T-Nation members. More than 100 of you signed up to do 4 workouts – which consisted of unique biceps and triceps cycles – from May 8th to May 21st.

I promised that the cycles, properly performed, would add 3/8s of an inch to the average guy’s upper arms. If not, I vowed to call myself Arnold instead of Ellington.

With Robert P, and others like him, doing the challenge, I feel pretty secure about the results. On the other hand, veteran T-Nation members, Monster Wong and mertdawg, in obvious defiance to my Old-School HIT challenge, started their own bigger-arms plan, which included daily sessions of multiple-sets of biceps and triceps exercises.

So, members of T-Nation, what about it? Is it possible – was it possible–to add 3/8ths of an inch on the biceps from 4 brief workouts spread over 2 weeks?

Well the two weeks are up, and now I want to hear about everyone’s results. Anyone who followed the previous thread is also encouraged to provide feedback . . . including Monster Wong and mertdawg.

Those of you who officially post your before-and-after measurements and before-and-after digital photographs are entitled to an exclusive, T-Nation baseball cap. Remember, it’s not imperative that you include your face in the shots, or even your entire body. The important thing is to see those pythons!

(Sorry, I had a momentary “Hulk Hogan” flashback.)

To jump-start the reporting, I want to begin with my Jackson, Tennessee, recruit: Gregg Downing.

From May 1st to May 15th, 2006, I trained Gregg Downing four times applying the specific routines in The BIGGER-ARMS Challenge. Gregg worked intensely during each of the four sessions.

I took a few more circumference measurements on Gregg than just the required right and left upper arms, and I’m glad I did. The results are as follows:

When combined with his 3.5 pounds of weight gain, Gregg had a muscle mass increaseof 5.46 pounds.

If you look closely at the before-and-after circumference measurements, you’ll see that each of Gregg’s forearms and upper arms increased by 1/4 inch. With the special attention given to biceps and triceps, I expected at least a 3/8ths of an inch improvement on upper arms.

But if you look again at the other before-and-after comparisons, you’ll note that Gregg added 1-1/2 inches to his chest and back, and almost 1 inch to each thigh. That was sort of a surprise to me – although, frankly, I should have expected it.

It’s well known that chins and dips work the back and chest extremely hard and Gregg’s results bear this out. And his strict, intense leg presses had a positive effect on his hips and thighs.

As a follow-up experiment, I asked Gregg back to my home gym on May 16th for a fifth workout. My goal was to see if a slightly different series of biceps and triceps exercises could bump his upper arms an additional 1/8 inch. In my past experience with similar arm cycles I’ve found that it’s fairly easy to burn out on the extremely slow chins and dips.

Prior to his fourth workout, Gregg seemed to be dreading them.

So, I wanted to try a different routine – without the slow, one-repetition chin and dip – and with a few old-school twists.

Here’s the exact series, and a brief discussion of the exercises, that I put him through:

You’ll notice I had Gregg exercise his triceps before his biceps, which was different from workouts 1-4. Plus, my thinking here was I wanted to subject him to heavy negatives (60 pounds was 10 pounds more than he had handled before) and then have him do higher reps than he had performed previously with only his body weight.

This combination should produce a greater pump . . . and it did.

Neither one of these leg exercises was carried to momentary muscular failure. My idea was to hold back a little on his lower body and save the majority of his recovery ability for his arms.

6. Biceps curl with thick-handle barbell: 60/12 very strict, plus 6 more with a looser style

Again, like exercises 1 and 2, I wanted to make sure Gregg did higher reps on both his triceps and biceps . . . so he could engorge his upper arms with blood and fluids. And, it certainly accomplished a temporary size increase.

Could that be what Gregg Downing needed to get that extra 1/8 inch on his upper arms?

THREE-EIGHTHS OF AN INCH

YES! That fifth workout pushed the necessary buttons. Gregg’s right contracted arm was 15-13/16 inches and his left arm was 15-1/2 inches – which meant he had successfully added 3/8 of an inch to each upper arm. It had just taken him one additional workout to achieve our goal. 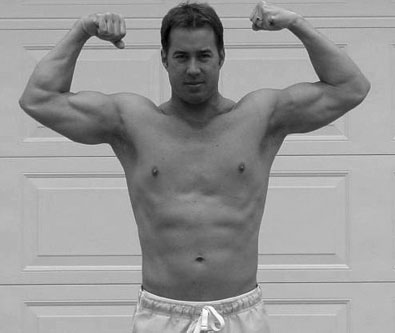 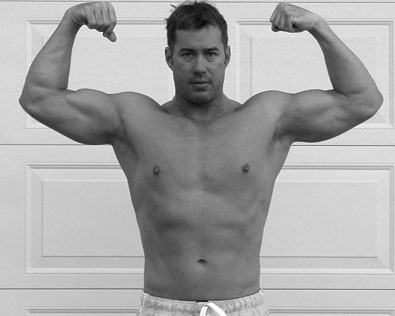 These BEFORE and AFTER double-biceps shots of Gregg Downing were taken 17 days apart. They were snapped early in the morning prior to the workout and the conditions were standardized to a reasonable degree. Look closely and you’ll see increases in both arms, as well as more thickness in his pecs and lats. Gregg improved his lean-body mass by 5.46 pounds.

Gregg Downing: “My Arms Are Bigger”

Sure, I’d heard of HIT. I even tinkered with it ten years ago. But I’ll tell you this: I didn’t do it anywhere close to what I’ve experienced in the last several weeks. The strictness, the precision, the smoothness, and the focus that Ellington demanded during each repetition made a measurable difference.

During the first workout, I realized most of my previous training had involved about 75 percent of each exercise’s range of movement. I’d learned how to short range my favorite lifts. There was NO short-ranging with Ellington. The weight was reduced and I was forced to emphasize that first and last 10 degrees of movement – and, man, what a pump that produced!

Those one-rep chins and dips really kicked my ass. Just when I thought I had a handle on them, Ellington added negative-only chins and dips and made me think I was a newbie in high school.

But those brief workouts (I finished each one in an average time of 20 minutes) achieved what 12 years couldn’t: I finally added some significant size on my biceps and triceps. I broke through my long-term plateau. My arms are bigger.

As a bonus, my chest and lats have grown even more than my arms. In fact, my shirts – which I get tailor-made at a specialty store – are now borderline tight through the upper torso.

I want to thank Ellington Darden for introducing me to a system of training that has made my quest for larger muscles ten times more efficient than what I had been doing previously. At 36 years of age – as a husband, father, and businessman – my free time is increasingly valuable. Having several more hours per week, as I do now, is a true blessing.

Perhaps you’re in a similar situation as me, or maybe you soon will be. If you haven’t tried Ellington’s new take on old-school bodybuilding, you should. Don’t waste months or years of your precious time, like I did, searching for a solution… when that solution has been around – but misunderstood and not applied correctly. Get involved now.