To see your abs, diet plays a big role. Yeah, no crap. Everyone knows that. But a lot of people forget one thing: to really make the abs pop you have to build them. Hypertrophied abs will look great even if your body fat creeps up. So what’s the best way to build them? We asked our experts.

Maximizing muscle growth requires lower to moderate reps in the 8-15 range. It’s also important to hold the contraction for a one-second count on each rep, regardless of the exercise to recruit the muscle.

Whenever possible, add resistance with weight. Most people increase the load on exercises for major muscle groups but they don’t on ab exercises. That’s a mistake. Think ankle weights for leg raises, or a 45-pound plate for crunches.

High frequency training builds abs the best. For me this means hitting them 4-6 times per week. Four sets per session is usually adequate. If pressed for time, and you can’t feasibly hit a 4-6 day a week frequency, then do a two-exercise superset where the first exercise is predominantly lower-ab focused followed by an upper ab exercise. An example would be hanging leg raises immediately followed by rope crunches.

Train abs according to their muscle type.

The abs are composed of primarily type-II or fast-twitch (FT) muscle fibers. That means they’re best suited for heavier weight and lower-rep sets rather than excessive numbers with bodyweight alone. Here’s how to hit them:

This is a great exercise to really tap into those FT fibers under load. During this movement, the lower body is secured as the upper body moves.

For this one, your upper body is secured while your lower body moves. 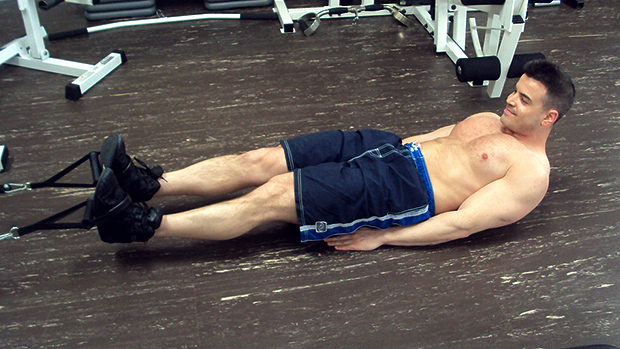 In most gyms you’ll see a medicine ball or dumbbell held between the feet for resistance during knee-ins, but since the weight is acting downward, this tends to over-activate the hip flexor muscles to keep the weight up off the ground. A much better option is to use horizontal loading using a cable, which provides resistance in the direction of the movement.

Learn to create tension in the abs without flexion.

You’ll have showy abs if you’re lean of course, but training them in a functional way will reduce injury potential, improve posture, and improve the ability to hold proper (neutral) spine alignment during training, especially on the big lifts like squats and pulls. We’re talking both the transverse and rectus abs here.

As lifters we should be more concerned about abs as a functional muscle group. (I just used the word “functional.” Someone shoot me.) This provides stability for the trunk, spine, and pelvis rather than just training it like a showy muscle.

The rectus abdominis is the only dynamic muscle group that helps in establishing stability through the trunk. Everything else works in concert to establish stability for the spine. That puts you in a bit of a pickle if you understand that the rectus abdominis also functions to flex the spine as well. The last thing we want on a big squat or deadlift, or even during leg pressing, is for the spine to round, putting your disks in a very vulnerable position.

This means creating tension through the rectus abdominis without causing spinal flexion. This almost seems contradictory, but it can be done. It’s mostly achieved through proper breathing (through the diaphragm), pushing the transverse abs out, and forcing the obliques down. Do this during squats and deadlifts, hold the position, and your trunk will become rigid and strong.

But you can get the abs involved in a plethora of movements outside of squats and deadlifts. One of my favorite ways to work the ol’ rectus abs is tricep pushdowns. Anyone who’s ever done them this way ends up very sore from it. I actually learned this from an article where Franco Columbu talked about how he hated training his abs and simply figured out a way to train them with pushdowns.

They’re basically leaning triceps pushdowns. To do these, step away from the cable a few feet rather than being close to it. From there, push out and down into your abs.

If you do this correctly, you’ll create tremendous tension through the abs and force them to stabilize really hard. Plus you’re working pipes while doing it, and big pipes get about as much attention as rock-hard abs. – Paul Carter

The best way to build a big, strong core is by carrying heavy loads multiple days a week. Use different implements and don’t be scared to go heavy.

Picking up heavy-ass weights and walking with them is primal. And from a strength and hypertrophy standpoint, it enhances a midsection like no other. Set a standard, carry some weights, and get stronger over time just as you would with your big lifts. What standard? I like two times bodyweight for 30 seconds.

If you can do that, it’ll be just a matter of time until your obliques start shredding out the sides of your body and your big lifts start jumping up. When it comes to the core, function goes hand and hand with aesthetics. – Dr John Rusin

Train them in 4-week blocks.

If you’re already training them regularly, then stop what you’re doing and give your abs a break for the next four weeks. Then attack your abs with an all-out assault for the following four weeks.

For any muscle to recover and grow it must undergo supercompensation. Supercompensation is the body’s full adaptation to an exercise program, which doesn’t take place if you’re finishing every workout with sets of crunches to failure. By taking a short break, you’ll allow your body to recover and build muscle from the work you’ve already put in.

After the break, you’ll go through another intense training block where you train one or two flexion-based movements during each workout to trigger more growth. This works for a few reasons:

When you combine alternating four-week blocks of ab training, high tension compound movements, and a steady dose of flexion-based isolation work you have the perfect recipe for rapid ab growth. – Eric Bach

When it comes to ab hypertrophy, start adding weight or resistance to your exercises. Increase the difficulty of the lifts the same way you would with any other body part to give it new stimulation. You wouldn’t expect your legs to grow if all you did was bodyweight squats, so you can’t expect your abs to grow from doing a few crunches.

You’ll progress by changing up your routine and making it more challenging. Try using bands because you have more options for the level of resistance and it’s easier to hit different angles. My two favorite exercises are:

The bands can be around your feet or knees.

Again, the bands can be around your feet or knees.

If you’re doing your right leg, bring your leg up towards the left side of your body to target the obliques (and the opposite for the left side). – Bronwen Blunt

Cosmetically, those wishing to build killer abs focus on the rectus muscles. This long flat structure is actually two muscles side by side, originating at the sternum and the bottom ribs, and inserting into the pubic bone. 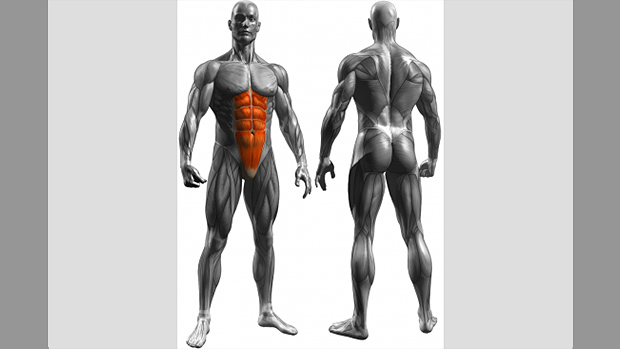 A thick fascia called the rectus sheath covers the muscle and is held down to the rest of the supporting abdominal structures by tendineous inscriptions. The space between these inscriptions delineate the famed “six pack.” The function of this muscle is to move the hip toward the chest. The joint in this case is actually multiple joints – the spine.

There’s another muscle group, underneath and below the rectus, which raises the legs toward the chest – the hip flexors. This is not the muscle you want to work if you’re intent on working your abs! Unfortunately, I see many people who think they’re working their abs when they’re predominately working their hip flexors.

Rope crunches are perhaps the most popular ab exercise known to man. If you’re kneeling down and bending at the waist, with your back flat, you’re not working your abs at all. That’s all hip flexor. 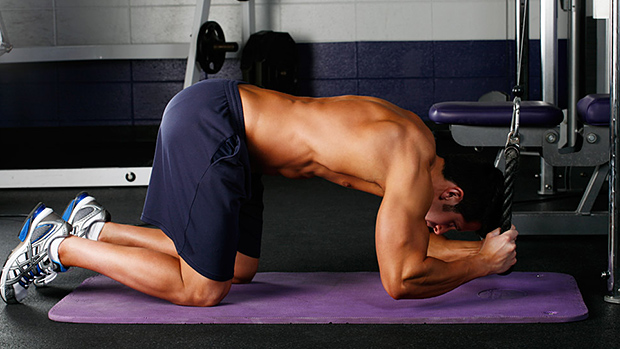 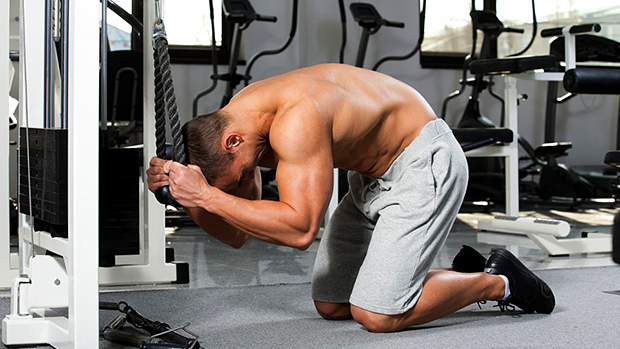 To involve your abs, you have to do the exact opposite – lock your hips and bend your back. The start position for a rope crunch is with the spine arched as far back as possible (full extension). It’s performed correctly by pulling the elbows toward the knees, with the spine going from full extension to full flexion, while the waist (hips) stay totally locked and stationary. This focuses all the work on the abs.

The same goes for sit-ups, hanging leg raises, and any “crunching” exercise that takes the spine from full extension to full flexion. If you do these right, don’t be surprised if you can’t use as much weight or do as many reps as you were when you were training your hip flexors. – John Romano

Do the ab rollout.

Before competing, I knew my abs were lagging. But there was one exercise above all that had the most dramatic effect: the ab rollout. And doing them was what helped me win.

During ab rollouts you’re working the upper and lower rectus abdominis and the external and internal obliques. It’s challenging as is, but even more so if you squeeze the glutes, putting you into a slight posterior pelvic tilt and preventing the abdominal wall from being stretched during the exercise. It’s considered an anti-extension core stability exercise, which means it strengthens the spine’s ability to resist hyperextension.

Rollouts also train your abs the way the muscles are designed to function. The abs aren’t meant to flex the torso or bring the shoulders to the hips like during a crunch or sit-up. What they actually do is prevent you from going into extension.

Rollouts are better than traditional flexion exercises and will help you build stronger and more defined abs. You can even tweak it by doing hip abducted ab rollouts. Check it out:

This is a small adjustment to a common and very effective core exercise. Either use an ab wheel or bar. Simply move one leg to the side. By doing so you remove half of your base, and that puts a lot of tension on the side that stays in the middle. This creates a ton of tension across the entire torso. – Michael Warren

Hit a lot of angles and increase time under tension.

If you’re really serious about building bigger abs, take a high-frequency approach: 4-6 days per week. The day after the giant set do similar exercises but each as a stand-alone exercise – not in a complex – and do each one with a change in angles.

Try weighted hanging knee raises to failure, decline weighted crunches for 10-12 reps, and bird-dog weighted planks (one arm and the opposite leg are raised with a weight on your back). – Amit Sapir

Progressive overload, though you might look better NOT training them.

Around fifteen years ago I went on an ab-training tear. I did dumbbell crunches, straight leg sit-ups, and dumbbell side bends four days per week using progressive overload.

Around this time, my abs actually got too muscular for my liking. They looked like the shell of a ninja turtle. Unfortunately, there’s no picture of this because it was before the days of insta-face-twit.

Coincidentally, it was around this same time when I read a Branch Warren interview right after he won the Ironman and sported his best abs ever. They asked him what he did for his abs and he said, “I quit training them. They were too blocky and now I look better.”

I followed suit and quit training my abs with heavy weight. I was worried that avoiding heavy ab/oblique training would negatively impact my squat and deadlift strength, but it didn’t.

Core stability is direction-specific and the erectors are the dominant muscle involved in stabilizing the spine during axial loaded hip and knee extension exercises. Nevertheless, if you want ab muscle, do the above 6-set program four times per week and watch your midsection grow. – Bret Contreras