Getting bigger shoulders is a common goal. However, if your programming doesn’t match your goals, you’re setting yourself up for failure no matter how hard you’re working. Here are 8 tips for turning your dreams of watermelon-sized deltoids into reality.

For most people, the bench press reigns supreme in the hierarchy of upper body exercises, or all exercises for that matter. Consequently, they’ll bench early in the week when they’re fresh – hence the reason Mondays are deemed “National Bench Day” – and often bench multiple times per week.

Furthermore, their upper body “assistance work” is geared towards improving the bench press, namely the pecs and triceps. Consequently, workout sessions consists of dumbbell presses, board presses, close-grip bench, and little else. Additionally, those following body-part splits typically include chest day before shoulder day in their weekly training split.

When the goal is bigger shoulders, shift your focus away from the bench press and onto the overhead press. Schedule the overhead press first in your workouts and do it early in the week when you’re fresh. Rather than chasing a bigger bench, chase a stronger overhead press. Not only will your shoulder development improve, but you’ll likely see an increase in your bench too, especially if you’ve been neglecting overhead pressing.

The barbell overhead press is a great exercise and would probably be my “go to” for building bigger shoulders, but it can cause shoulder issues if done for too long and/or too often with heavy weights. As with most heavy barbell exercises, if some is good, more isn’t necessarily (and usually isn’t) better. A little moderation can go a long way.

It’s wise to take a break from the barbell overhead press and switch to neutral grip dumbbell overhead presses for slightly higher reps to give the joints a breather while still training the overhead pattern and giving the shoulders a good training effect. 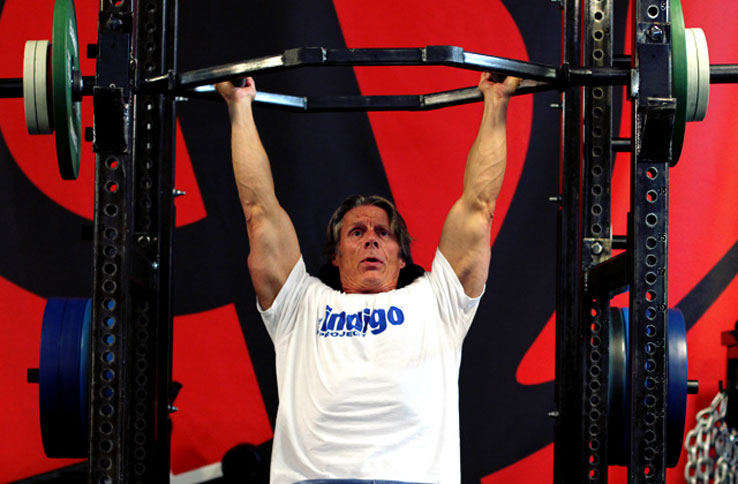 The exception here would be if you have a bar that allows for a neutral grip such as the Swiss bar, football bar, trap bar, or Dead-Squat™ Bar.

3 – Limit overhead pressing to once a week.

High frequency overhead pressing doesn’t tend to work well for most and usually ends with shoulder pain. You may be able to get away with overhead pressing multiple times a week for a while, but at some point it’ll catch up to you. That doesn’t make it a bad exercise, it just means that you need to exercise some prudence in your programming and not overdo it. A good rule is to limit overhead pressing to once a week.

4 – If overhead pressing bothers your shoulders, don’t do it.

This point should be common sense, but unfortunately, common sense isn’t all that common. As good of an exercise as the overhead press might be, it’s not for everyone. If you can’t overhead press for whatever reason, stick to landmine presses and get really strong at them. You’ll be just fine.

Increasing the frequency of shoulder training is a great way to build up your shoulders, but the key to higher frequency training is to employ lighter “joint-friendly” work for the majority of your training volume to avoid overuse injuries and/or joint problems. Lateral raises fit the bill perfectly here and can be done 2-4 times a week, starting with two days and progressing to 4 over time as tolerated.

I typically say that adding weight is the best form of progressive overload, but not for lateral raises. Sure you’ll be able to bump the weights up a little bit when you first start doing them, but most people plateau quickly and subsequent weight increases just mean using worse form. It then becomes hard to measure progress. Did you get stronger or did you just cheat more?

Instead, keep the weight for lateral raises lighter and focus on maintaining good form with your arms reasonably straight and body English kept to a minimum. If you use some momentum on the last couple reps of a set, that’s one thing, but if you’re heave-ho’ing from the get-go, the weight is too heavy.

Instead of chasing weight increases, try to increase the reps or the volume, adding in a few sets here and there or doing them an extra day per week. I like using the countdown method where you startby choosing a set number of reps, usually somewhere between 4 and 6.

However many reps you started with, you’ll immediately follow that up with an isometric hold, held for an equivalent number of seconds.

Then you begin the countdown, all the way down to 1 rep. Let’s say you chose to start with 5 reps. The set would then look like this:

Were I writing a “Best Exercises You’ve Never Tried” article, landmine lateral raises would be right at the top of the list. It’s quickly become one of my absolute favorite shoulder exercises and I’ve received tons of feedback from people in the last year who have tried them and now love them too. Like dumbbell lateral raises, they’re also very shoulder friendly and can be done with a higher frequency.

The one complaint I’ve heard from some folks is that they’re simply too difficult, even with an empty barbell. If you find that’s the case for you, “choke up” on the barbell by gripping it farther down the sleeve, or even try holding the bar on the skinny part to shorten the lever arm and make it easier. They’ll still work great.

8 – Do “upper back” work every training session.

Many coaches advocate including some form of lower-load work for the upper back in every training session to build up the upper back, improve posture, and help ward off shoulder injuries that can come from too much upper body pressing with not enough pulling to balance it out.

I agree with all of those reasons. I’d add, however, that this high frequency upper back training can also be a great way to build up the shoulders by giving more attention to the oft-neglected rear delts, since a lot of “upper back” exercises could just as easily be classified as “rear delt” exercises.

Here are two great “upper back” exercises that will also smoke your rear delts:

Here’s a sample 4-Day program based on the principles laid out in the article: