Title of Research Study: The effects of eccentric velocity on activation of elbow flexors: evaluation by magnetic resonance imaging

Affiliation(s): Department of Biokinesiology and Physical Therapy; and School of Medicine, Department of Radiology, University of Southern California

Using magnetic resonance imaging (MRI), muscle activation of the elbow flexors during arm curls was found to vary depending on the speed of movement. During "fast" eccentric contractions (2 seconds lowering of the weight), the biceps brachii appears to be preferentially recruited.

In contrast, during "slow" eccentric contractions (10 seconds lowering of the weight), the brachialis seems to undergo the most activation. Finally, although not "statistically significant," the fast protocol resulted in 30% greater total muscle activation (when both muscles were combined).

The purpose of this study was to compare muscle activity of the biceps brachii and brachialis during "fast" and "slow" eccentric contractions. Twelve healthy men who were currently weight training completed the study. Each subject completed one protocol (slow or fast) with one arm, and the opposite protocol with the other arm. In this way, each subject served as their own control – a very strong design for uncovering experimental effects.

MRI was used to precisely quantify muscle activation by measuring a variable called the T2 relaxation time. In essence, T2 represents a muscle's signal intensity and is calculated from its change in water content. Specifically, during a muscle contraction the fluid exchange between the vasculature (surrounding blood vessels) and the extracellular space decreases. In contrast, immediately after a muscle contraction the opposite happens (i.e., fluid exchange increases).

T2 is correlated with electromyographic activity (EMG – the gold standard for determining muscle activity) during concentric and eccentric actions, but can do two things that EMG can't: 1) determine the individual activity of adjacent muscles (EMG signals between adjacent muscles are sometimes contaminated with electrical "crosstalk") and 2) compare pre- and post-exercise muscle involvement (whereas EMG can only determine muscle activity during exercise).

In other words, because it's a more sensitive tool for detecting change, MRI rules. Here's a graphical representation of the results:

As you can see, when the eccentric phase of the arm curl was performed rapidly the activation of the biceps brachii (the blue bar) increased more than the brachialis (the red bar). However, during slow sets of eccentric arm curls the activity of the brachialis increased more than the biceps. Why the difference? Anatomy my friends. The biceps brachii spans two-joints and has a fusiform structure (tapering toward each end). This renders it capable of rapid, forceful shortening. In contrast, the brachialis is a single joint muscle with a multipennate structure (a muscle whose fibers approach the tendon from several directions). This slows down its contraction speed and makes it ideal for joint stabilization.

Although probably less of a factor, the authors also speculated that the biceps brachii might contain a higher proportion of fast-twitch muscle fibers in comparison to the brachialis... hmm, maybe. But since fiber-type data on the brachialis is essentially non-existent, I'll stick with the anatomical mechanism for now.

As far as practical applications, this study has implications for both body builders and those involved in rehabilitation. For maximal increases in size, both fast and slow training methods should be employed. But considering that fast-twitch fibers are much larger than slow-twitch fibers, I recommend that at least 75% of training be performed using an eccentric tempo of 2-4 seconds. During rehab however, training muscles to help stabilize joints would require emphasizing slow eccentric loading (5-10 seconds).

All in all, a pretty decent study. 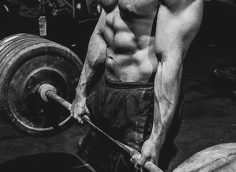 Can you really build stronger, wider lats in 14 days? Yes, but it’s really going to hurt. Here’s how to do it.
Back, Training
Ellington Darden, PhD January 17

The subtle shift in hand and arm position on the lowering phase will crank up the challenge and the strength and muscle gains.
Exercise Coaching, Pull-Up, Tips
Ben Bruno August 29
Sometimes it's really interesting to dig into the microscopic details of training and nutrition, to dissect the body of academia and examine every little study. That's how we learn things. That's how we refine the science that later helps us get bigger and stronger and leaner.
Training
Chris Shugart December 2