A Box Squat, But Not the Westside Version

Squatting has long been called "the king of exercises," and for good reason. No other single exercise leads to so many positive adaptations simultaneously: total-body strength, muscle development, power, core stability, athletic functionality, and anaerobic endurance, just to name a few.

Despite these fantastic attributes, there's a specific method of squatting that, for most lifters, is actually superior to the classic "deep knee bend," as the old-timers used to call it. It's called the box squat. This underappreciated squat variant has several unique advantages.

First, an important distinction: What I'm about to describe isn't the box squat popularized by Louie Simmons of Westside Barbell fame. The Westside box squat has you sitting down with your entire bodyweight on the box and actually disengaging the hip extensors briefly before ascending back to a standing position. That particular variant seems effective for IPF geared powerlifters, but is much less preferable for everyone else.

Instead, what I'm advocating here is sitting down to a box – touching it with your glutes but not placing any of your bodyweight onto it.

First, let's cover the rationale behind the "touch and go" box squat. After that, I'll provide some suggestions about how to get the most from this great exercise.

1 – Teaches You to Sit BACK, Not Down

This is most relevant for beginners, but it's also very useful for anyone who never felt quite as comfortable as they'd like with squatting.

It turns out that when you tell most non-lifters to "squat," they simply bend sharply from the knees, as if the squat were a single-joint movement. Of course, if you asked that same person to sit down, he'd immediately do a near-perfect squat. When you sit, you initiate the movement by sitting back with your hips. This creates tension on the hamstrings, which has a protective effect on the knees. Now of course, your knees will indeed bend. If they don't, it's not a squat.

The point is, the knees bend slightly after the hips push back. This cue is subtle, yet powerful. For many squatters, it's what makes the movement finally "click," and the box squat teaches lifters to sit back like nothing else.

Note: For some lifters, particularly competitive weightlifters, it's absolutely okay to lead with the knees, so this tactic isn't wrong per se, it's just not usually optimal in the early going.

Squatting to a box provides a target – a destination. It tells you where to go and it lets you know when you've arrived. Without the box, you're just not really sure how far down to go.

3 – Ensures You're Consistent With Your Depth

You'd be surprised how inconsistent many lifters are with squat depth. This might seem like a minor point, but it's really not. Cutting depth by even an inch makes a heavy squat significantly easier.

Long term, inconsistent squat depth neuters the master principle of progressive overload. Over a series of weeks, you might manage to bring your squat from 225 pounds to 275 pounds for the same sets and reps, but if your depth is more and more shallow each workout, you really haven't made any progress at all. 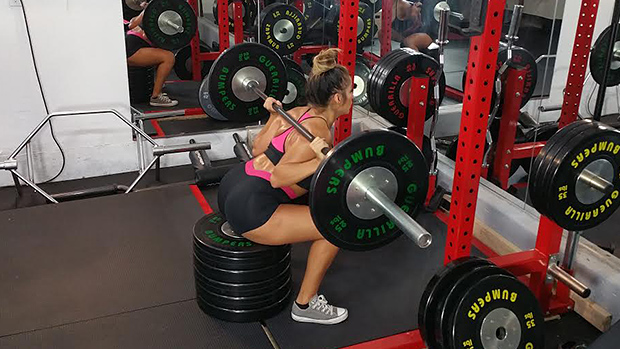 Due to an unfortunate combination of long femurs and lots of knee surgeries, my squats tend to resemble good mornings more than squats. After some experimentation, however, I found that squatting to a box, with no other changes, made my squat posture significantly more upright.

The same goes for my squat-challenged clients. You've got to actually try this to fully appreciate it, but knowing that you can use the box to stabilize yourself at the bottom makes you more likely to "risk" an upright squat posture.

Furthermore, on a standard barbell squat, if you're too upright, you risk falling over backwards. But when using the box, if your center of gravity drifts too far back, you can momentarily "check" your position on the box before ascending back to the top.

This final point is the least-appreciated benefit of the box squat, yet it's perhaps the most important: slower eccentric (negative) tempos tend to improve the muscle-building value of your squats, as well as your kinesthetic awareness while doing them.

Many people lose tightness and don't have the type of control they should have in the descent phase of the squat. During box squats, in order to avoid smashing down onto the box, you'll instinctively slow yourself down, especially toward the bottom. This makes an already great exercise even better.

First, box or no box, always squat inside the rack with safeties in position – slightly below the lowest point the bar will reach as you squat.

With that out of the way, you need to find something to squat down to (the "box"). Depending on the depth you're trying to hit, this could range from a weight room bench to a stack of bumper plates, aerobic steps, or a plyo box. In the video above, I'm using a combination of a short plyo box and a bumper plate, which gives me a 14" box. 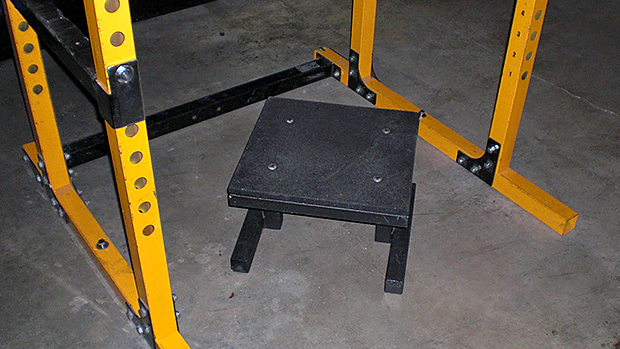 It's important that the box or platform be not only sturdy, but also non-skid. A metal plyo box on a wood lifting platform can slide, which is super-dangerous.

Box height is important, and it'll obviously depend on how deep you want to squat. While proper squat depth is the subject for another article (The Truth About Ass-to-Grass Squats), the crib notes are that you should squat as deeply as you can, provided you can maintain a neutral spine and keep your feet flat on the floor.

If your initial squatting depth isn't much to brag about, you can (and should) use gradually lower boxes as a way of coaxing yourself into those deeper positions.

Works With Other Variations Too

The box needn't be confined to the high-bar barbell squat. It's also quite valuable for goblet squats, low bar squats, front squats, and squats with specialty bars.

The bottom line is, like a good coach or training partner, box squats keep you honest. Your form will be tighter, your control better, your depth unquestionable.

If you're not recording your workouts, you're wasting your time. Here are the essentials your training journal needs to contain.
Bodybuilding, Powerlifting & Strength, Training
Charles Staley April 8 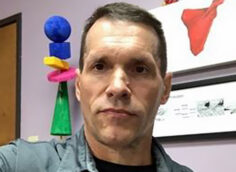 "Bill Hartman is the smartest man I know," Alwyn Cosgrove said recently at a seminar. I don't know about you, but that's pretty esteemed praise, especially from someone like Alwyn who's considered one of the foremost minds in the performance enhancement industry.
Training
Mike Robertson November 23 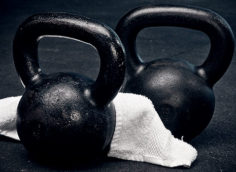